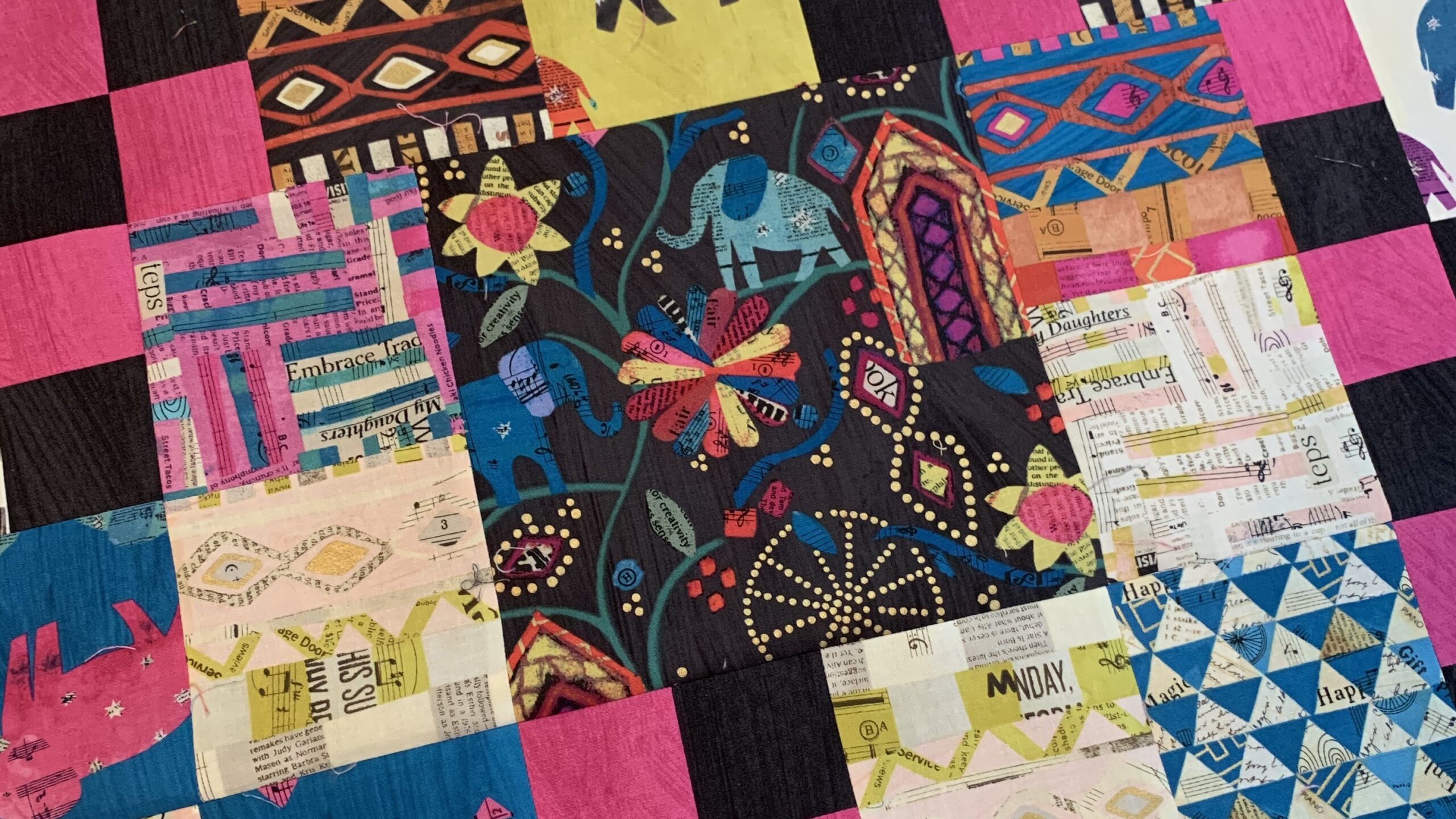 Day thirteen of staying safe at home! I was expecting to be here for ten nights in April… Well I guess I know where having plans gets you.

We were supposed to be in England today, hanging out with my dad and maybe making a trip to my sister’s store in Eye to make a few purchases for my summer wardrobe 🙂

Instead, here I am sitting at the kitchen table trying to make sense of what I have been up to during the past almost two weeks. I really don’t want to waste the unexpected break in my usual routine so I have been making things…

I took a picture of a mirrored wall in California. 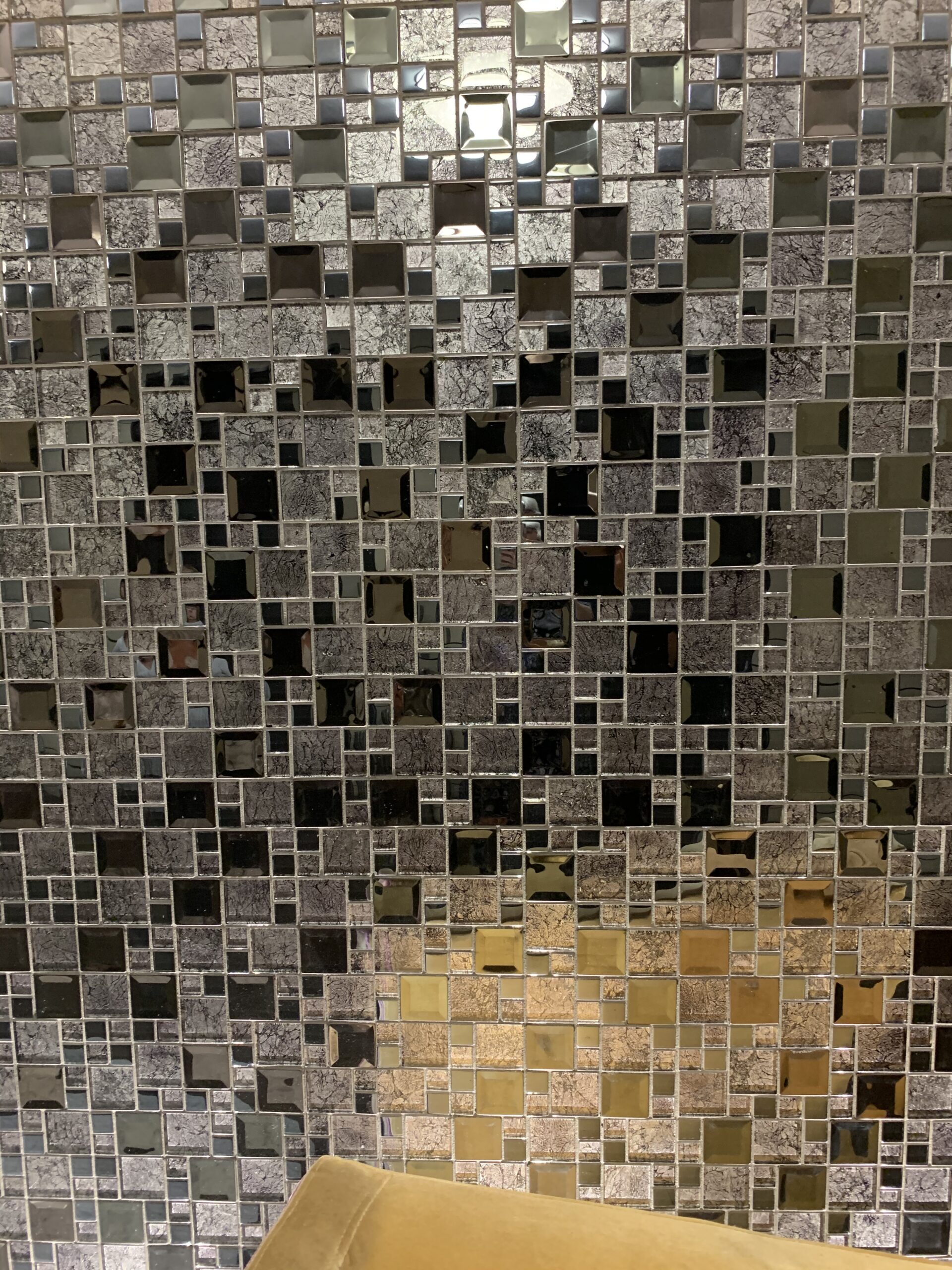 It wasn’t very beautiful but it seemed like there must be a repeating pattern in there somewhere? I looked and looked and came up with something  I could work with. I had a stack of  Charley Harper Barkcloth fat quarters I bought from Birch Fabrics at Quilt Market last October and set to work.

I have to admit, it had been a while since I had sat and pieced at the sewing machine… It took me a little while to get back in the groove but I did it. I made a 48″ square quilt top comprising four large blocks. 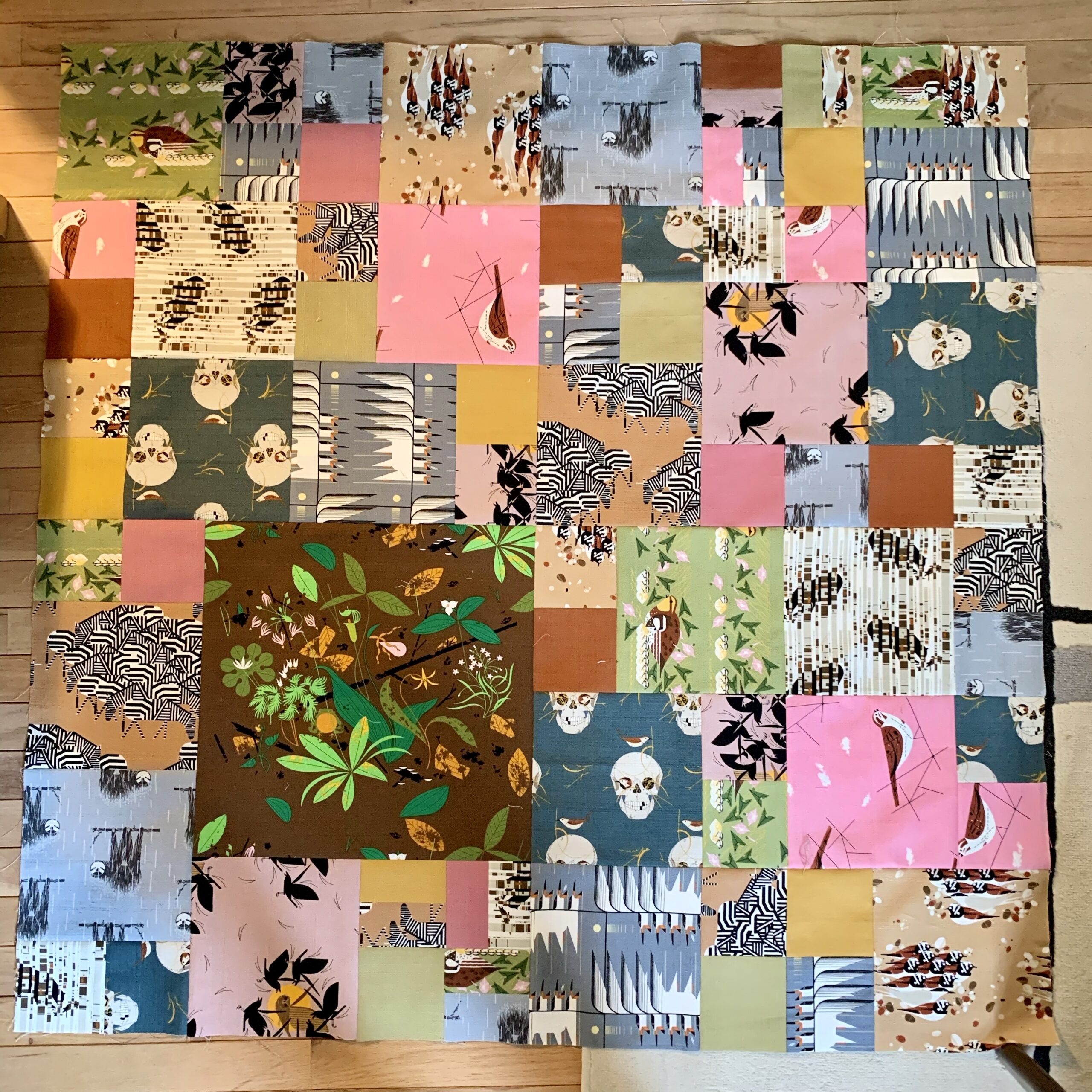 The family are not too sure about the skull fabric. It’s certainly not my first choice when I think of quilting fabrics but look past the skulls to the sloths?

How about trying the same pattern with the Carrie Bloomston stack from Windham Fabrics?  (Wish, shipping to quilt stores now!)

I cut LOTS of pieces and set to stitching…

Two and a half inch strips became pairs of squares, 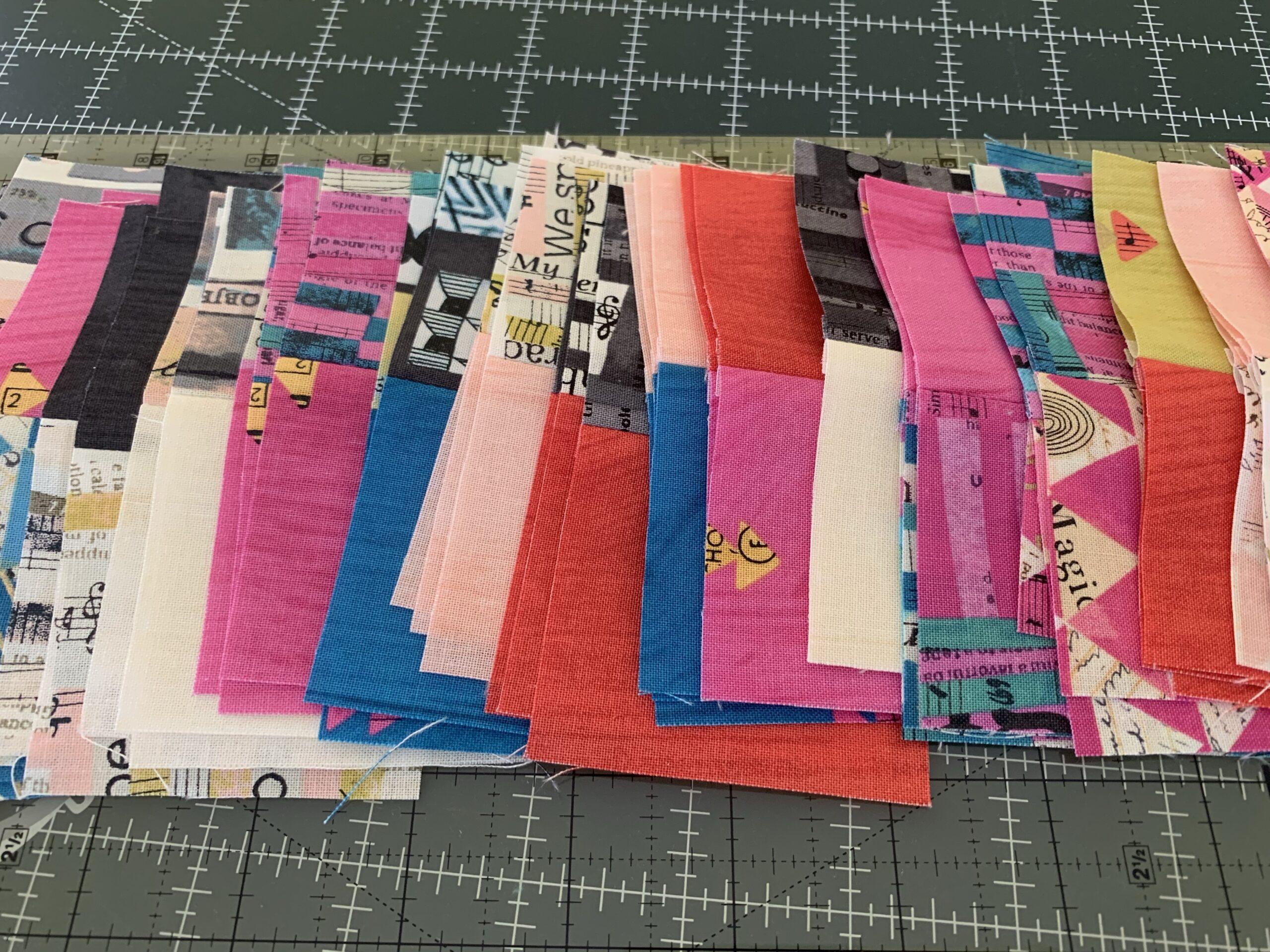 The pairs were added to four and a half inch squares, 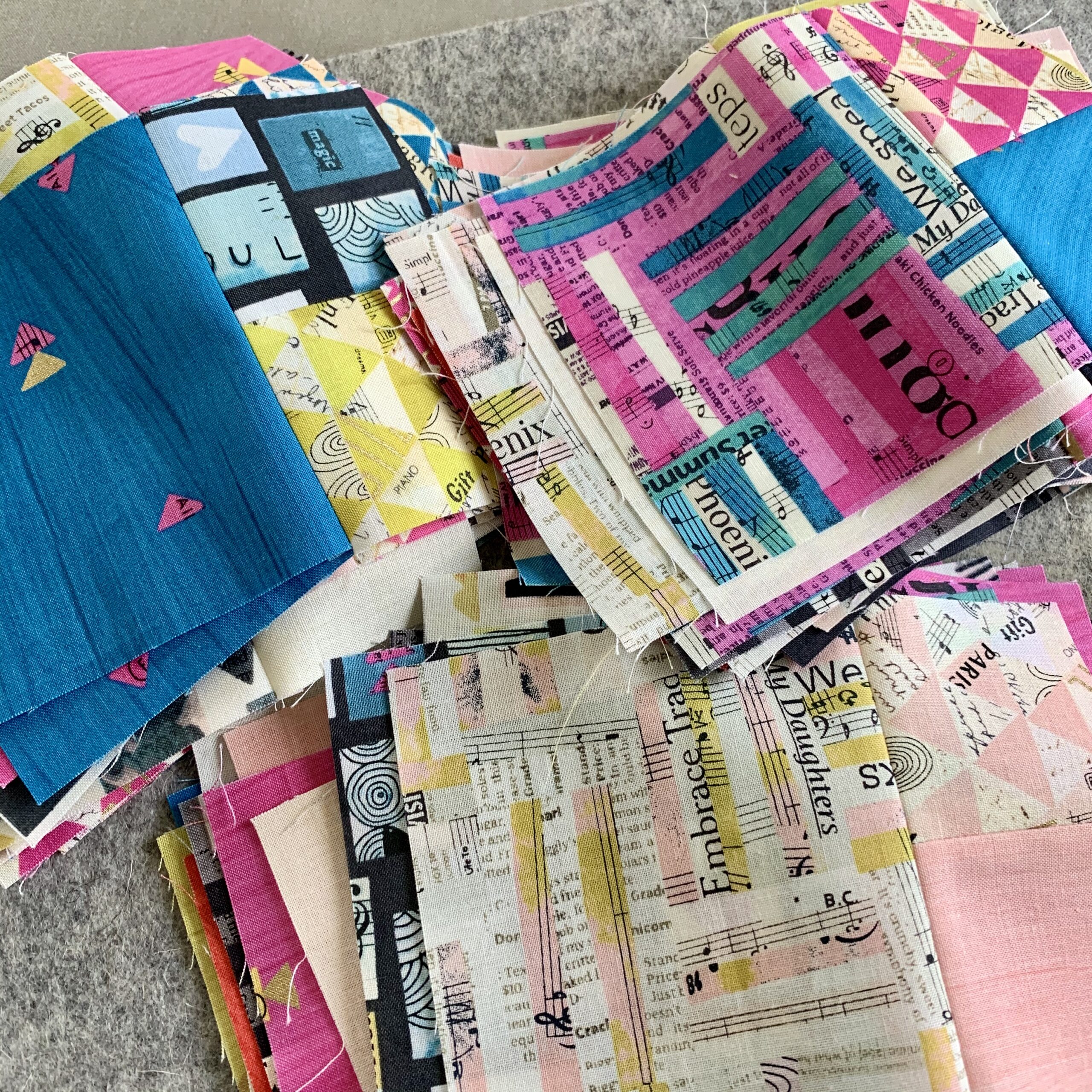 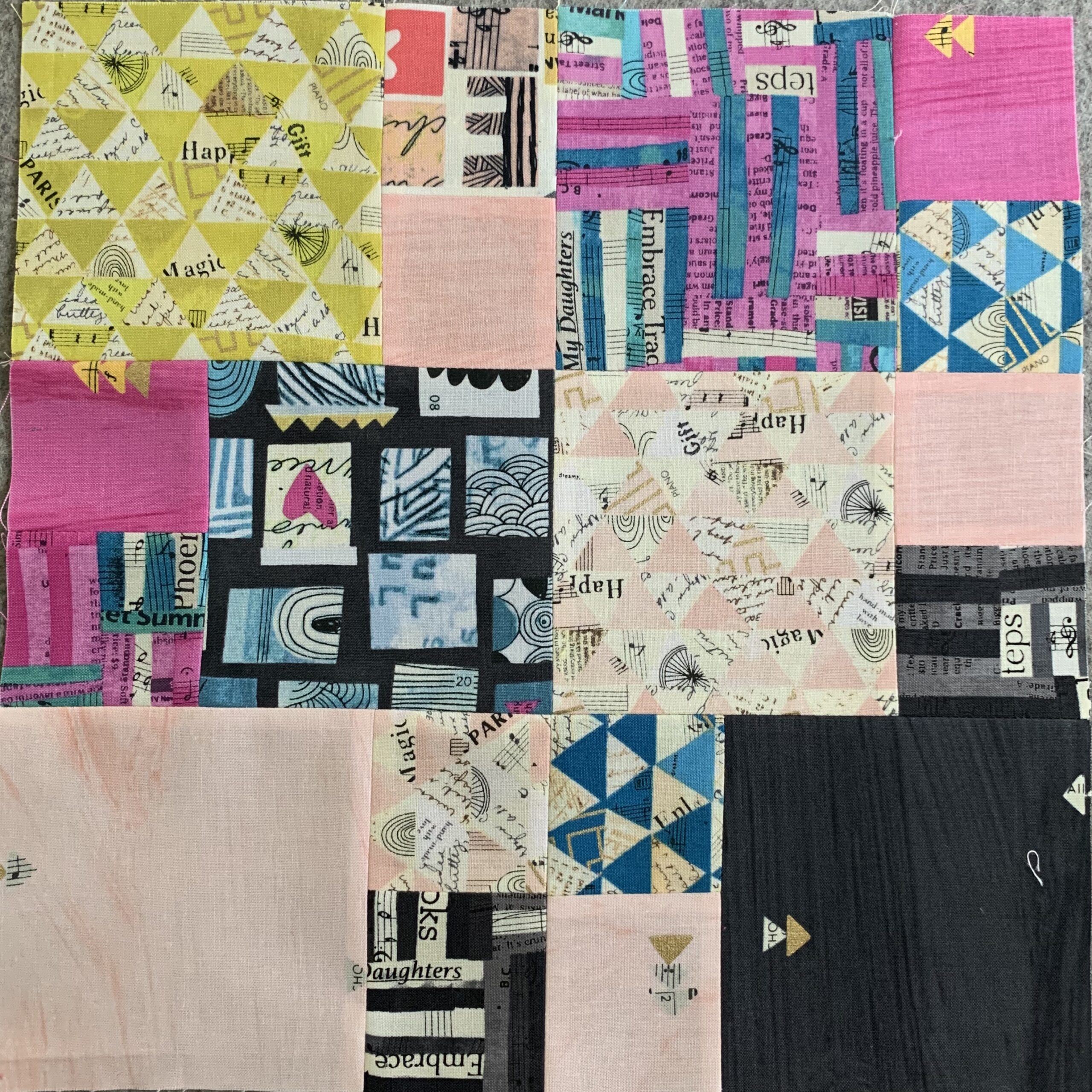 All the seams were carefully pressed open for a nice flat finish. 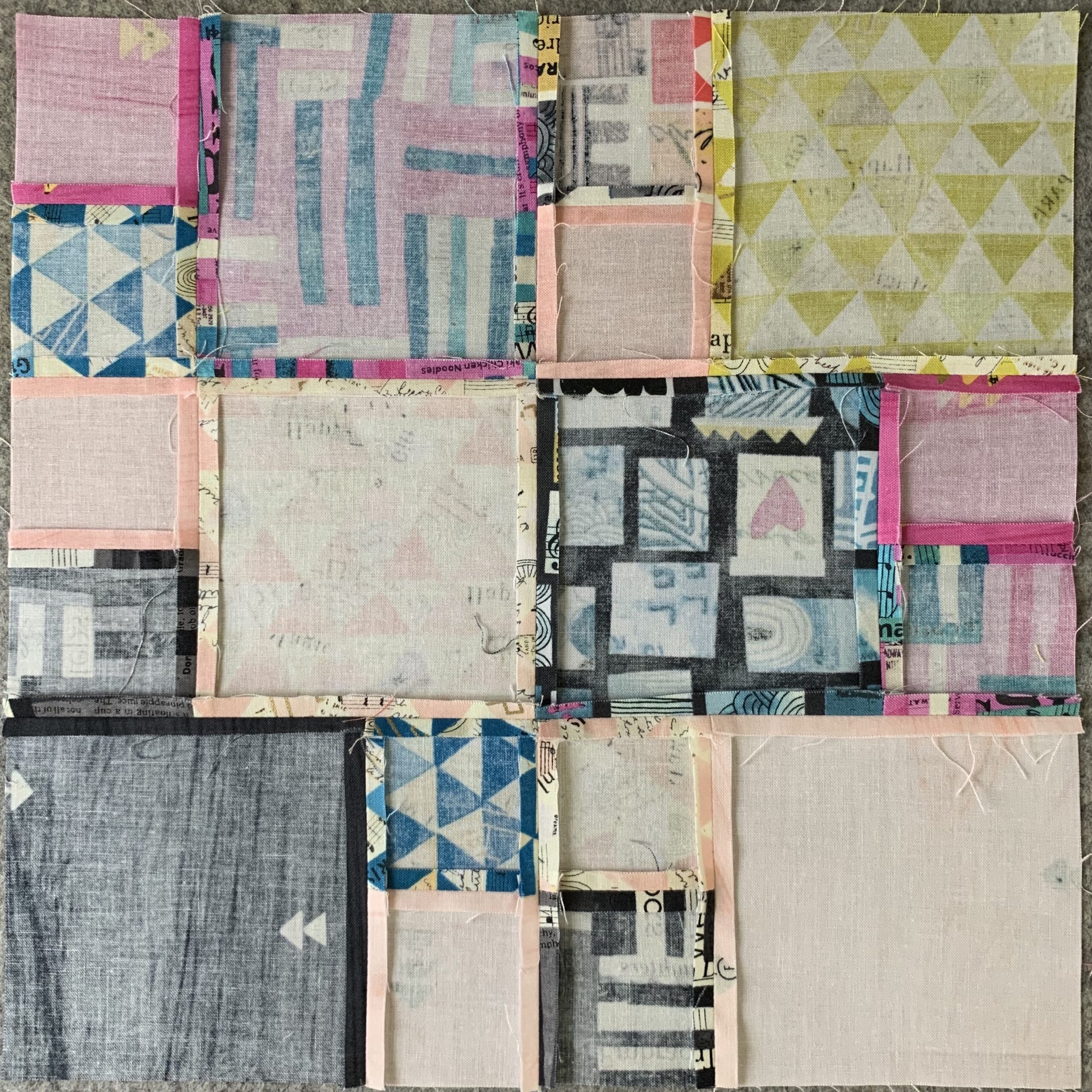 Nine blocks made, I started arranging them and realised I hadn’t quite arranged the pieces the way I had drawn it on my paper… Oh well, I’m not going to rip them apart after all that work, we’ll just go with what we’ve got… 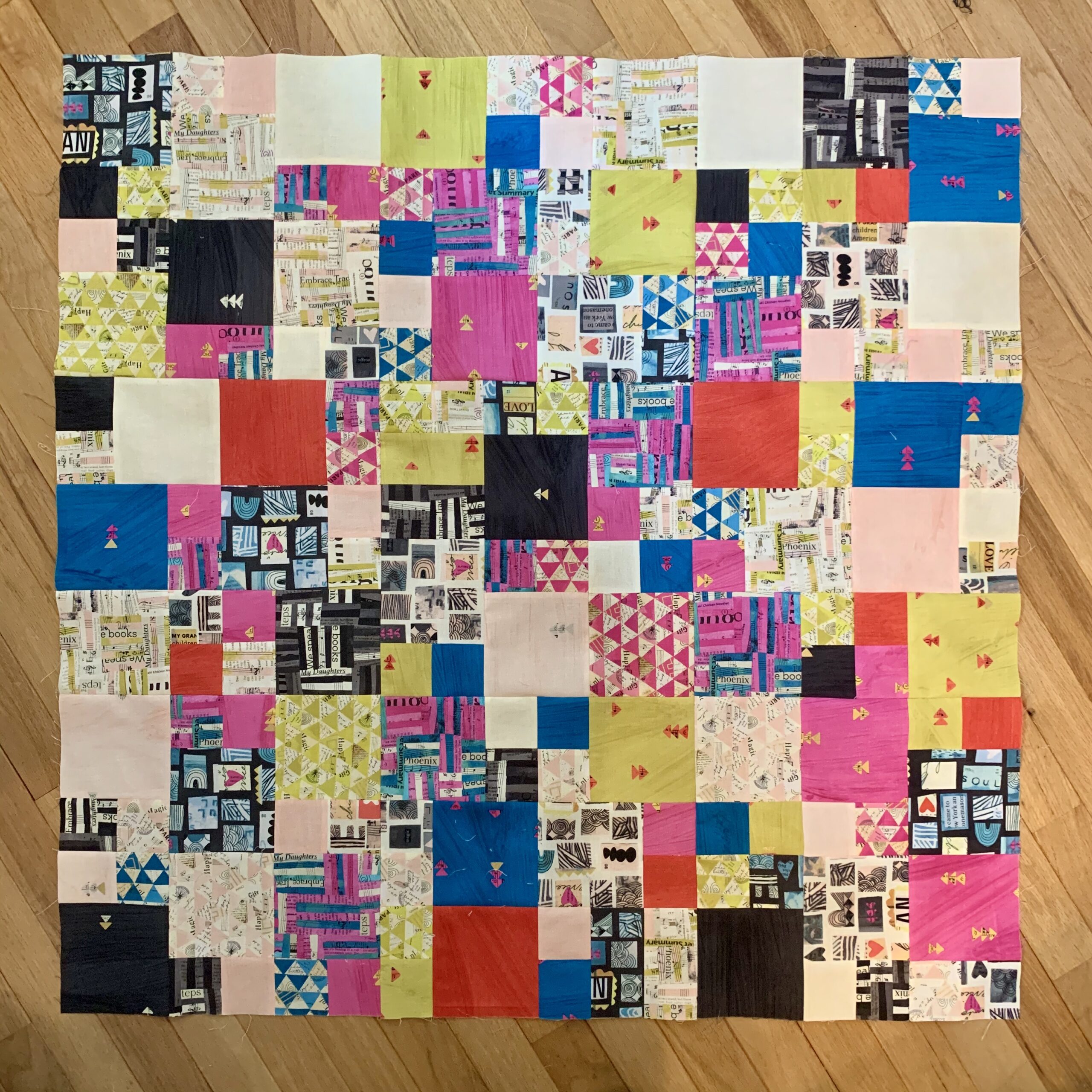 Try again with some of those other pieces… 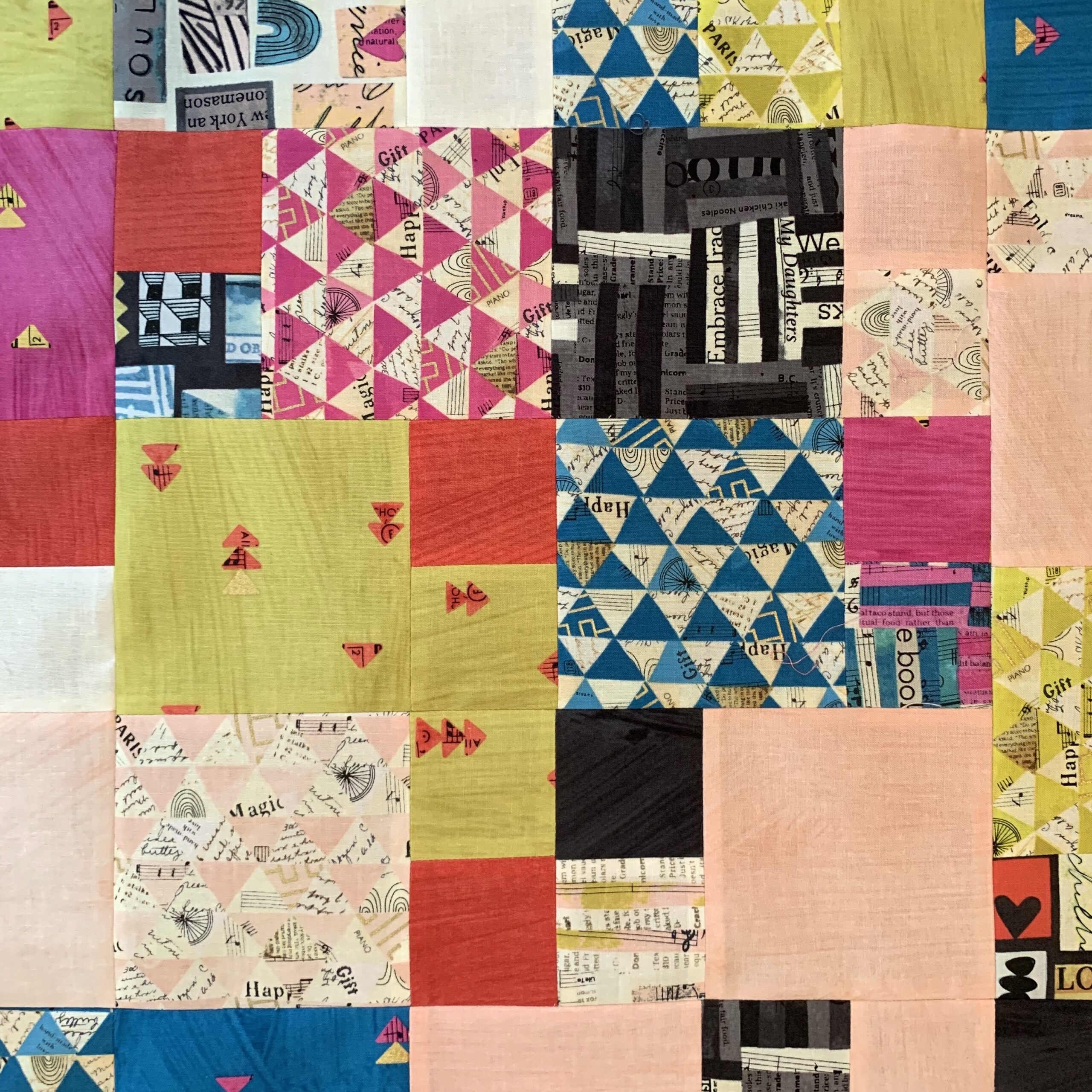 Can you even see the difference? 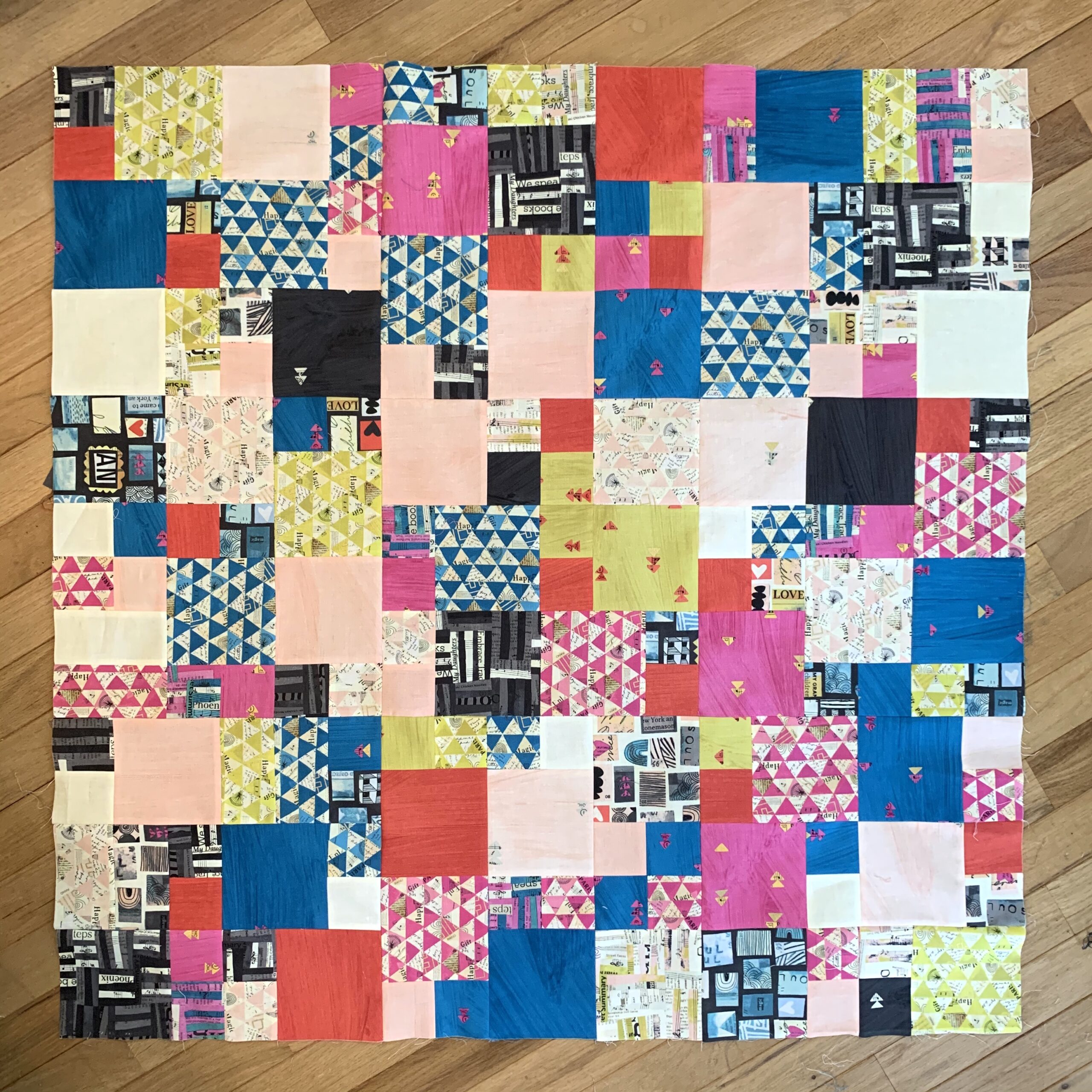 I love the fabric but it’s all a bit of a jumble. I still have some of the more solid blender fabrics. Perhaps they will help? 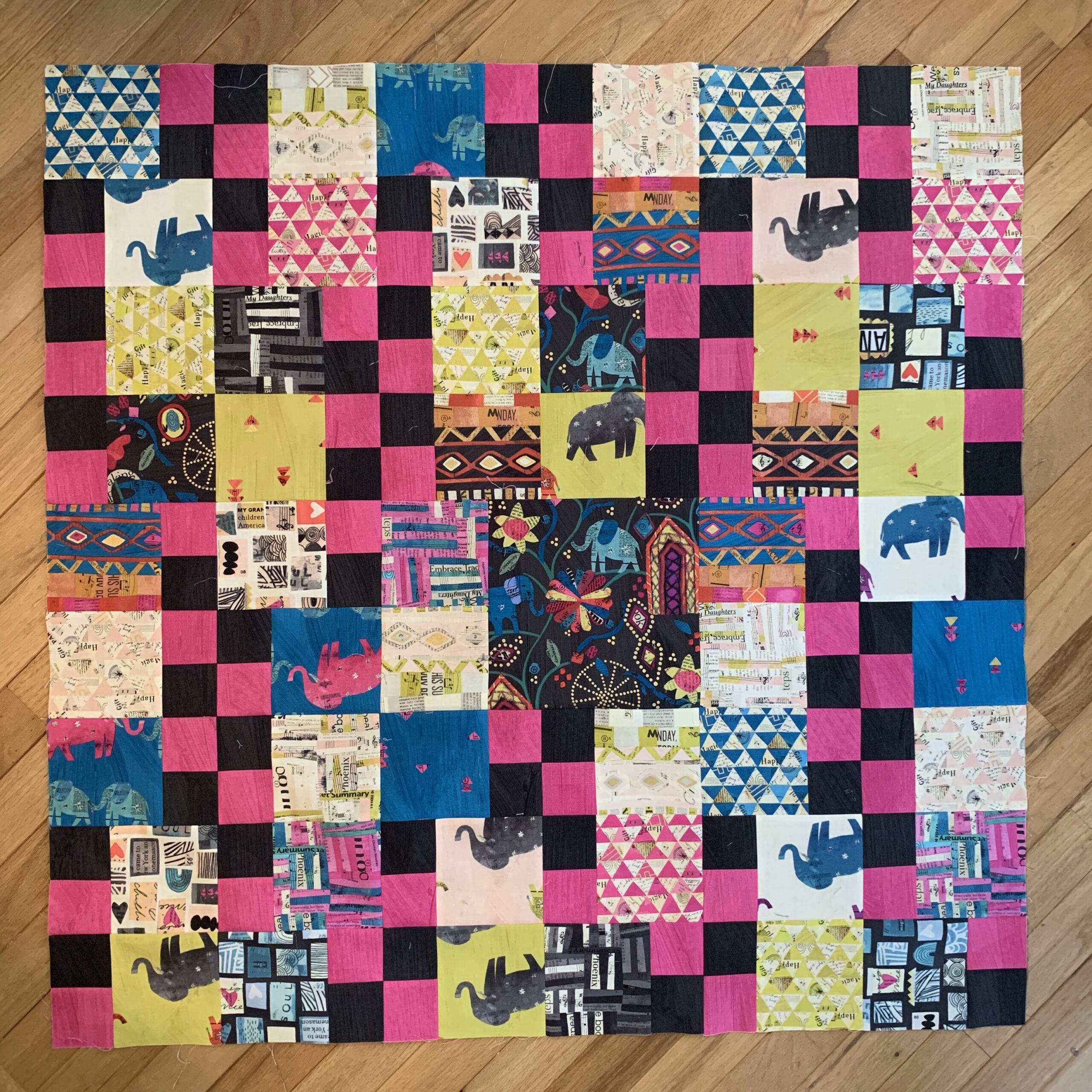 I realised the block didn’t work quite the way I thought it did and had to modify the lay out a little. I also wanted to include a bigger piece of that focus fabric. It seemed a shame to cut it all up small?

I still want to work on the design. I have an idea that involves making two almost the same but slightly different blocks. But I was done piecing for now. I basted tops two and three and set to quilting…

If you have ever taken a class with me you will know that I often suggest using the serpentine stitch for a quilt that is going to be washed a lot. Here I am using the built in BERNINA even feed system and 20D foot. (The edge of the foot goes against the hill of the last row.) 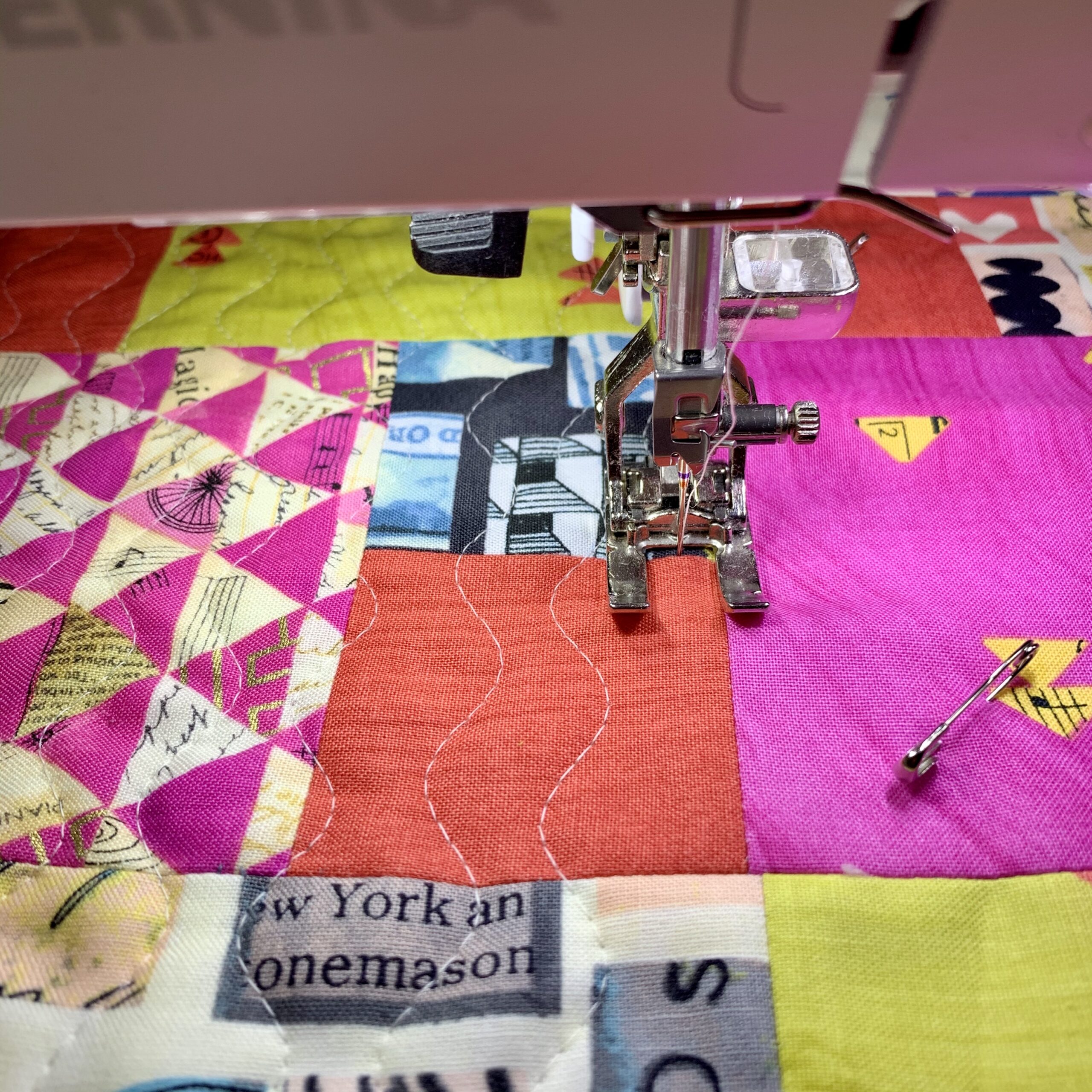 Every so often I came across another lovely thought that Carrie has included in her fabrics. 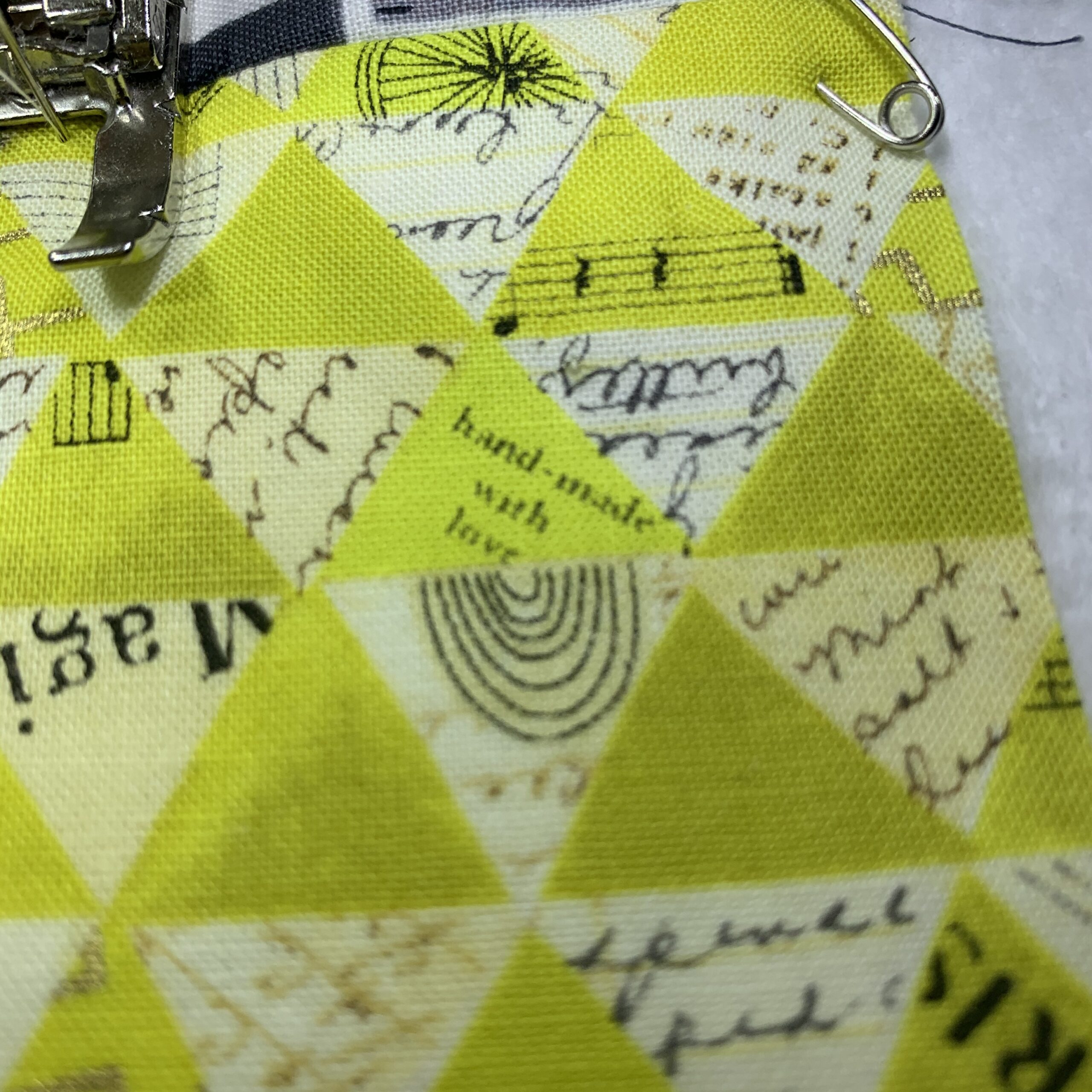 I quilted top three with a grid to emphasize the design, trimmed the quilts and put them to one side for binding later. 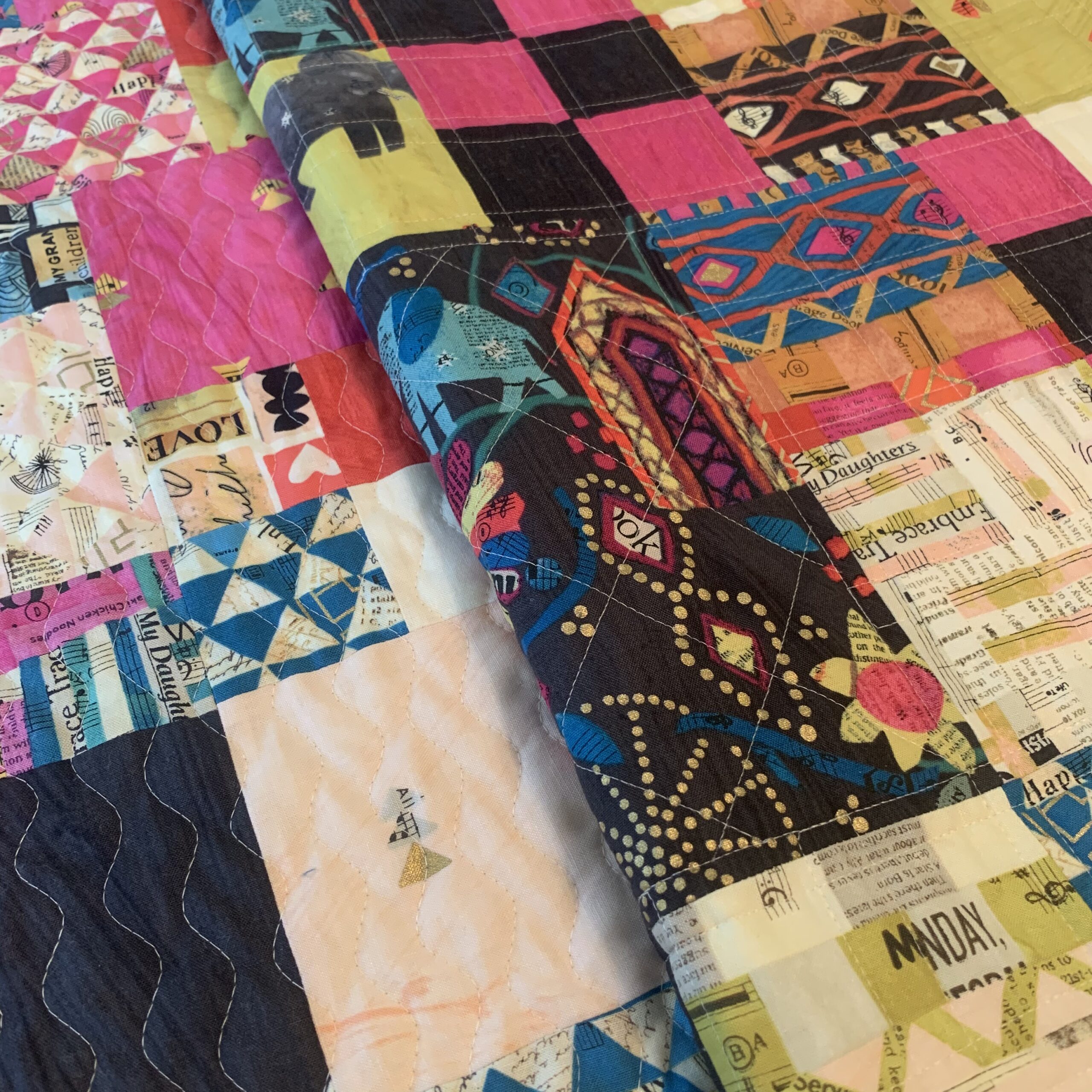 Meanwhile I had a new project on my knitting needles. I had bought three skeins of sport weight yarn from Spincycle in Santa Clara. It was a little pricey to be left in the bag (!!)… I finished the Shift Cowl by Andrea Mowry for Drea Renee Knits after a week’s worth of evenings… 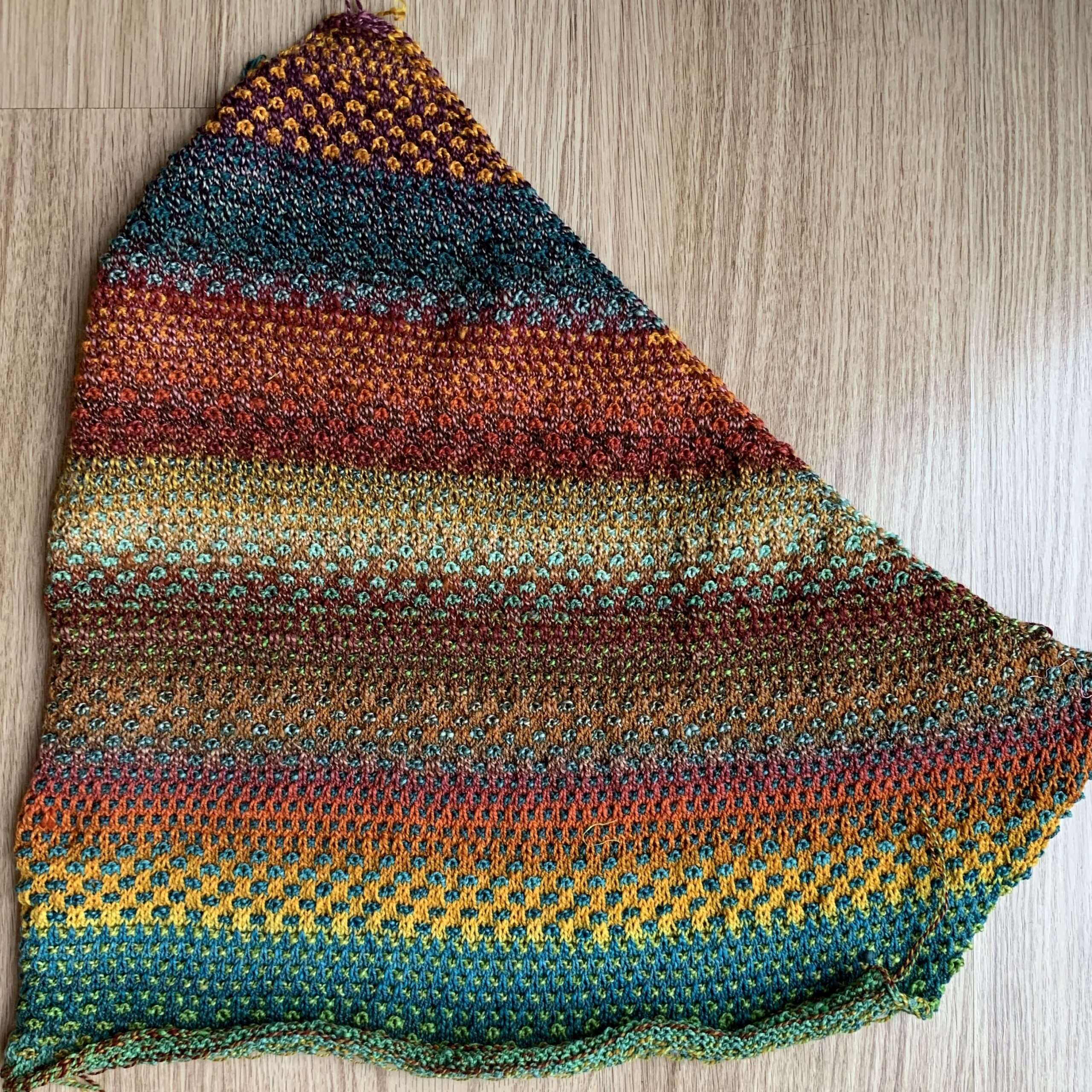 All those trips to STITCHES events have finally made an impression! The pattern came with blocking instructions and I decided to give it a go… 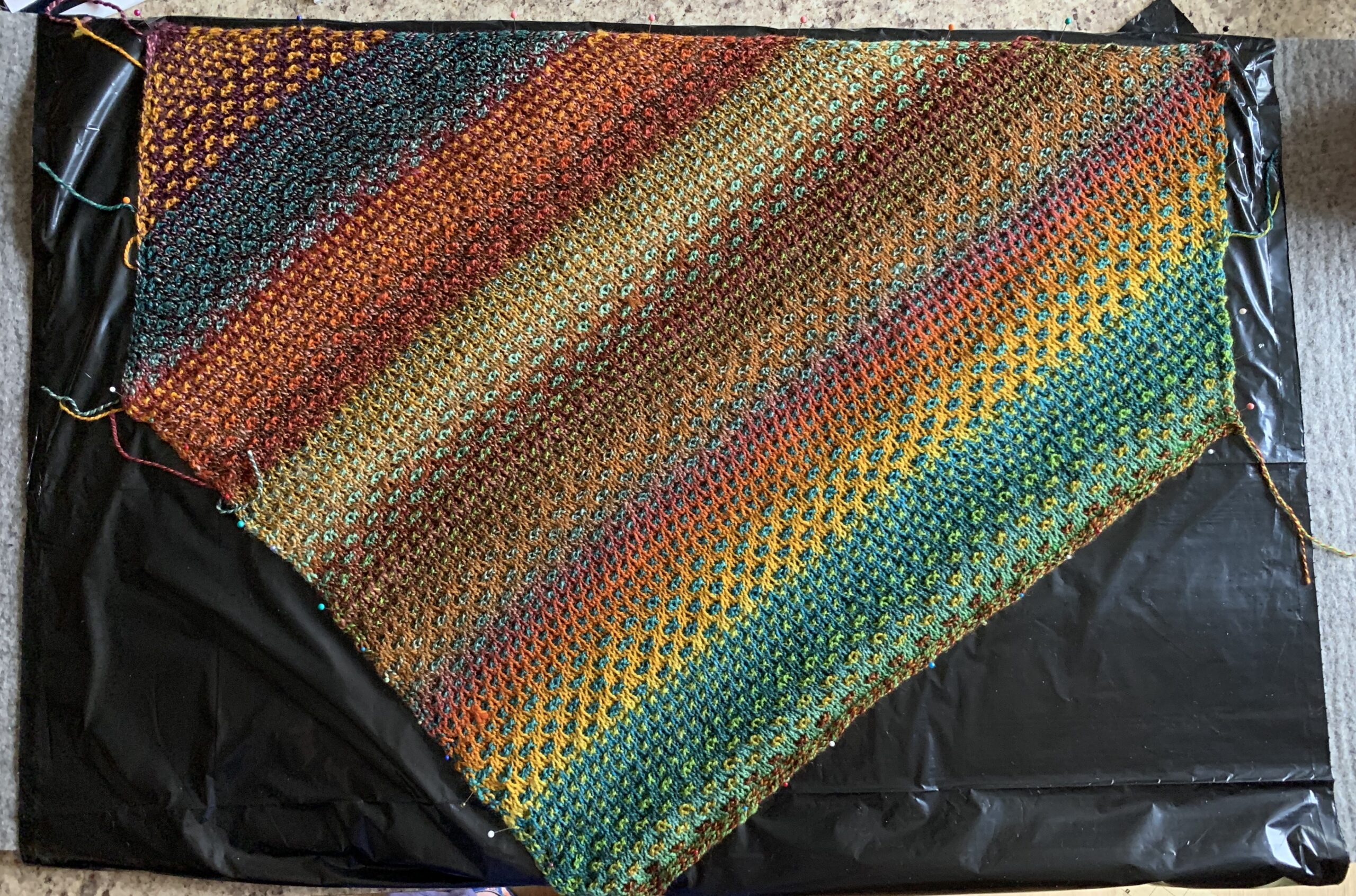 I put a black garbage bag ( a new one) on top of a wool pressing mat and after soaking the piece for 15 minutes in lukewarm water, pressing the water out in clean towels I pinned it all out nice and straight and left it to dry.

It worked! All the edges lie flat, the stitches are all even… I sewed the ends in, stitched the one seam and ta-da! 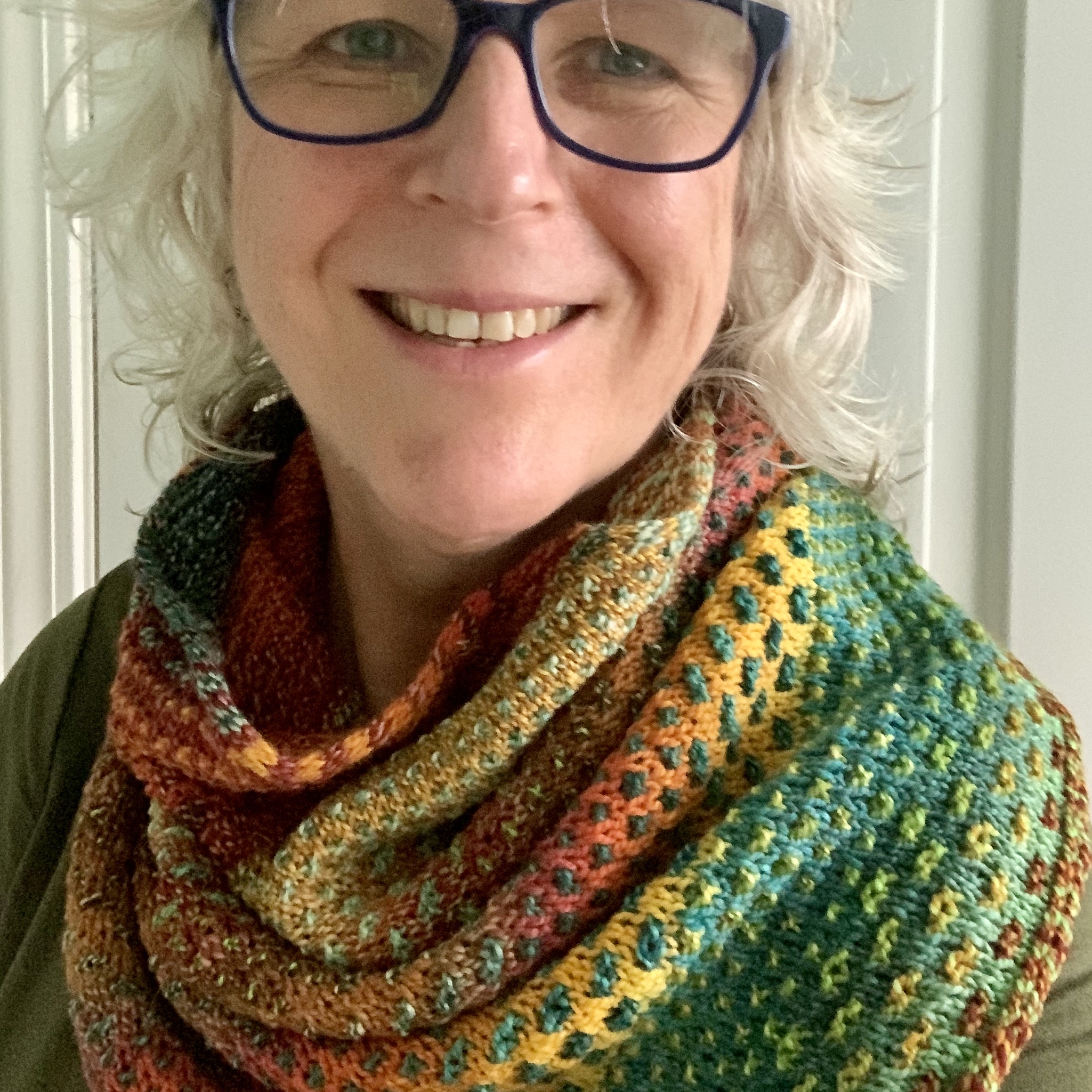 I have also been doing a little hand embroidery. I have drawn out eight flowers (so far) and Julia had been cleaning them up for me, ready to stitch.

I started with a primrose, 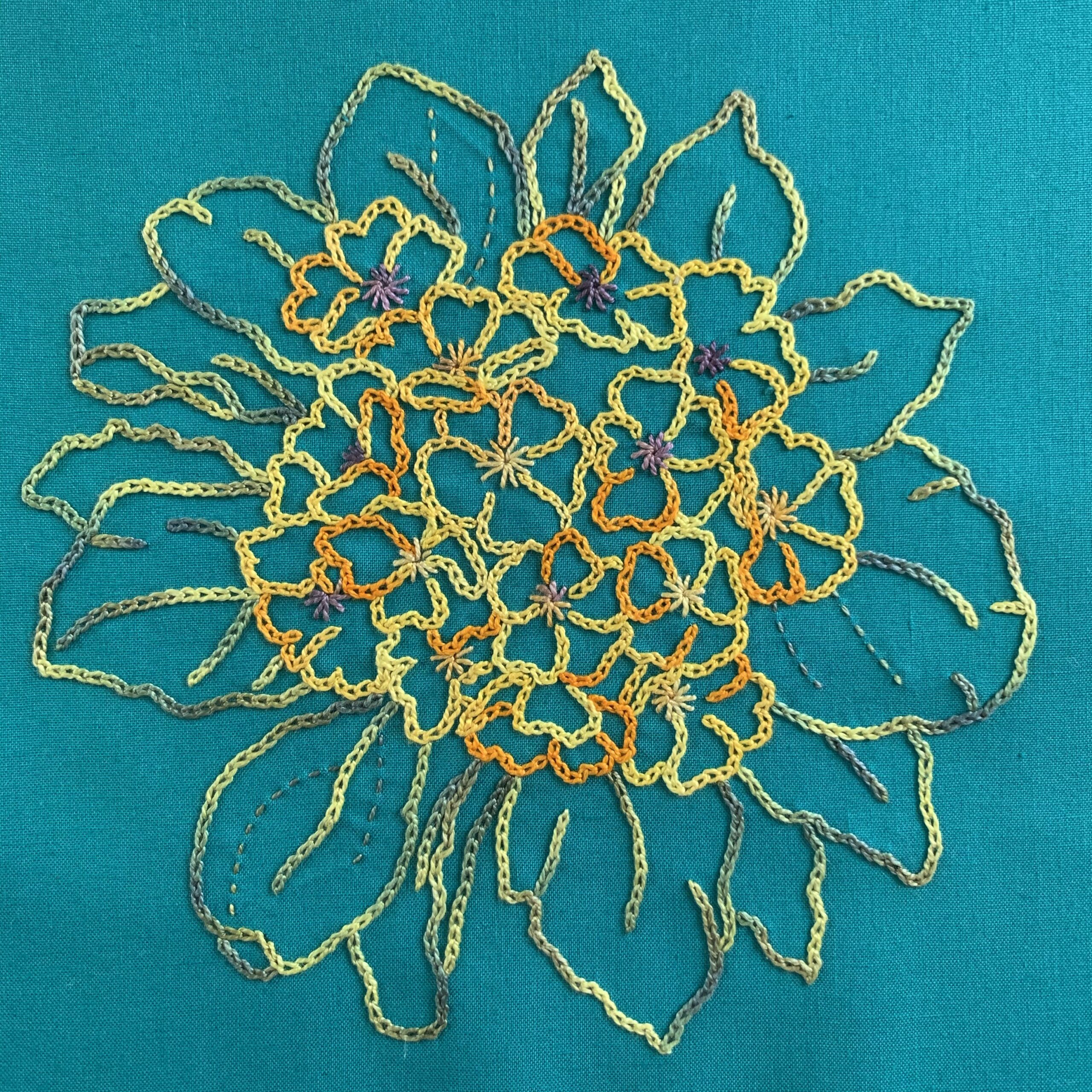 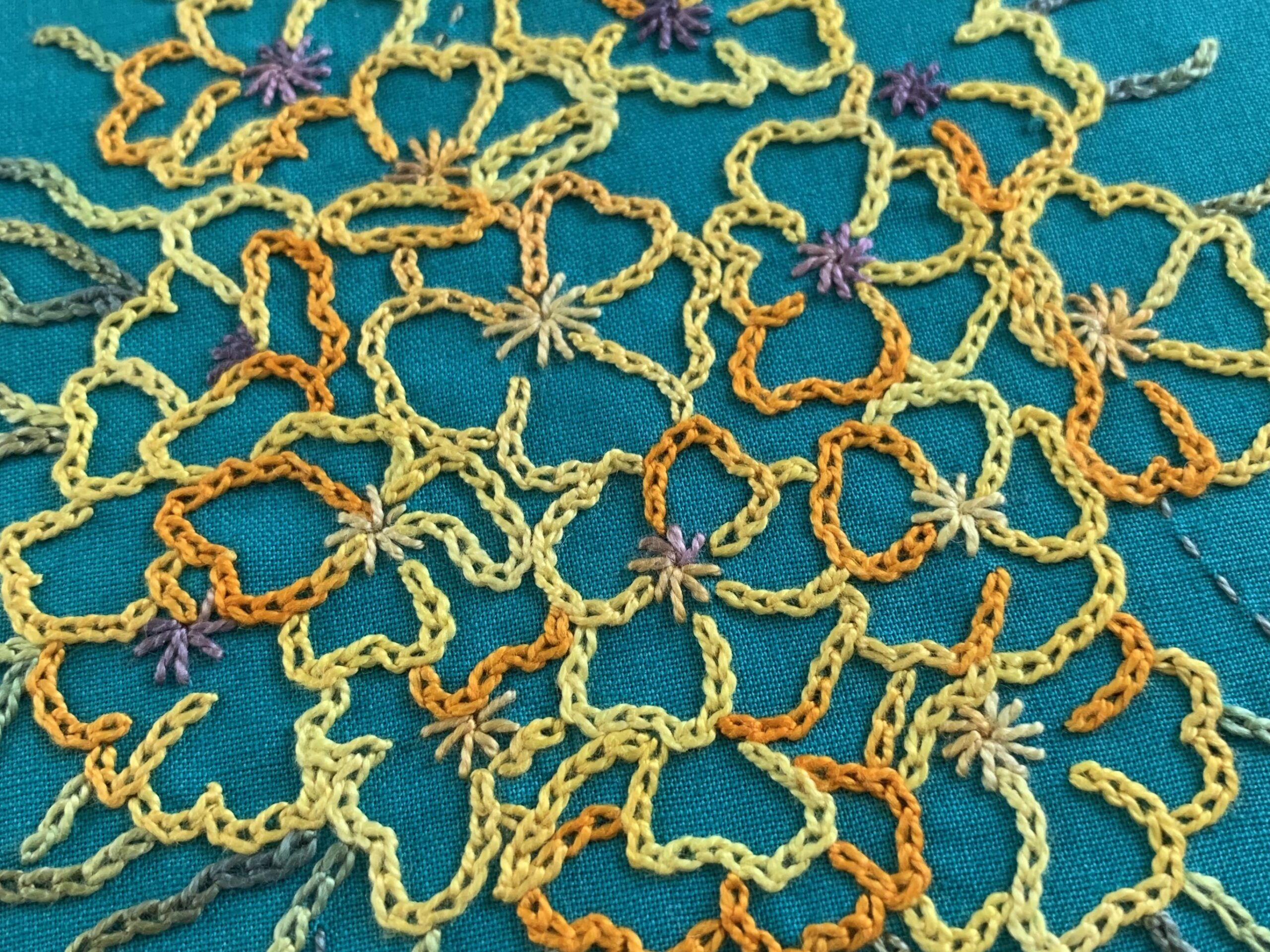 and just finished a poppy. 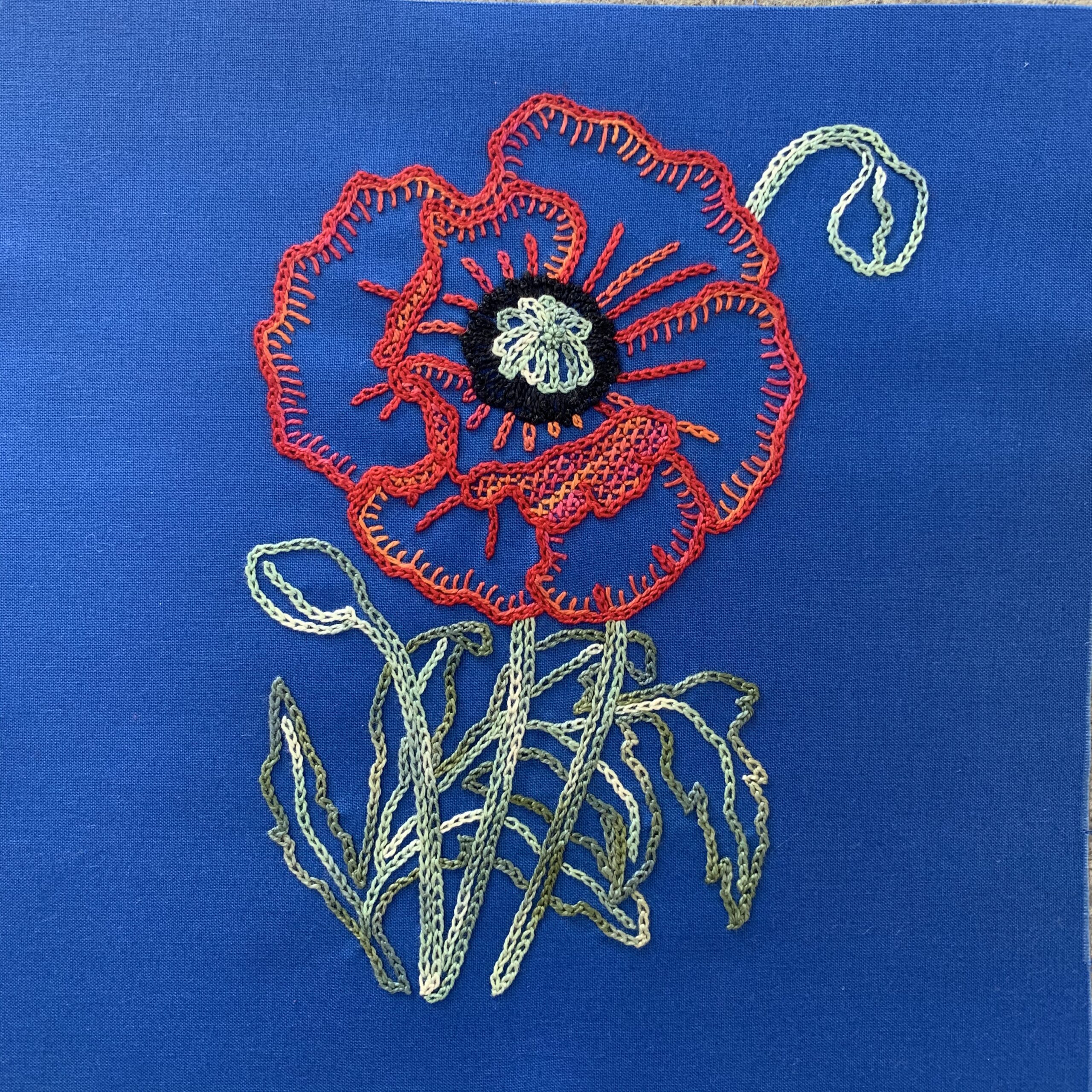 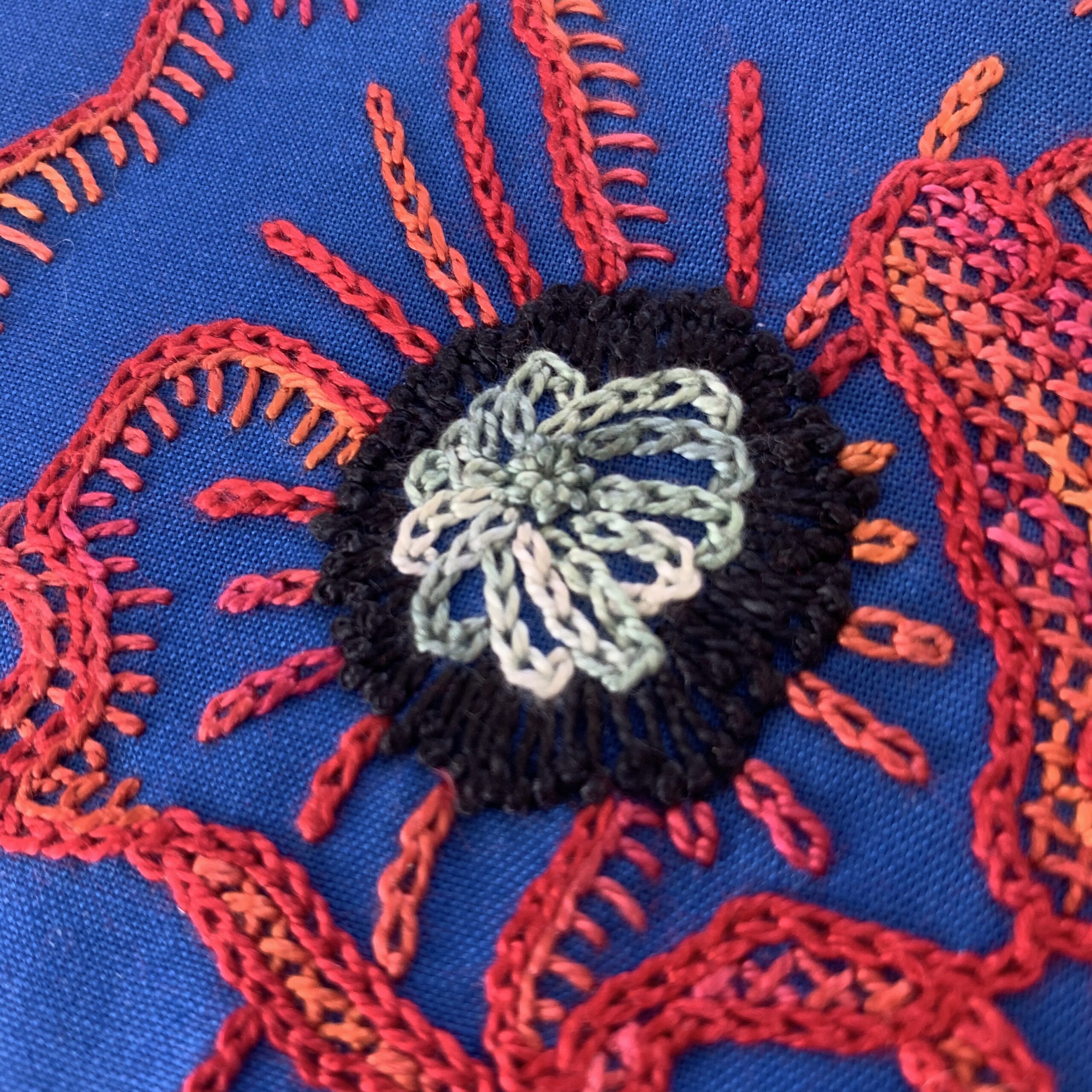 Next up will be a tiger lily and then a daffodil…

They are stitched with my favorite House of Embroidery hand dyed threads available from Global Artisans. House of Embroidery in South Africa is shut down for the moment but Global Artisans has a good stock and is still shipping… There is a 20% discount on all online sales right now… a good time to go shopping and an opportunity to support one of my favorite small businesses 🙂

And yes there is more… I have been working on a series of white(ish) whole cloth quilts… I’ll leave them until next time. If you follow me on Facebook or Instagram you will have seen some pictures. I’m trying to post something every day while I am at home. I’ve even learnt a new trick… 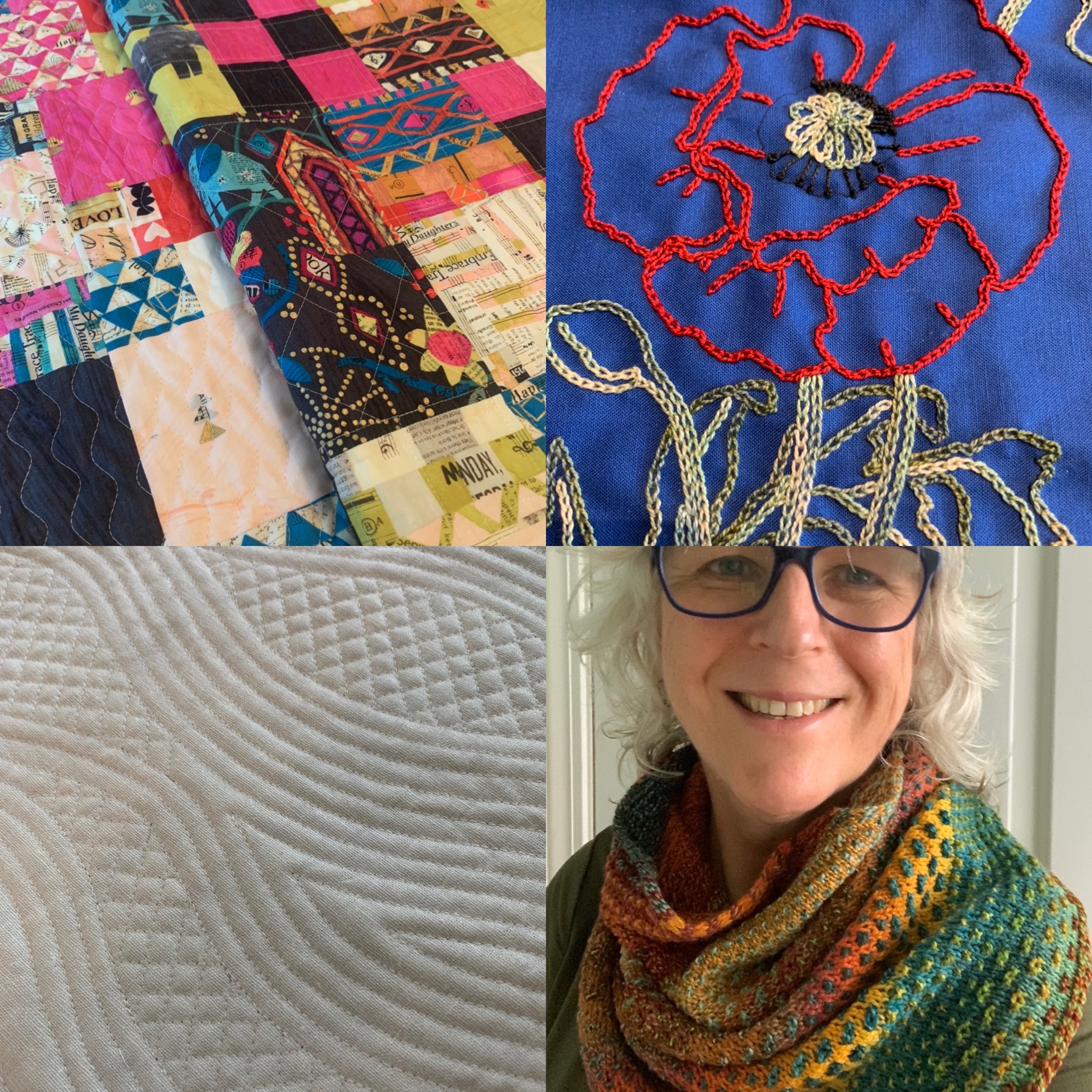 I might be unstoppable after twelve weeks at home?