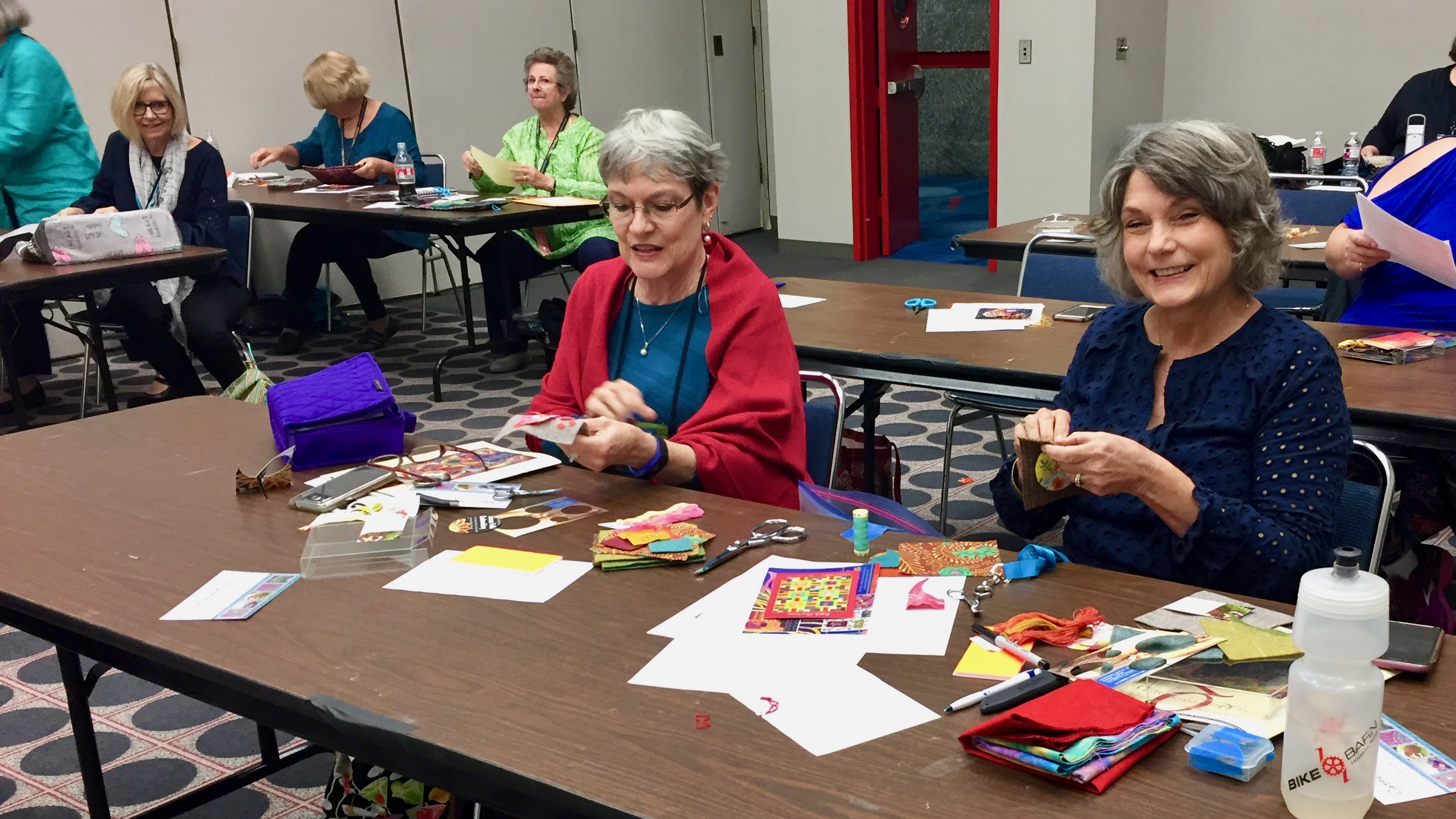 I had three and a half days of classes booked at Quilt Festival this year, then there were two lectures, eight hours of Open Studios and two Meet the Teacher lectures…

I started Monday morning with Introduction to Wool Appliqué. Once class started we just had one space, with 24 enrollees including a few that had initially signed up for a fabric dyeing class that was cancelled. They switched to wool appliqué because it was described as beginner friendly and they only needed to bring scissors and a pencil!

The ladies at the top of today’s blog post were in the class. They seem happy? 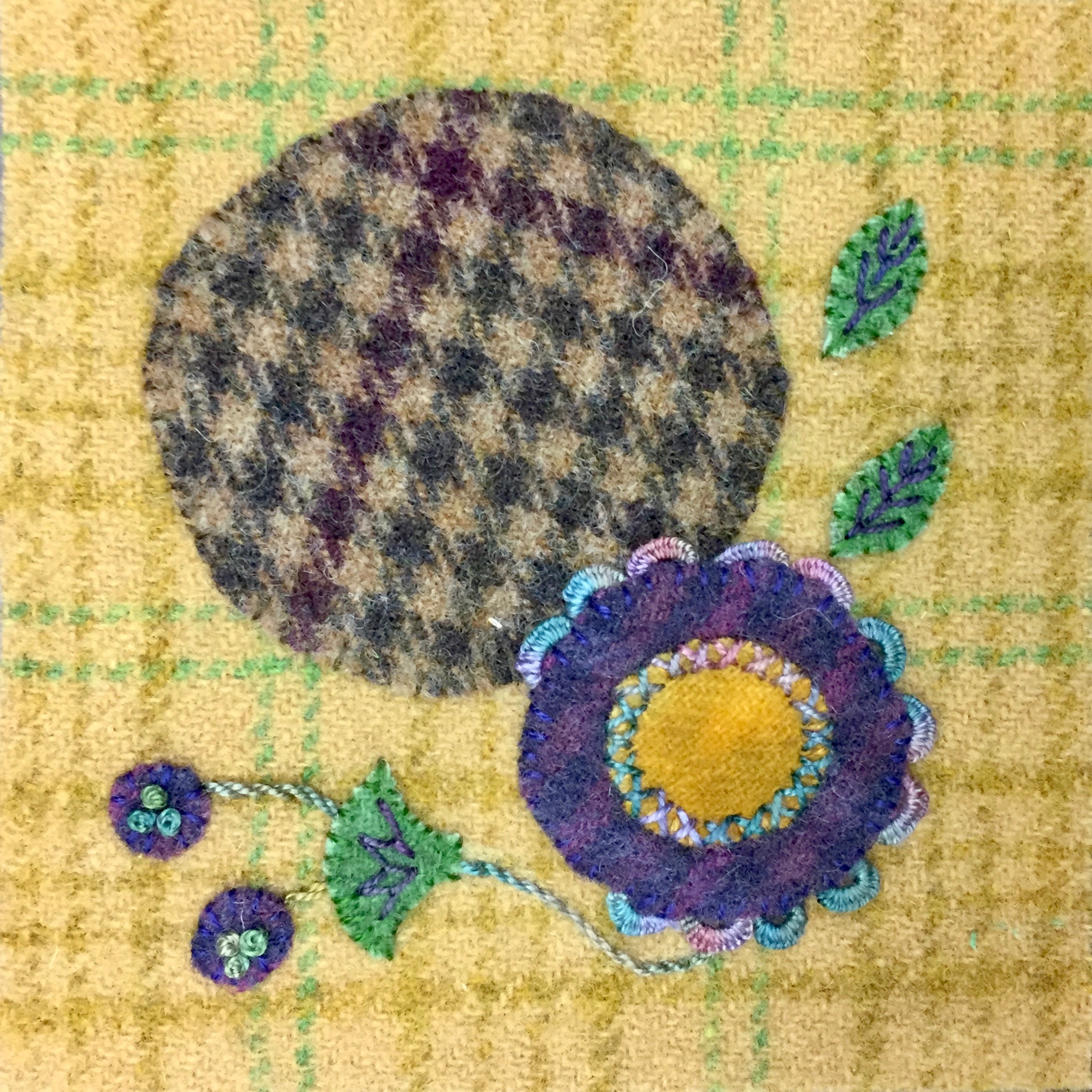 In the afternoon a new, completely full class tried some Dimensional Embroidery Stitches, definitely not for beginners!

We stitched on some small samplers, using both 8 and 5 weight perle cotton. 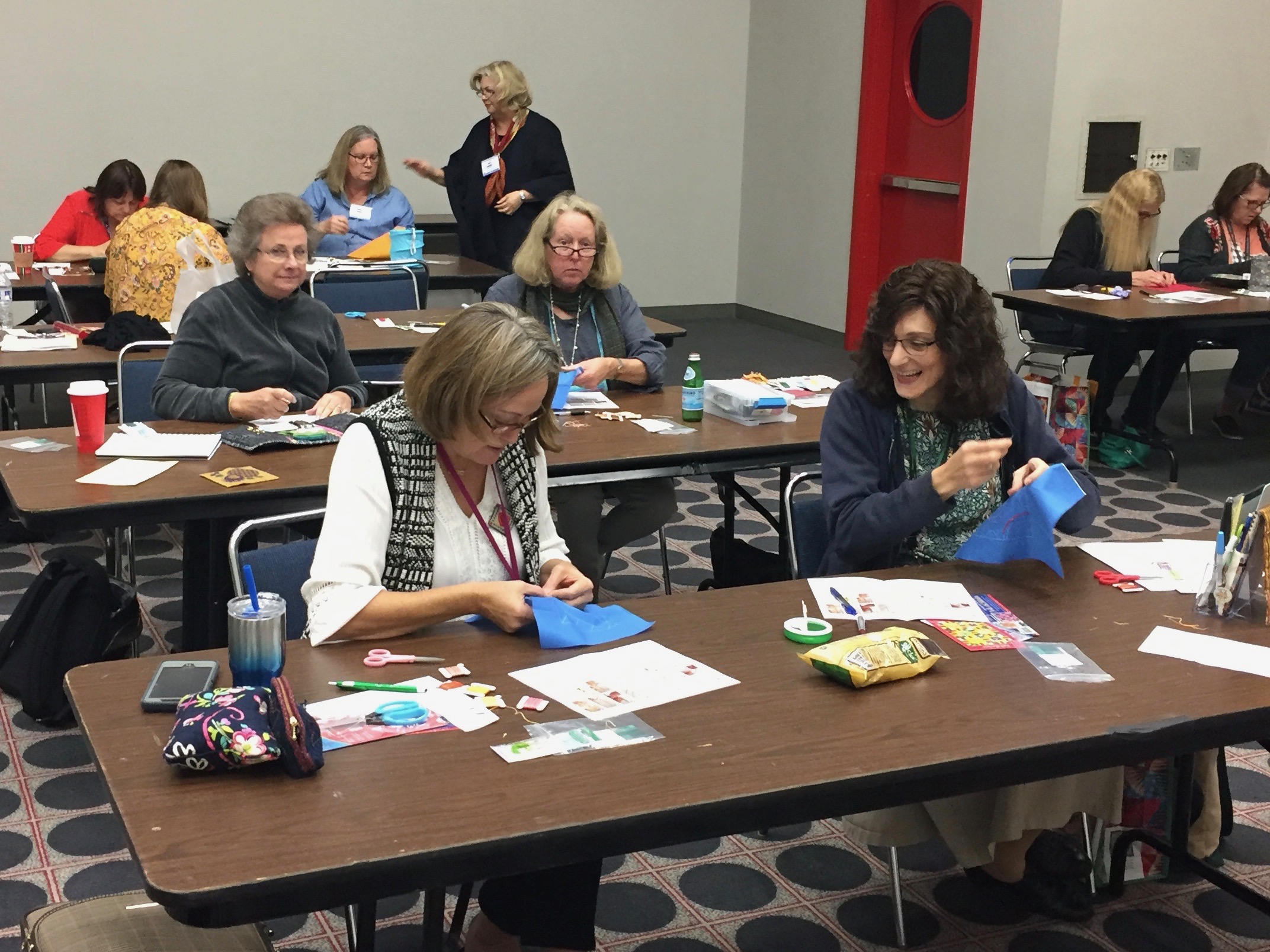 A good day with a very pretty sunset! 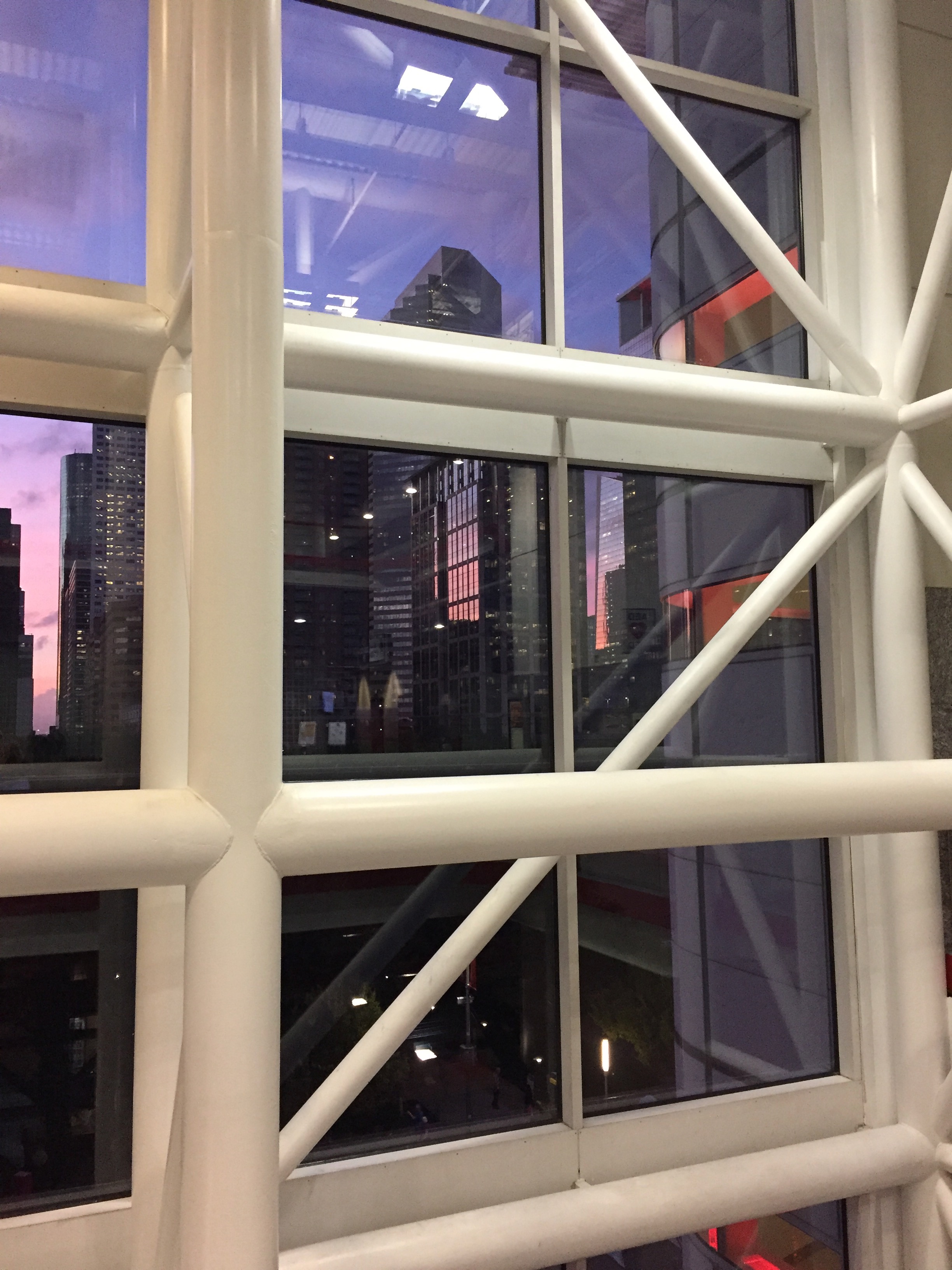 On Tuesday I was in the Babylock room all day for six hours of Walking Foot Quilting. It was another full class. 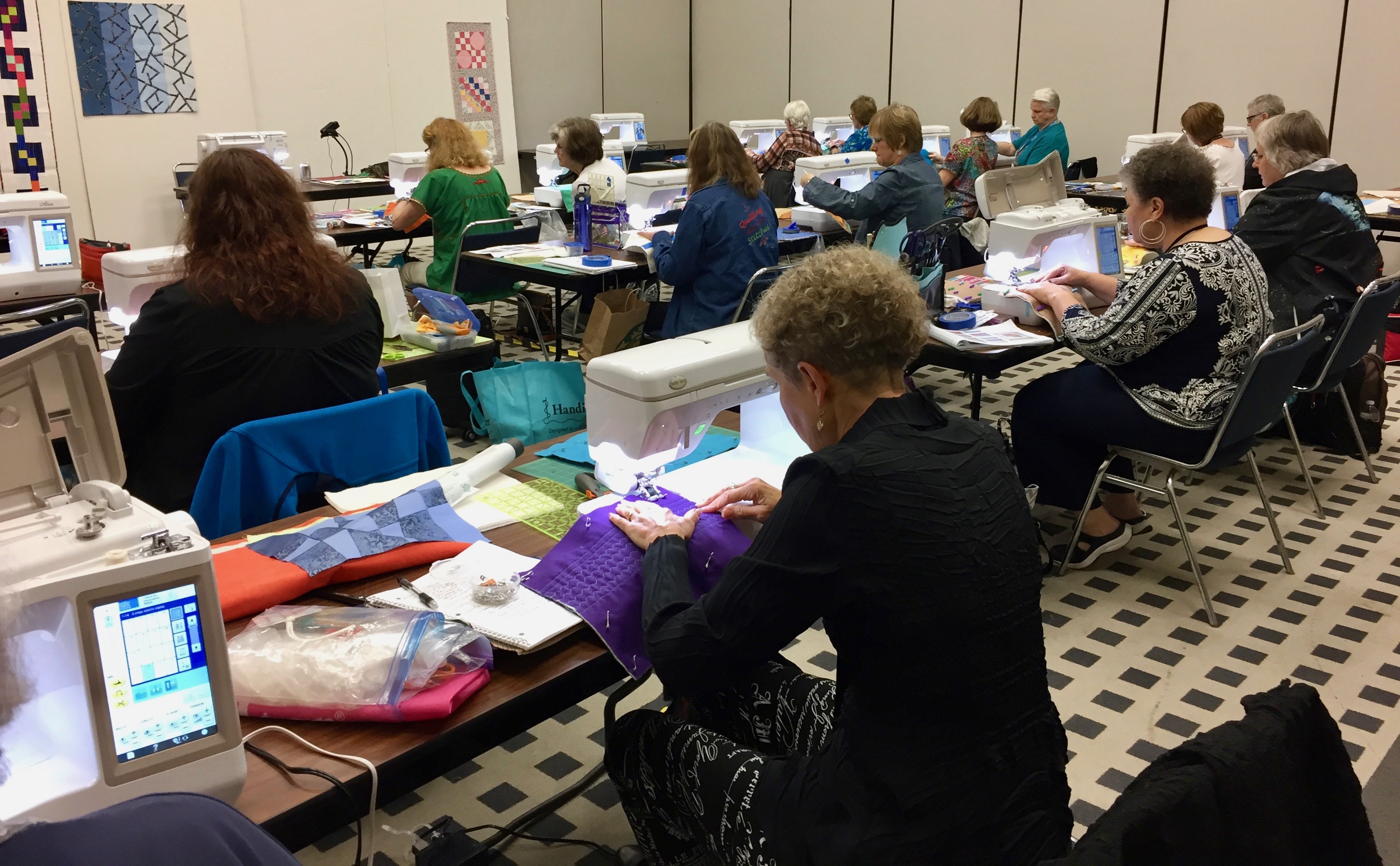 The machines performed well although we were all happier once we worked out how to turn the beeps off… Twenty six beeping machines in a room were just too much?

It was the prize giving ceremony on Tuesday evening, always a good time, celebrating with the winners.

No time to relax too much. On Wednesday morning it was back to the class room, BERNINA machines this time. 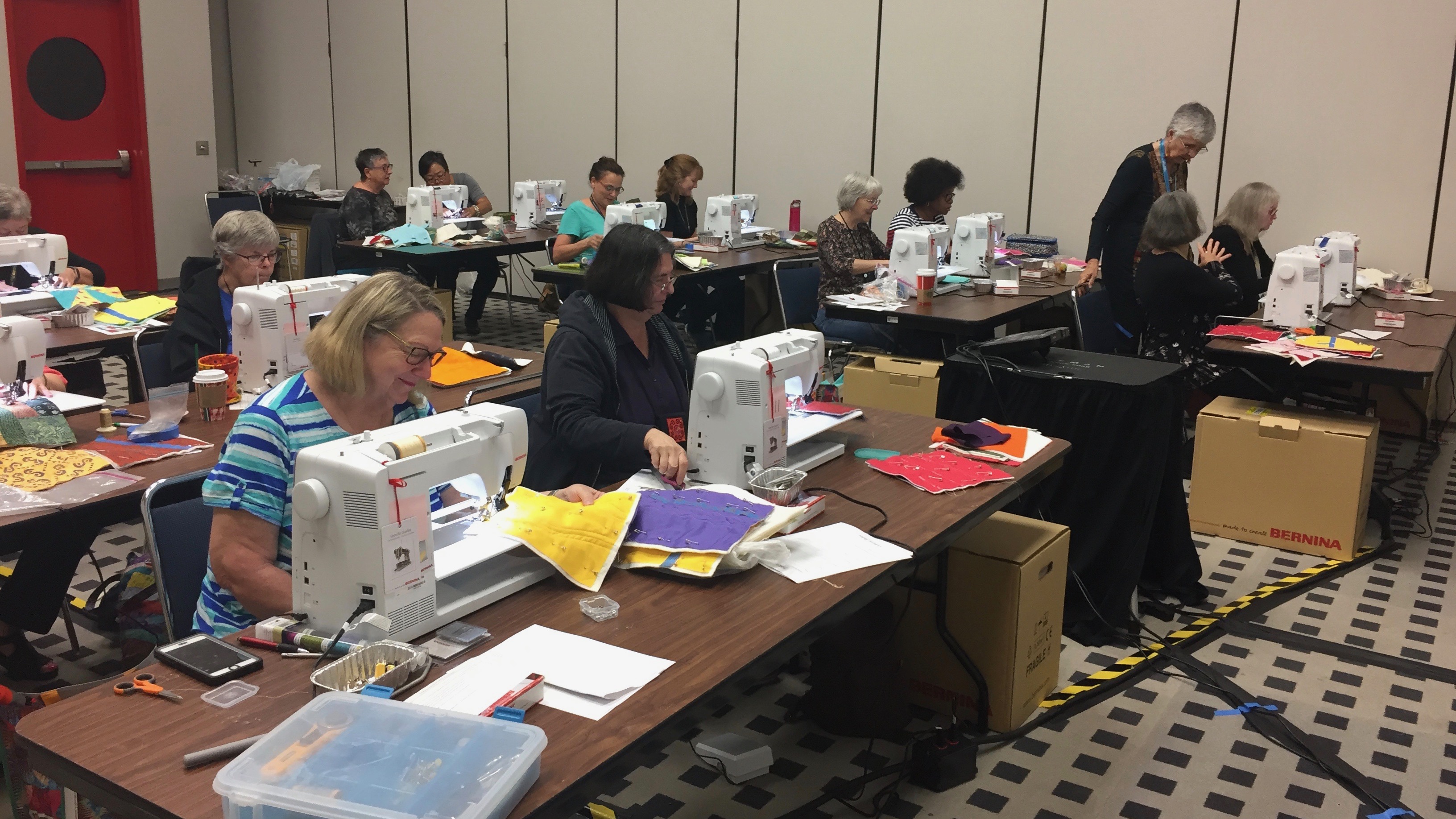 Walking Foot Quilting in three hours makes for a fast paced class. We made sure to include organic curves! 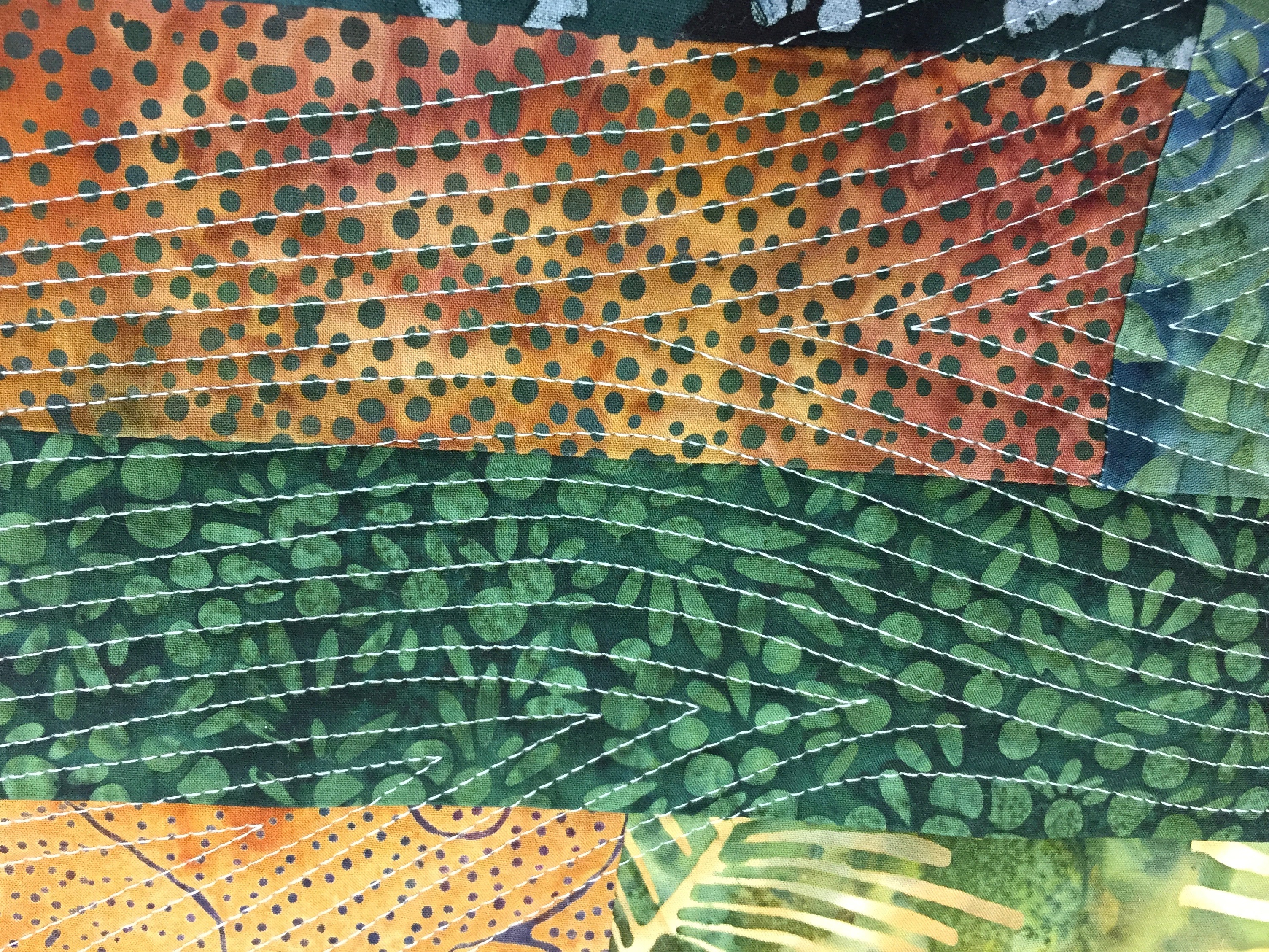 I had a few hours to breathe before my first lecture. I was booked for A Trip Around the World the last hour before the show opened for preview night. Here are some of the crowd waiting while I was still getting set up. 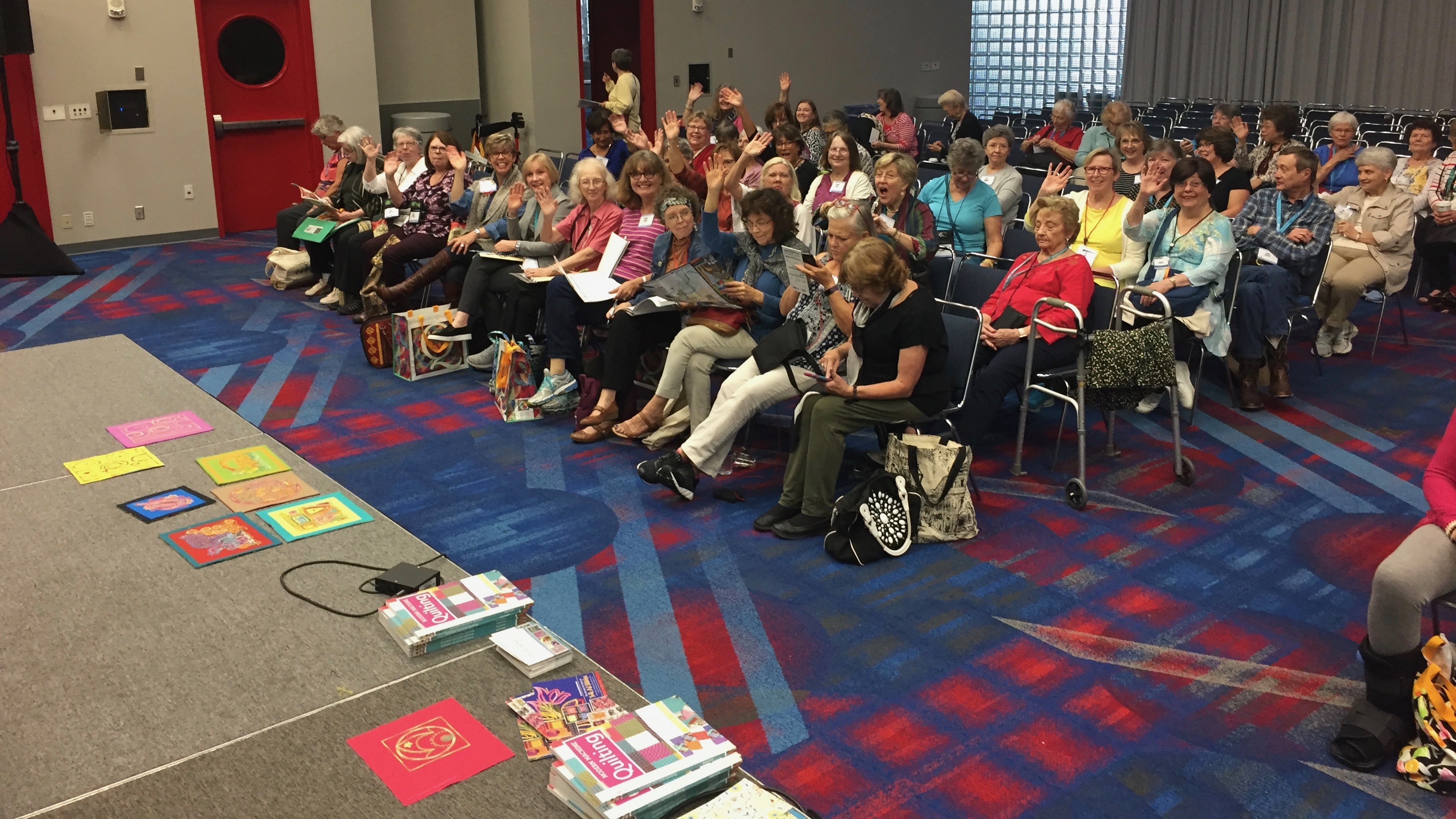 I think this is the only picture I have with Sheila in it. She managed to find a spot on the front row just for the photo! 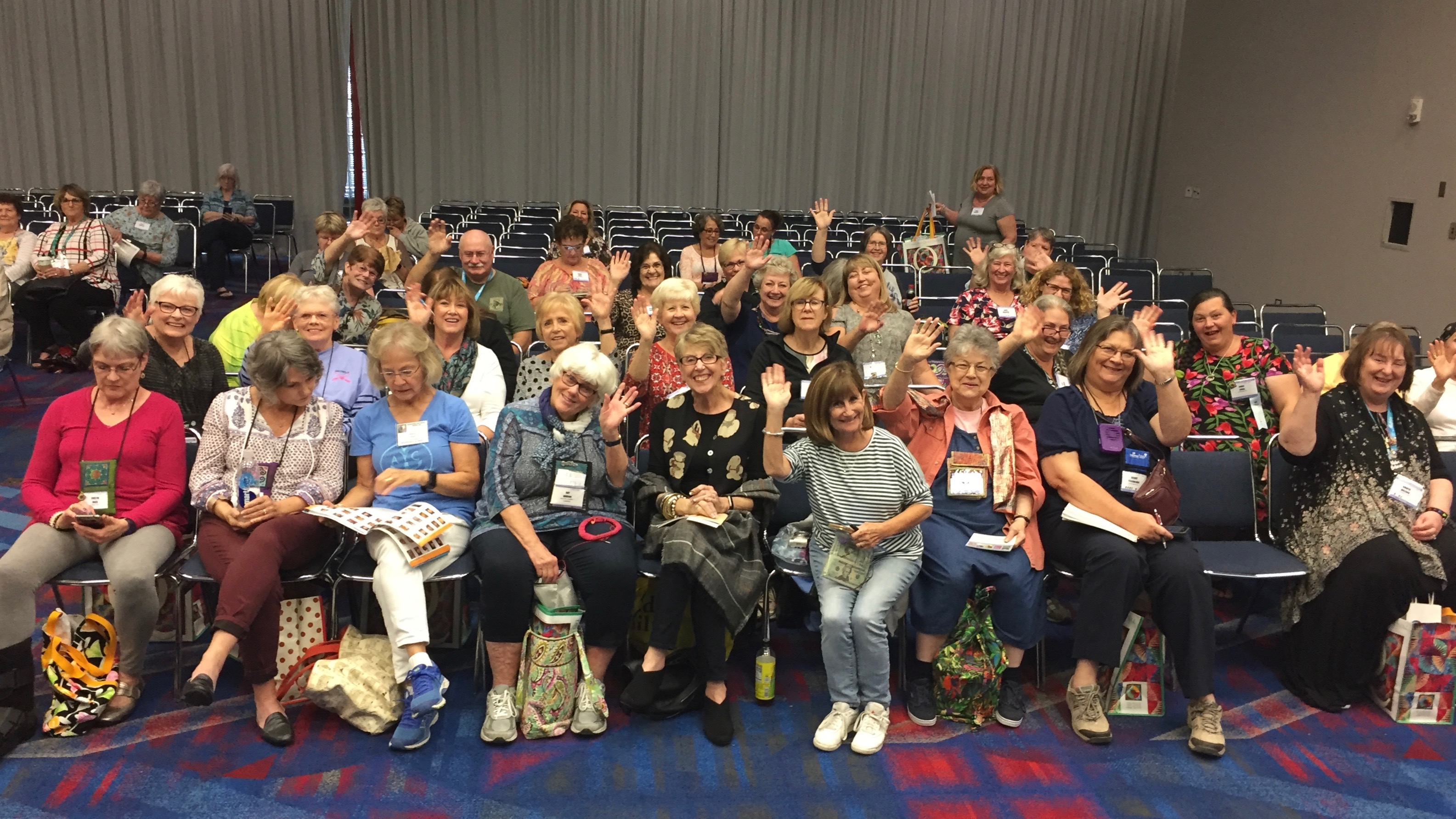 I had about two and a half hours on the show floor and managed to get up and down all the vendor aisles. My purchases fitted in one plastic bag. I think that was good thing 🙂

Thursday morning was the Machine Quilting Forum with six teachers and a couple of hundred of our closest friends. 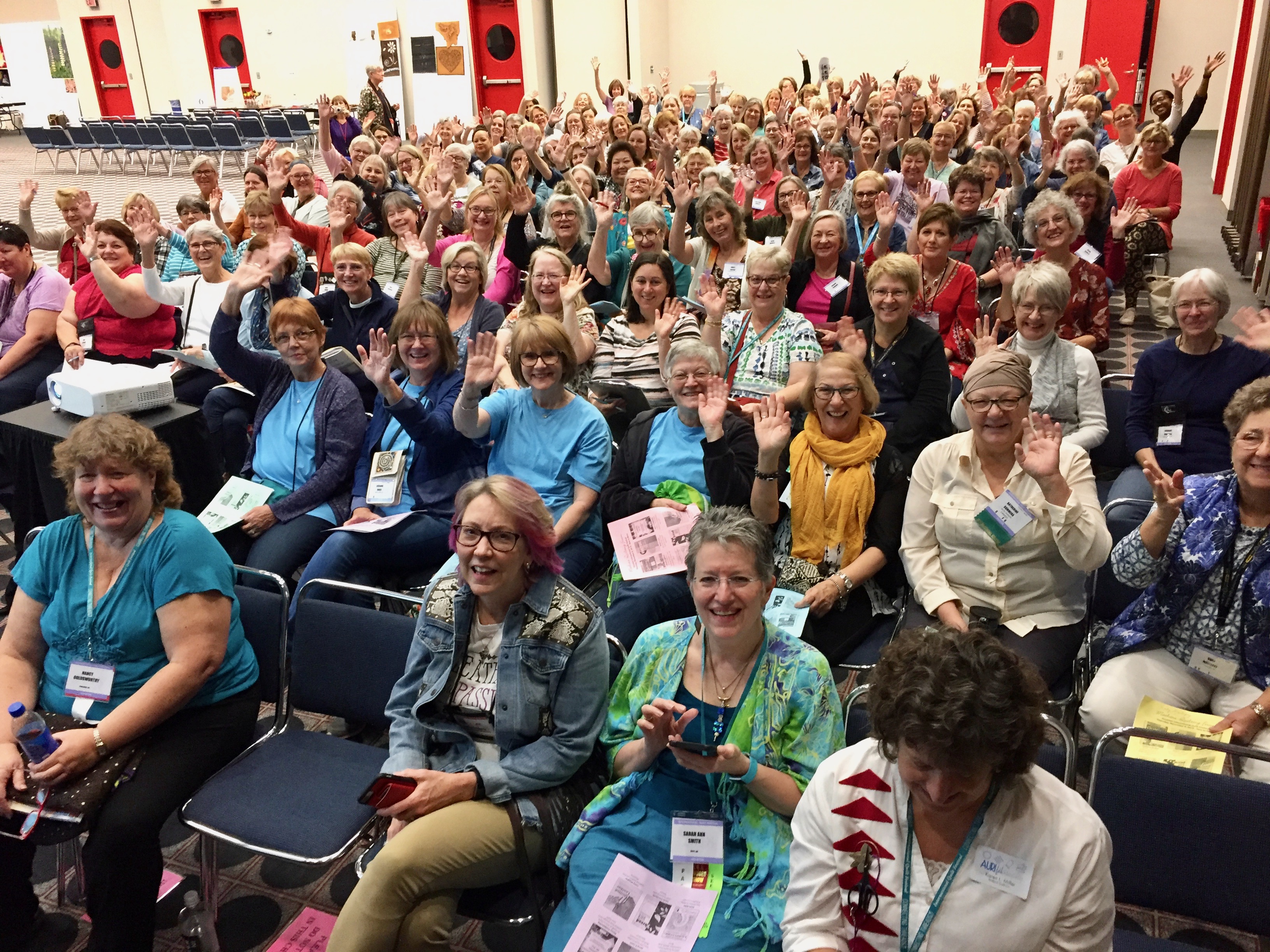 Two hours of embroidery in Open Studios filled the afternoon.

We had the Friday Sampler early the next morning.

My friend Anna Buzzalino was looking ready to go with some Paintsticks in the next booth to mine. 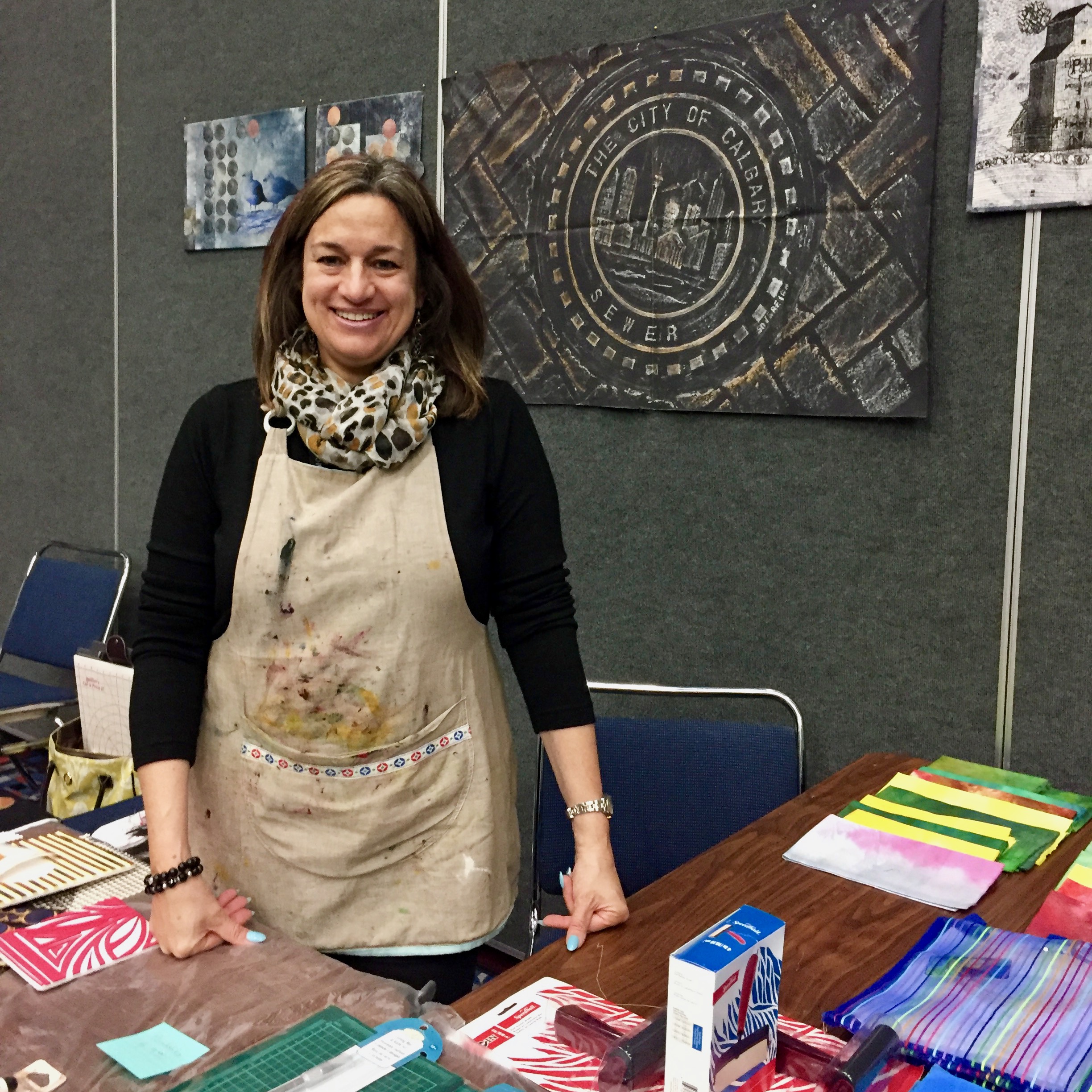 I was all ready to talk about Dorset Buttons. 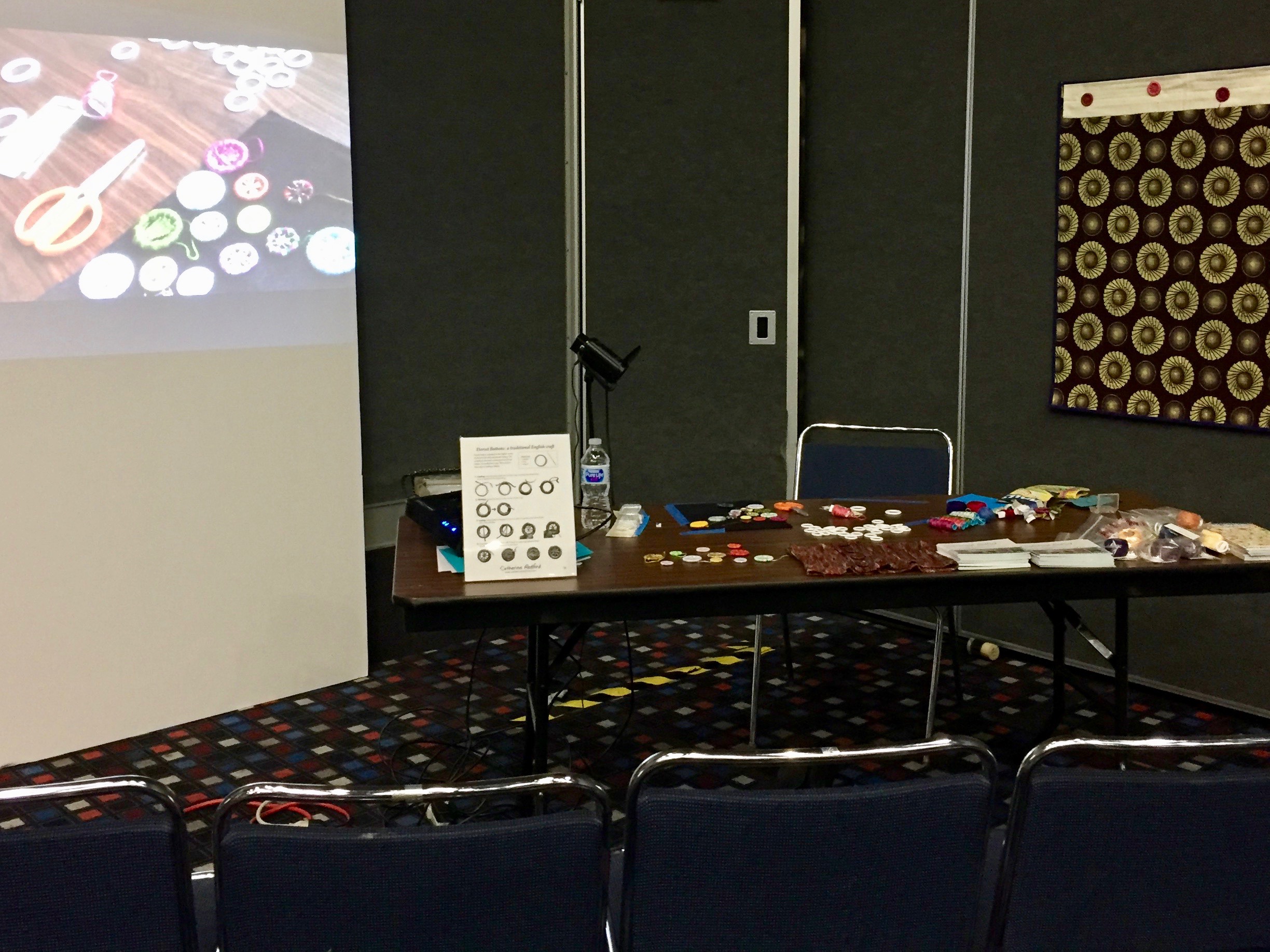 The camera and projector worked well to let people get a good close up view. 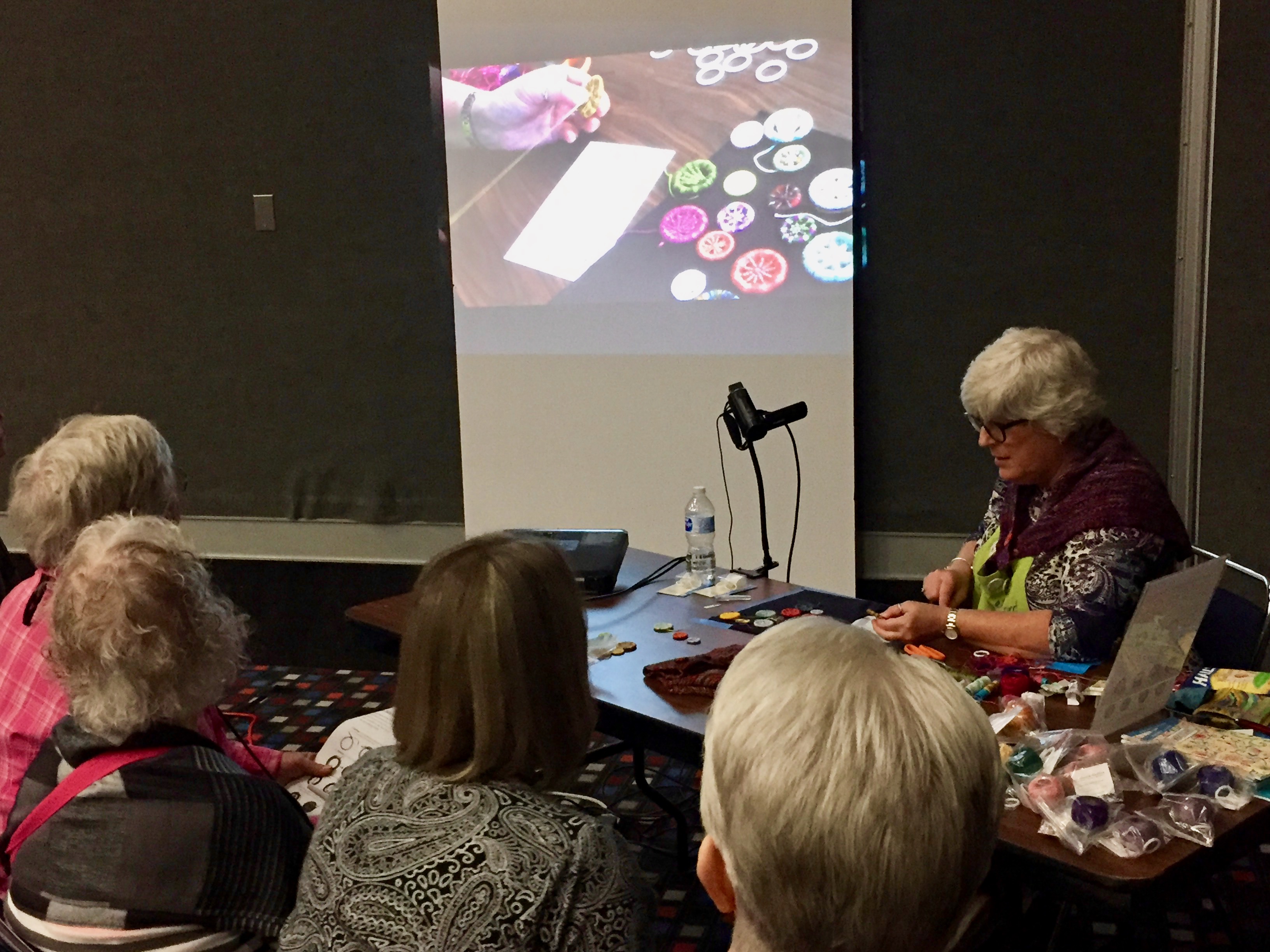 We had some little kits for sale so I’m hoping there might be some brand new buttoneers out there?

I gave my first Meet the Teacher lecture on Friday afternoon. I had no idea what to expect but apparently there were a fair number of people wanting to meet me! 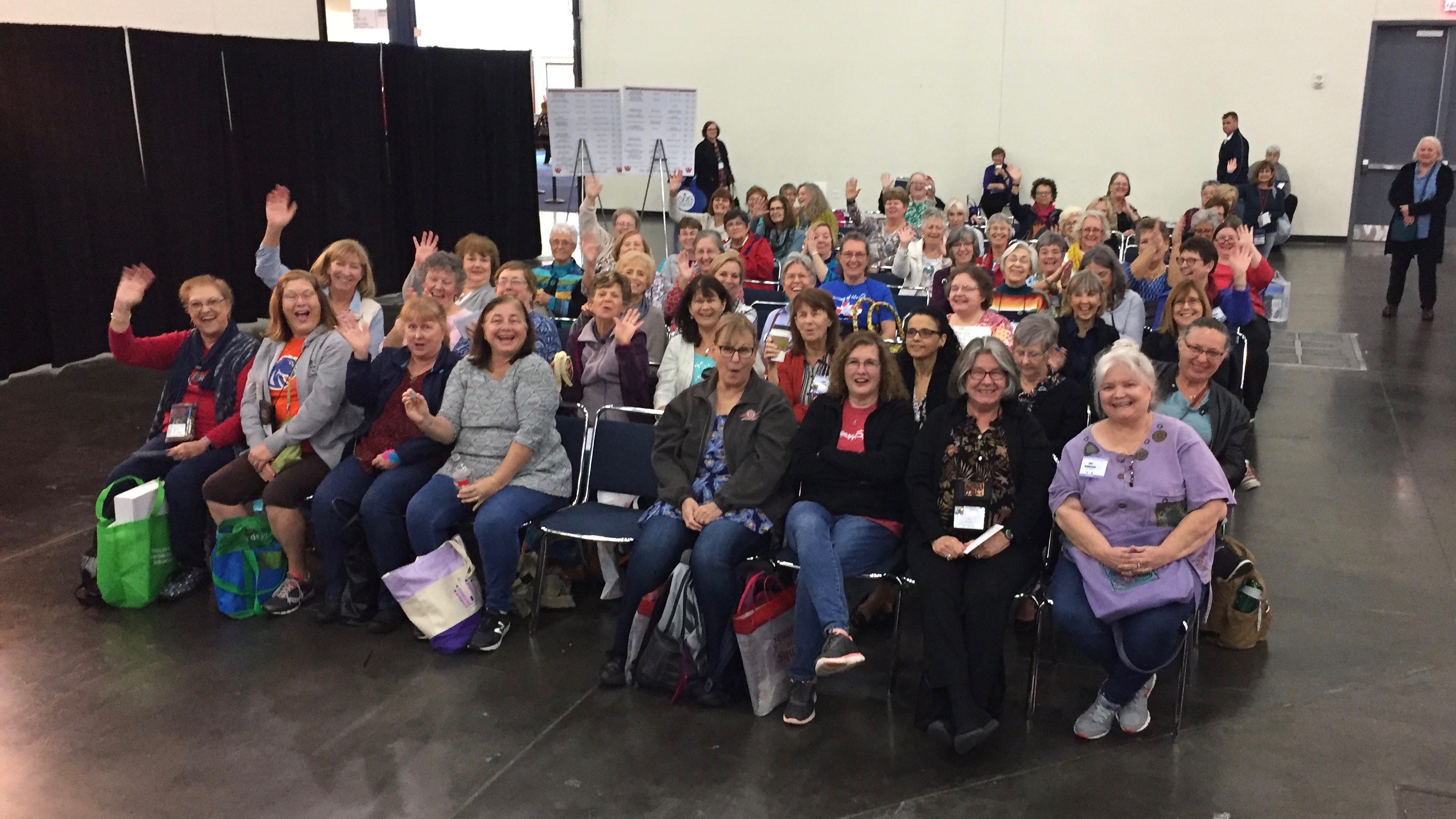 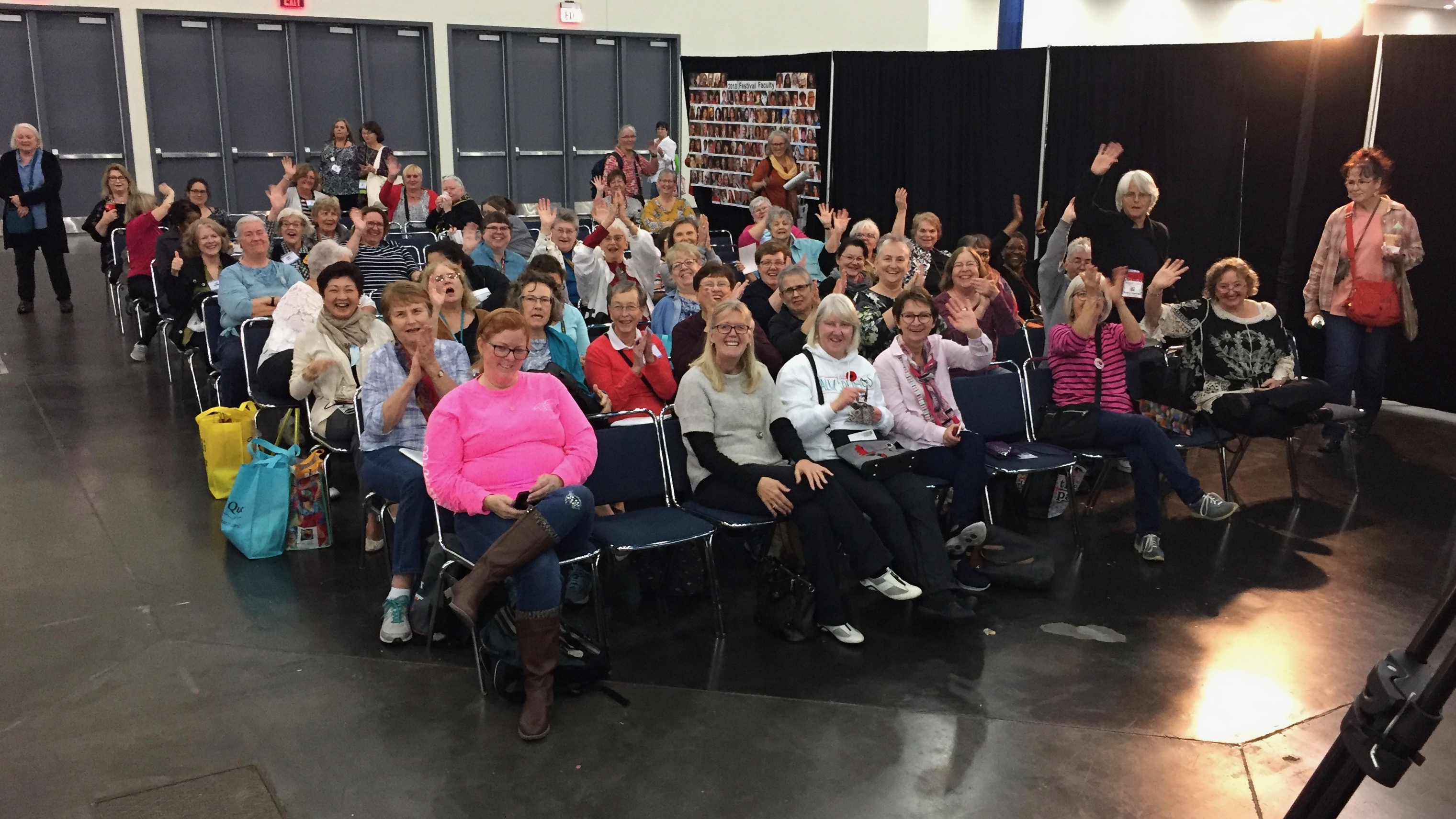 Just twenty minutes to present just the very basics of what you might want to know about Walking Foot Quilting!

Can you believe we are up to Saturday morning already?

I was awake when the sun came up behind the east wing of the hotel, 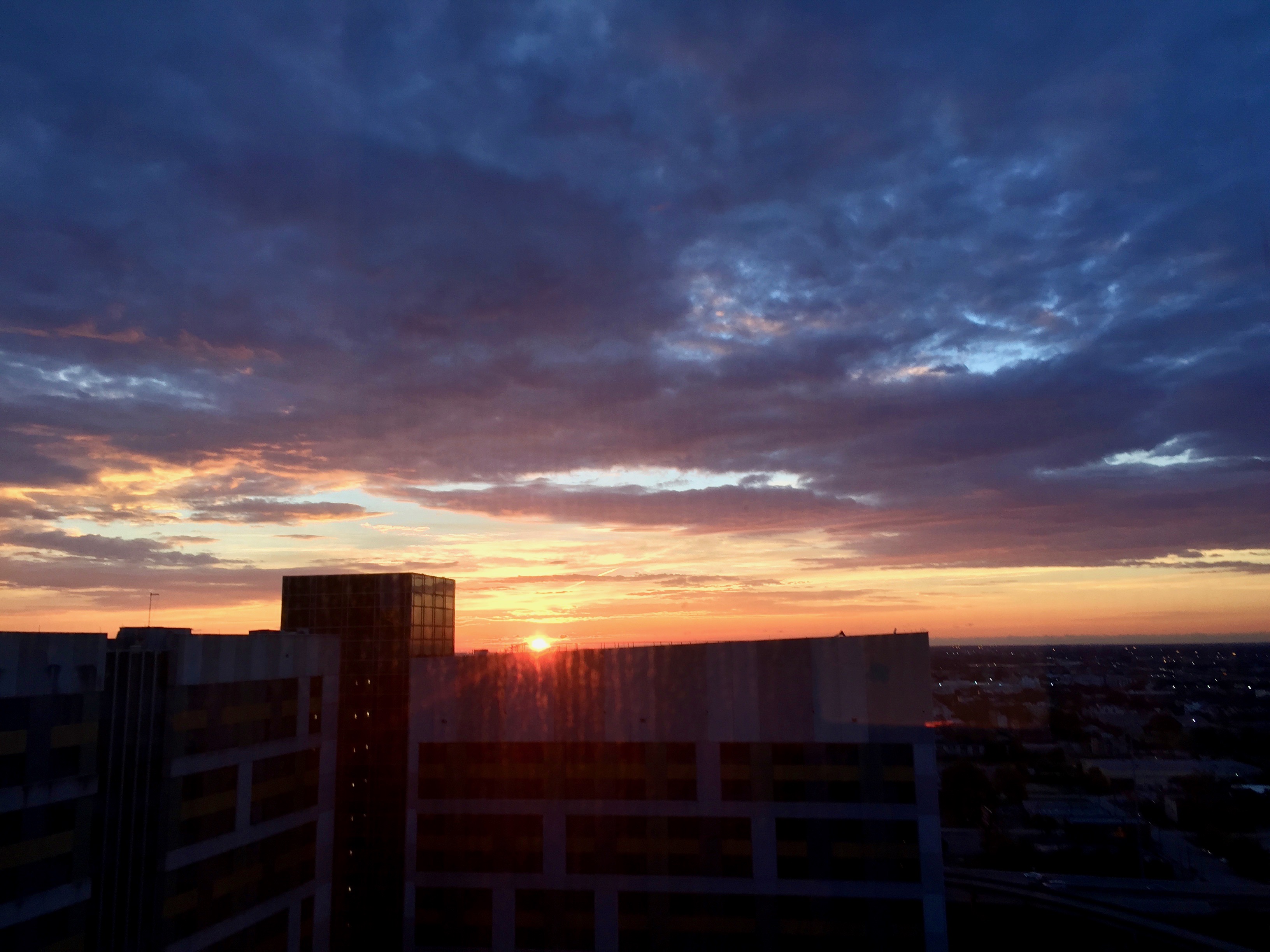 and then we were over in the BERNINA class room for another three hours with the Walking Foot.

Some people were having altogether too much of a good time? 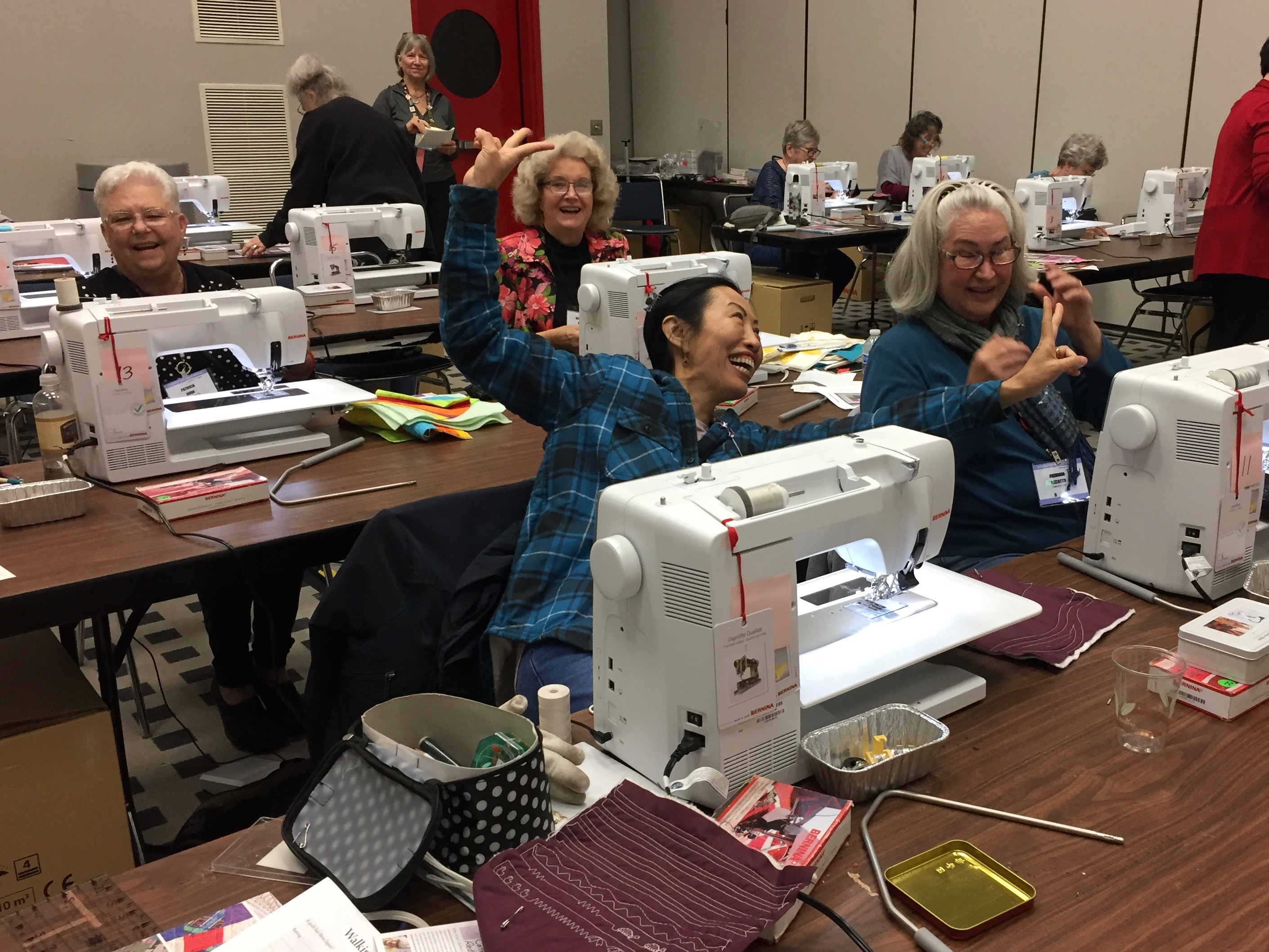 These two sisters sat at the front and worked well together. 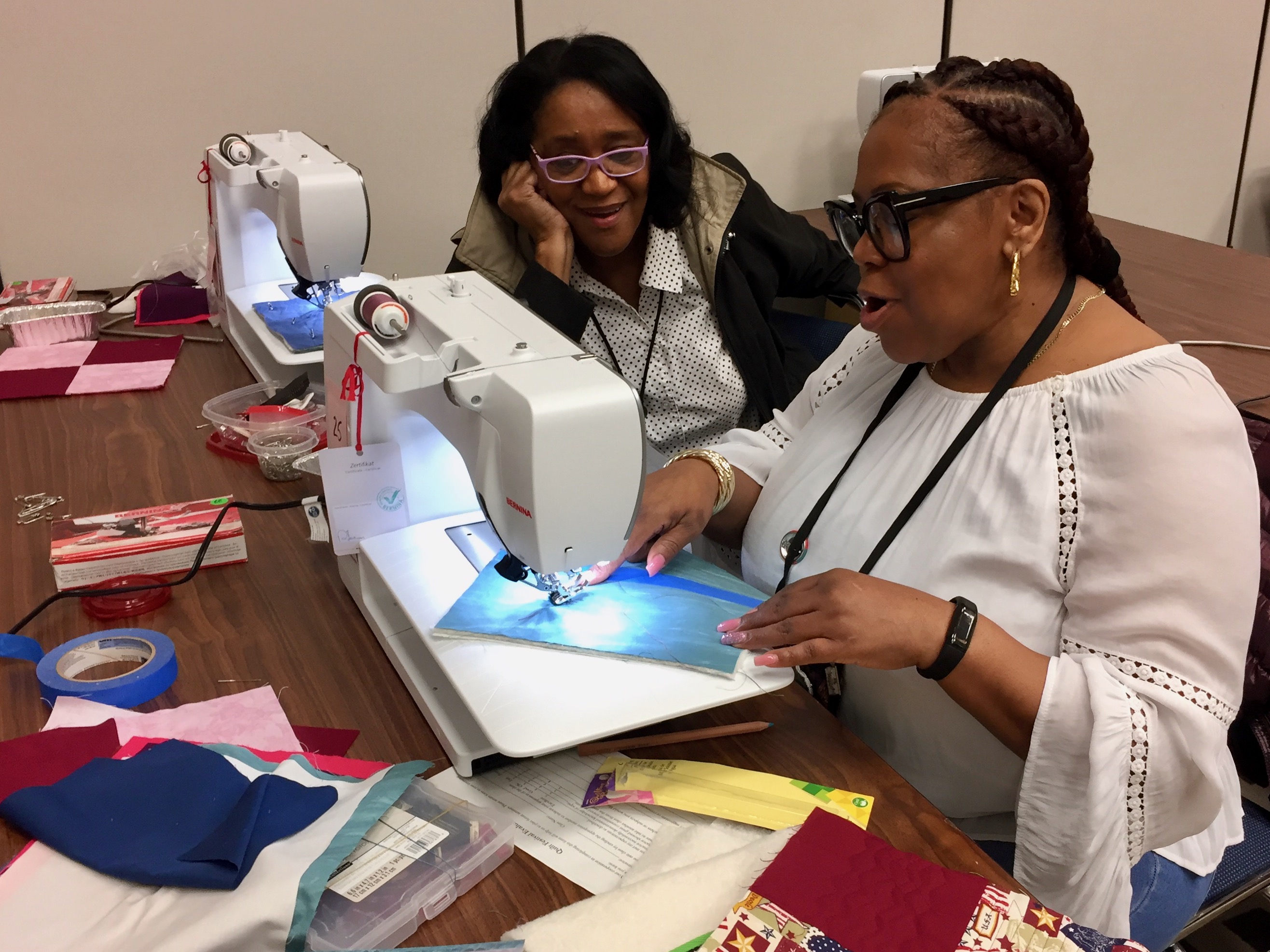 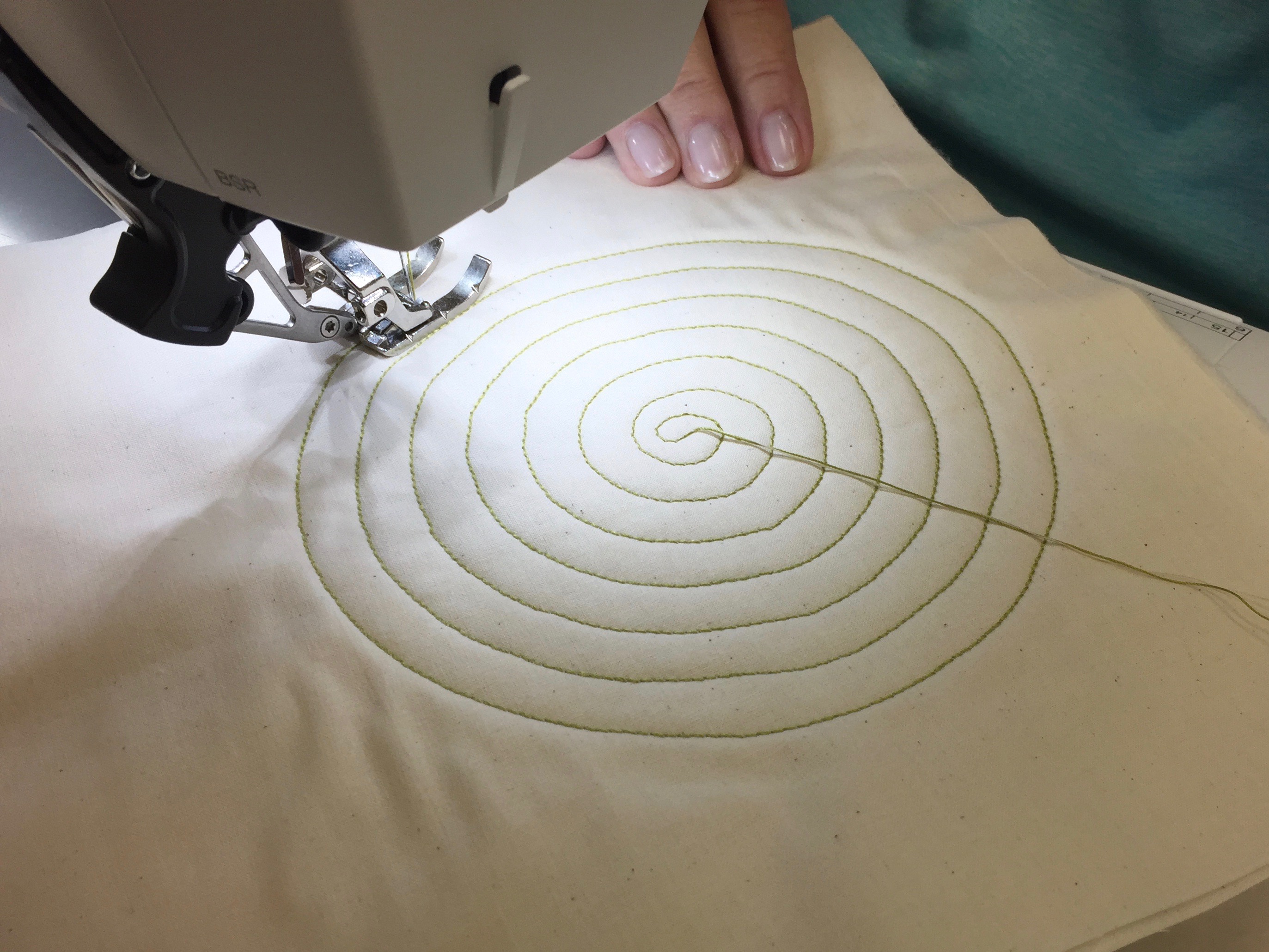 That was it for classes but no time to stop.

I had a Language of Flowers lecture at 2.30. There was a smaller audience for this one so I tried to get everyone to sit closer together. 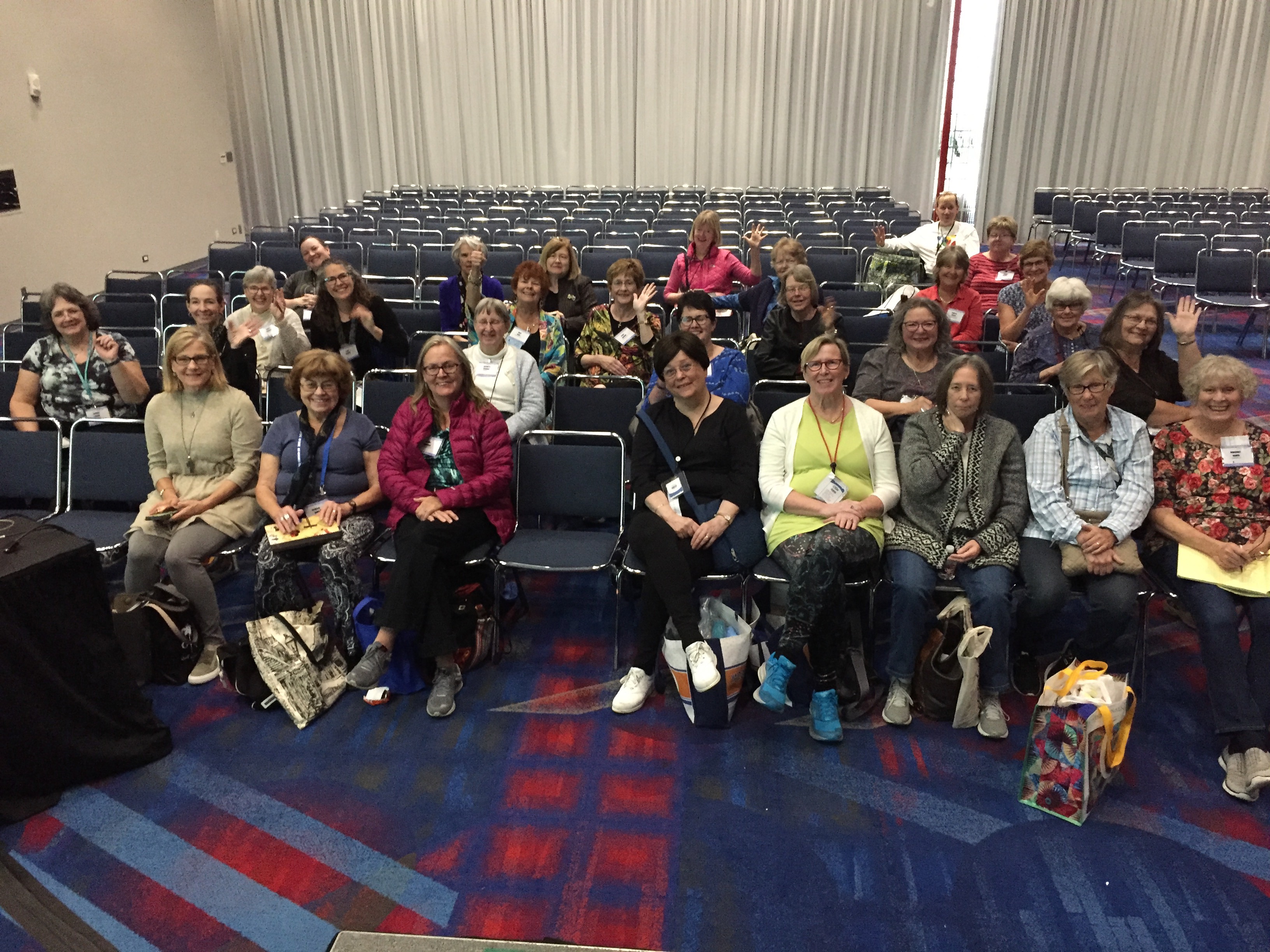 That was followed by a very busy two hours in Open Studios with a sewing machine. We sold my last few books (that was 81 total for the show) and I was done for Saturday!

Just Sunday left. Four hours making Dorset buttons in Open Studios and my second Meet the Teacher lecture. I really didn’t expect anyone to come and meet me at 2.30 on Sunday afternoon but there were a few. 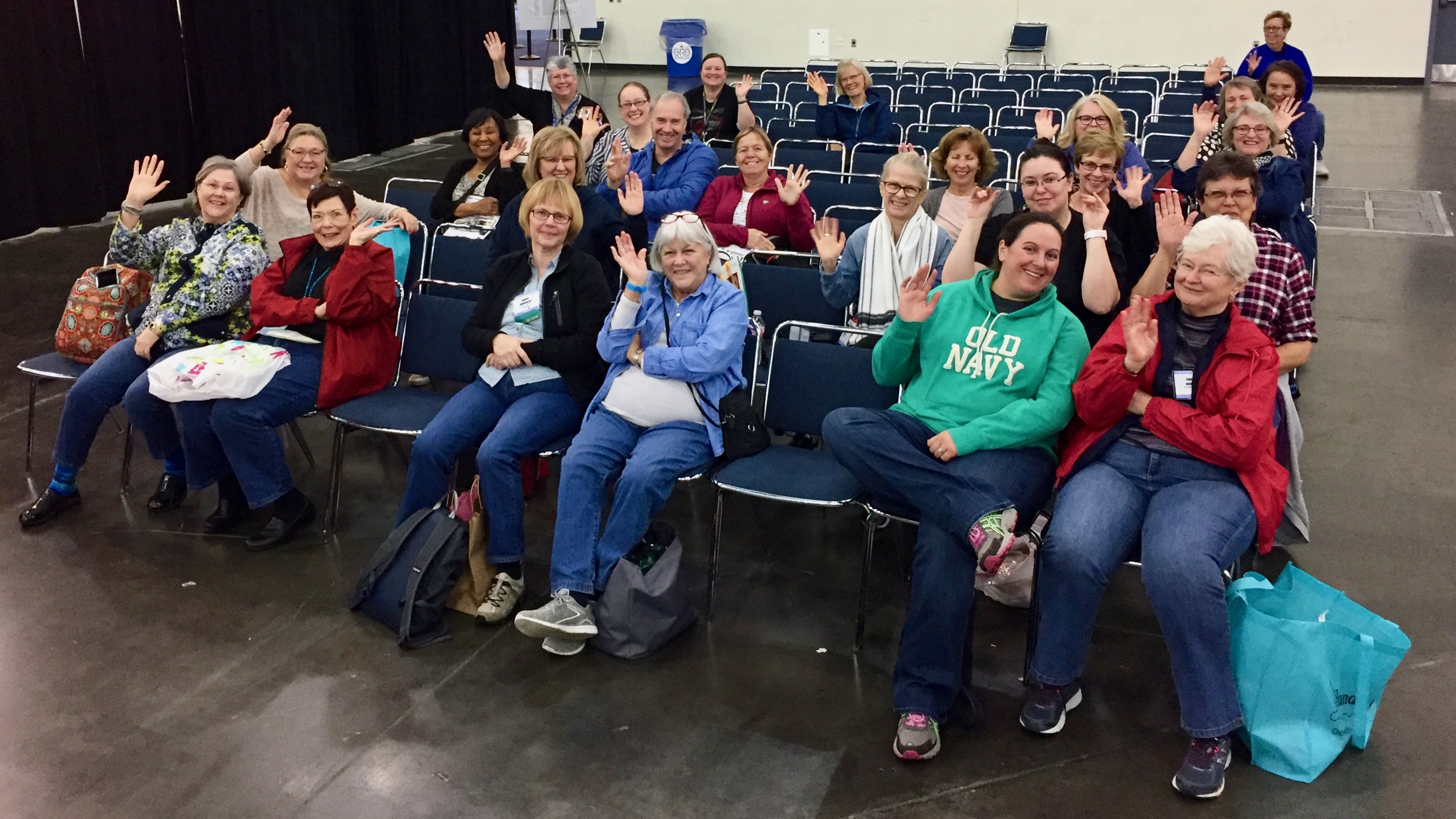 Perhaps their feet were tired or they were all spent up? 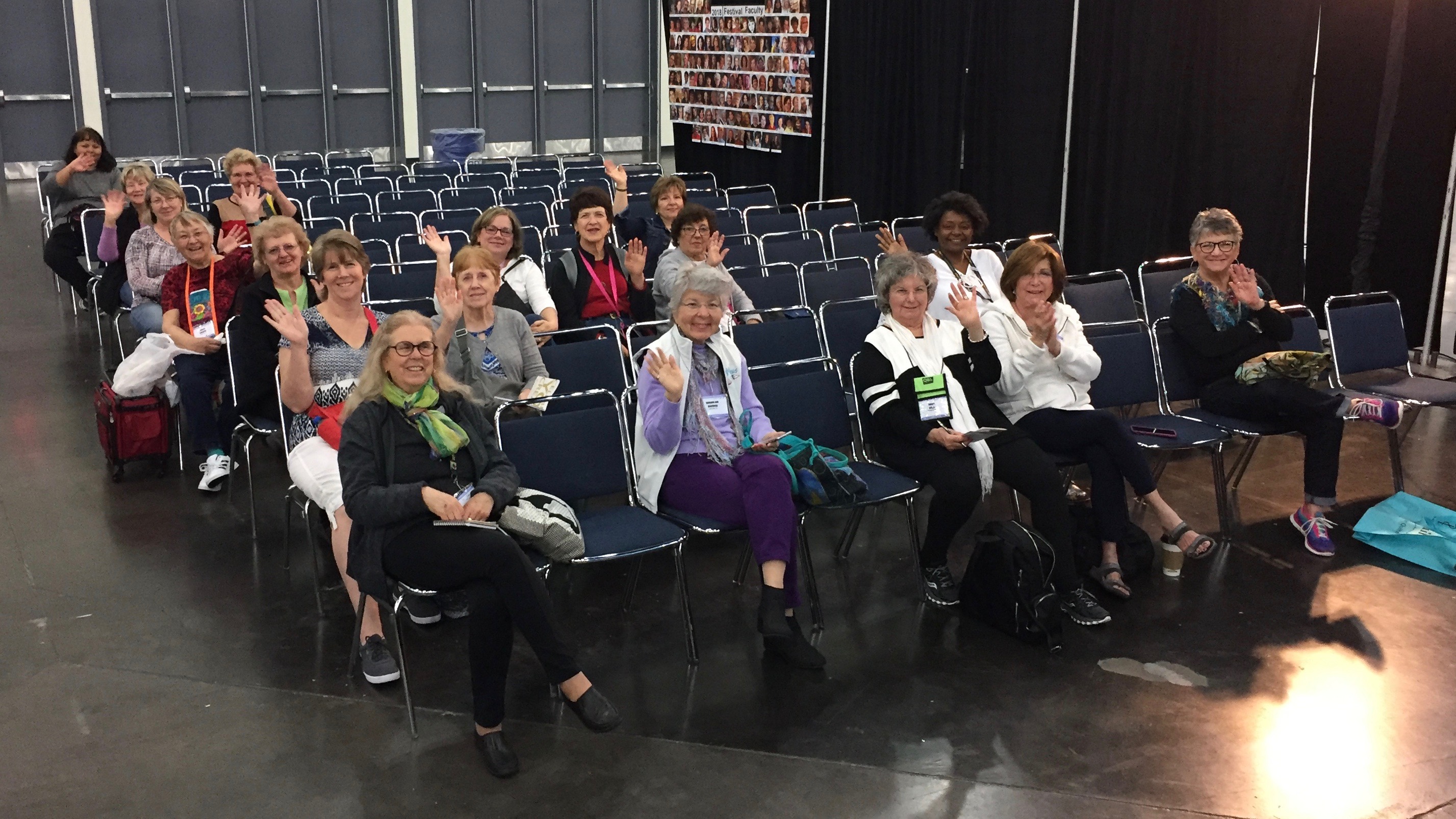 Just an hour until the show closed for2018. I had a few people to bid farewell to and then it was back to my room to get my bags packed.

Everything fitted in well. There was space for all my purchases, thanks to all the kits being gone and the good shopping done by students in my classes!

My flight back to Midway on Monday was uneventful which is just how you’d want it to be. Steve arrived as my luggage appeared on the carousel and off we went, homeward bound.

I really did have a wonderful time in Houston this year. Maybe I would have liked to spend a little more time socializing but I go to work and I certainly did that… I have signed a letter of intent for next year so I know I’ll be back in 2019. I’ll be writing my proposals very soon. Ideas welcome 🙂