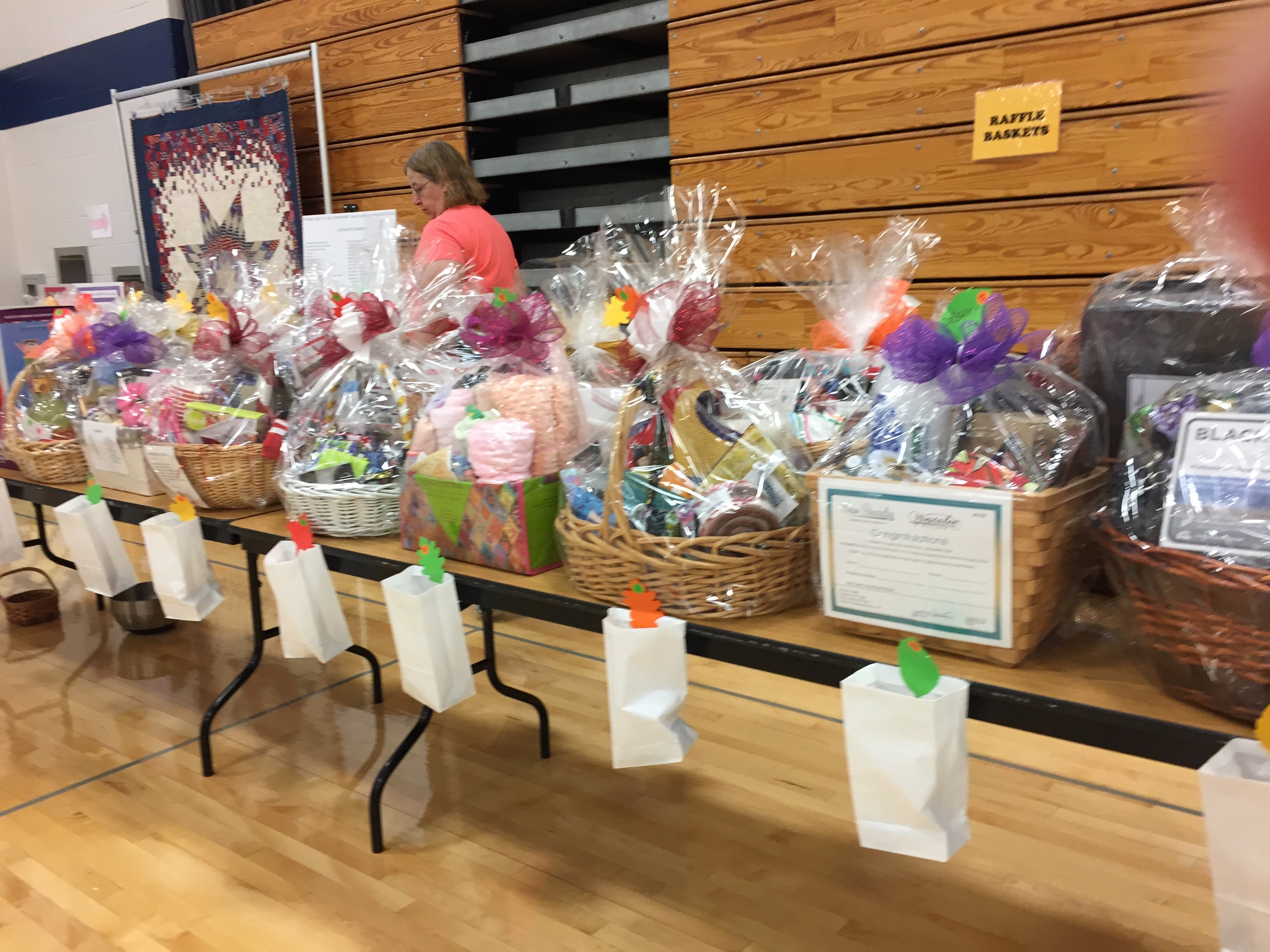 An instagram post from Second City Quilts on Friday night alerted me to a show happening in New Lenox at the weekend… I have to admit to not getting out very much when I’m home but I wanted to go say hi to Becky and it’s always fun to go look at quilts!

Steve was playing keys at our church’s Lemont campus on Sunday morning so I joined him there for the 9.30 service and then headed a few more miles south to the Heritage Quilter’s show at Liberty Junior High School.

After paying to get in, the guild’s beautiful raffle quilt was hanging in the hall. Designed by Gail Stepanek, pieced by guild members and quilted by Jan Hutchison, it would have looked good on my bed? 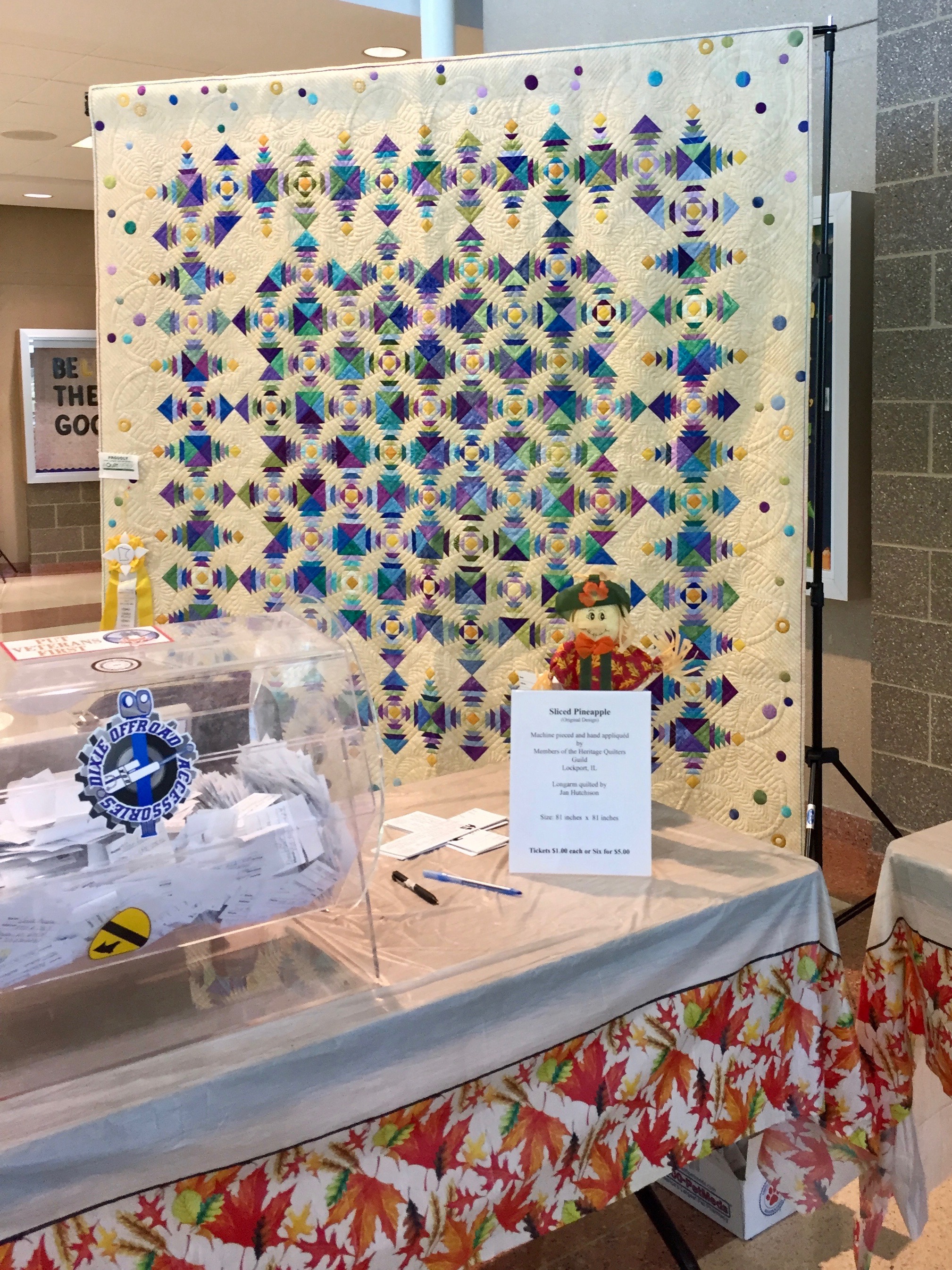 I bought some tickets but didn’t get a phone call… 🙁 I’m sure the winner was delighted.

The vendors were in the next space so I stopped in to have a look around and found Becky in her booth. 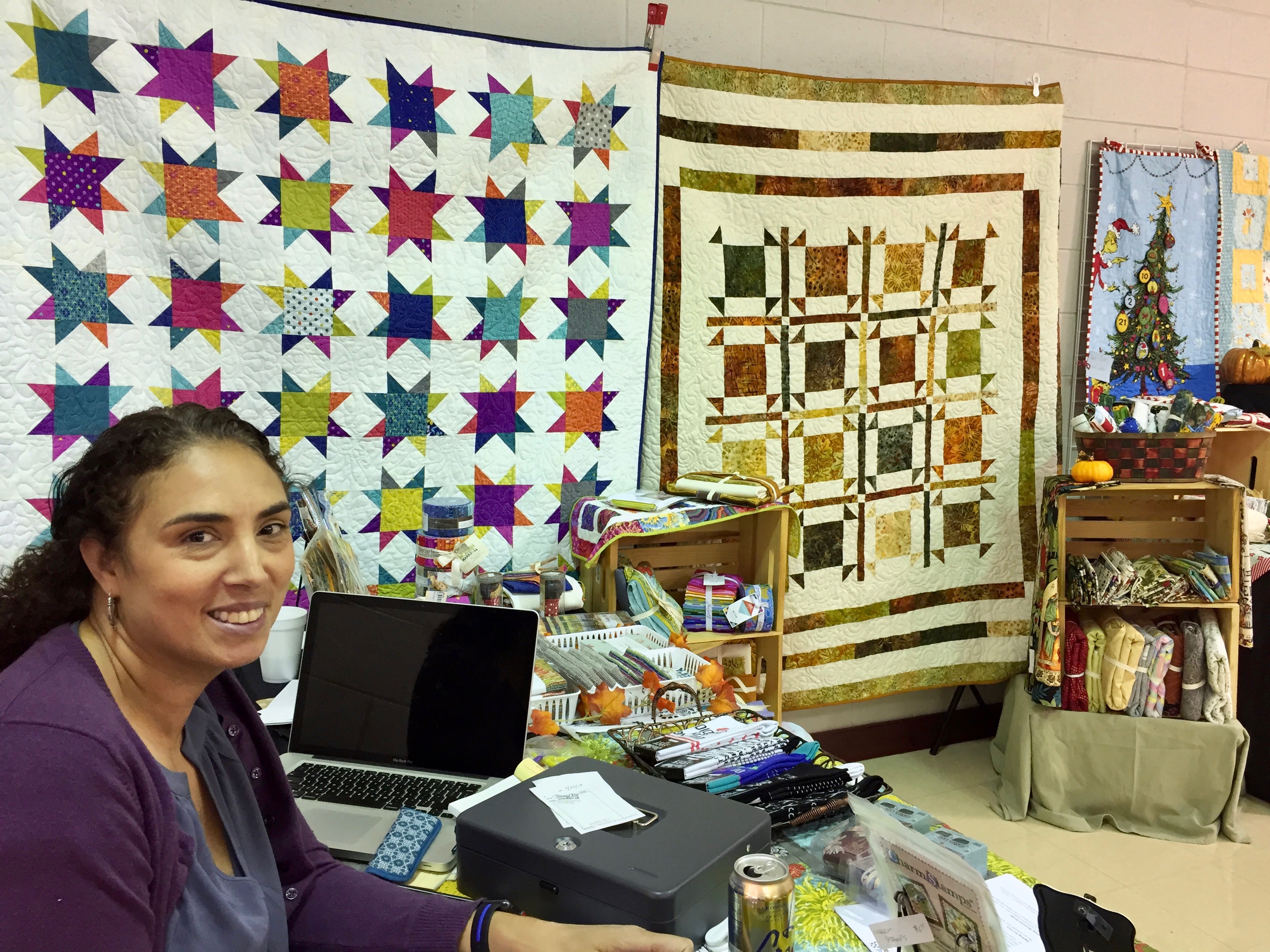 I’m hoping we might be able to arrange a class in the city sometime in January? She’s promised me a parking space.

Next up the raffle baskets, all fifty of them, filled with all sorts of goodies. 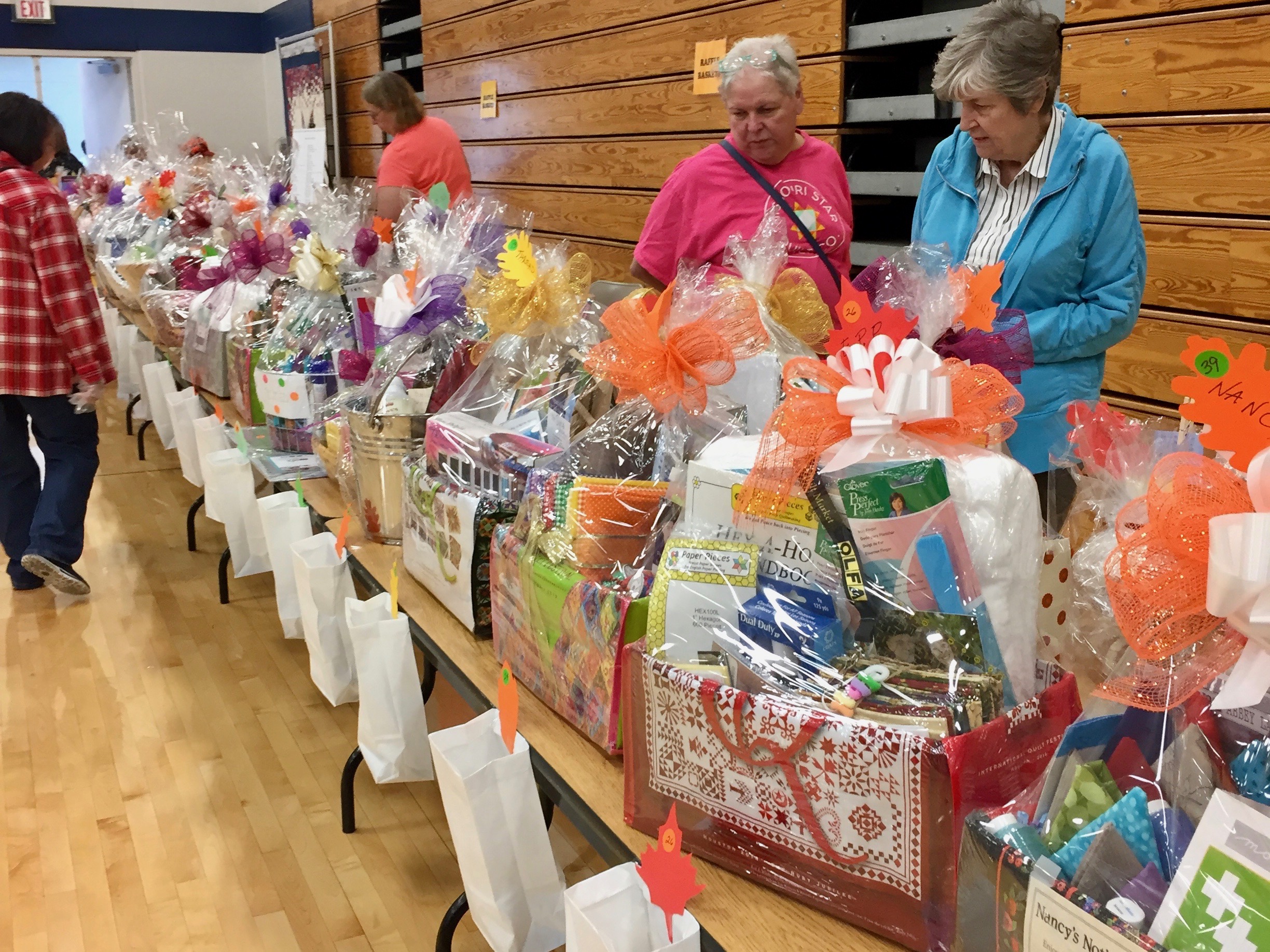 I bought my tickets and put them in the bags, but no, I didn’t win any of those either!

Time for some quilts?

I just took a few pictures of ones that caught my eye.

Bonnie Hunter was a popular visitor to the guild and there was a super version of On Ringo Lake, pieced by Dolores Kettman and quilted by Tracey Clark. Note the ribbon! 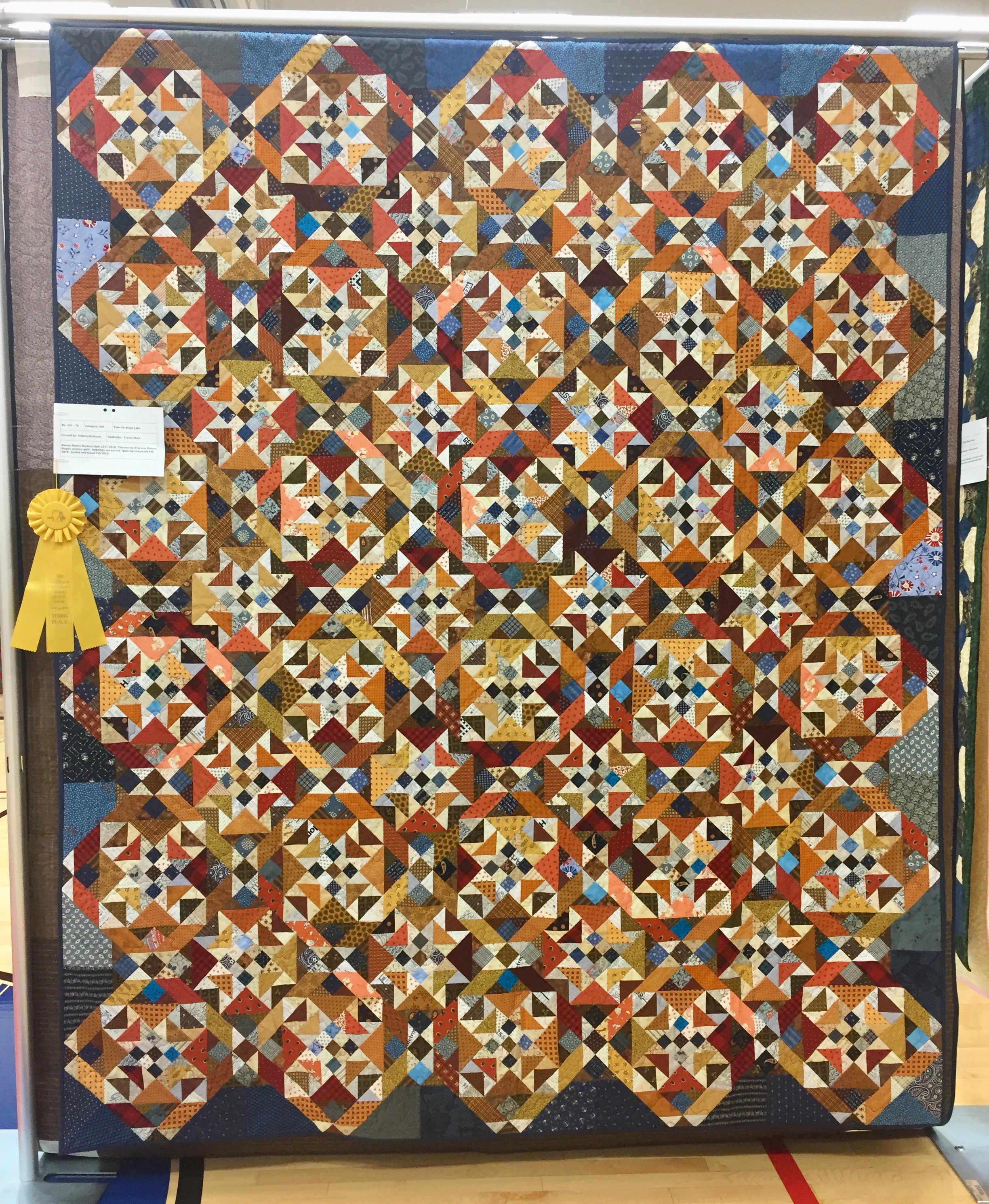 This is Transparency, pieced and quilted by Mary Mandersach, a blue ribbon winner. 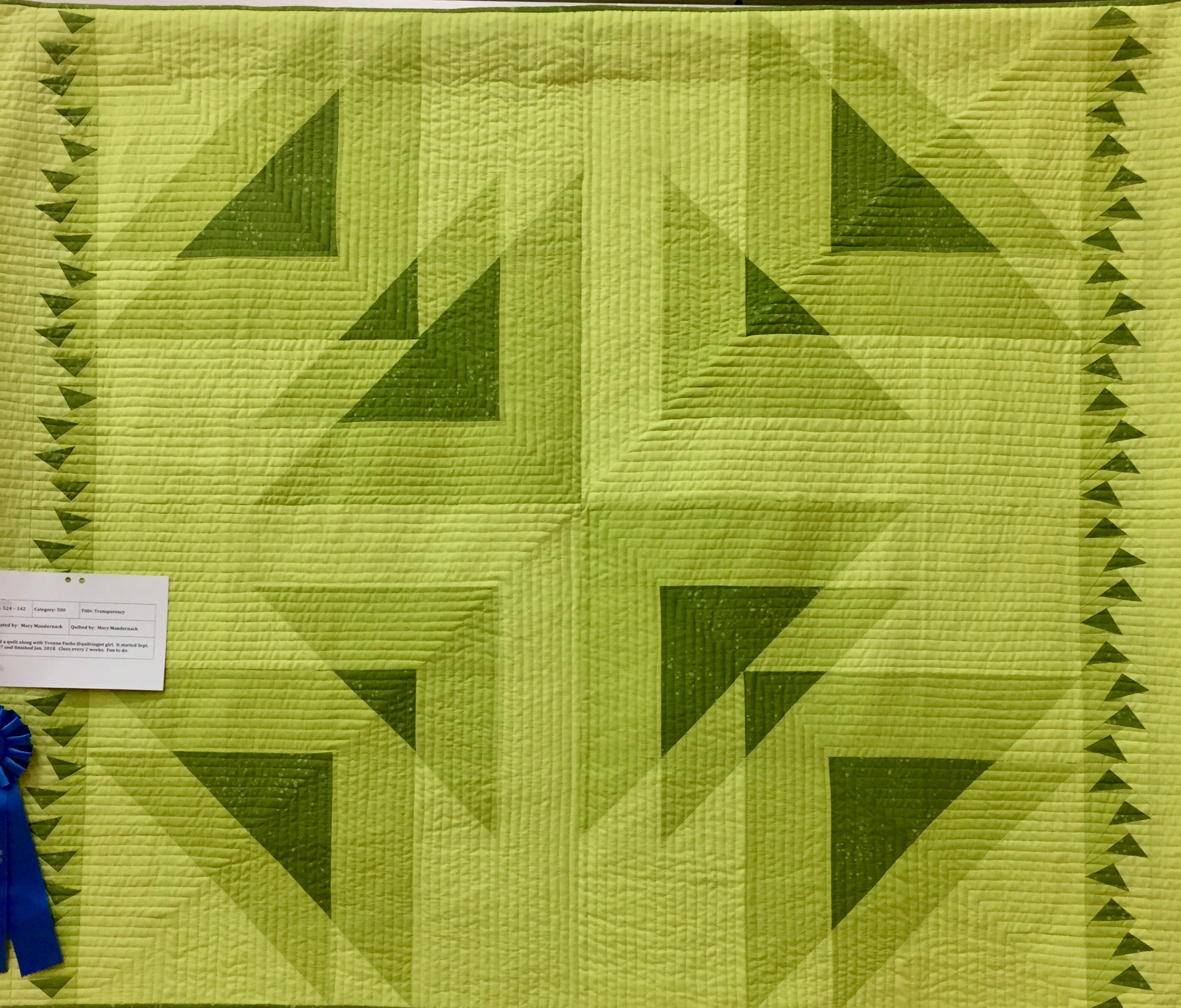 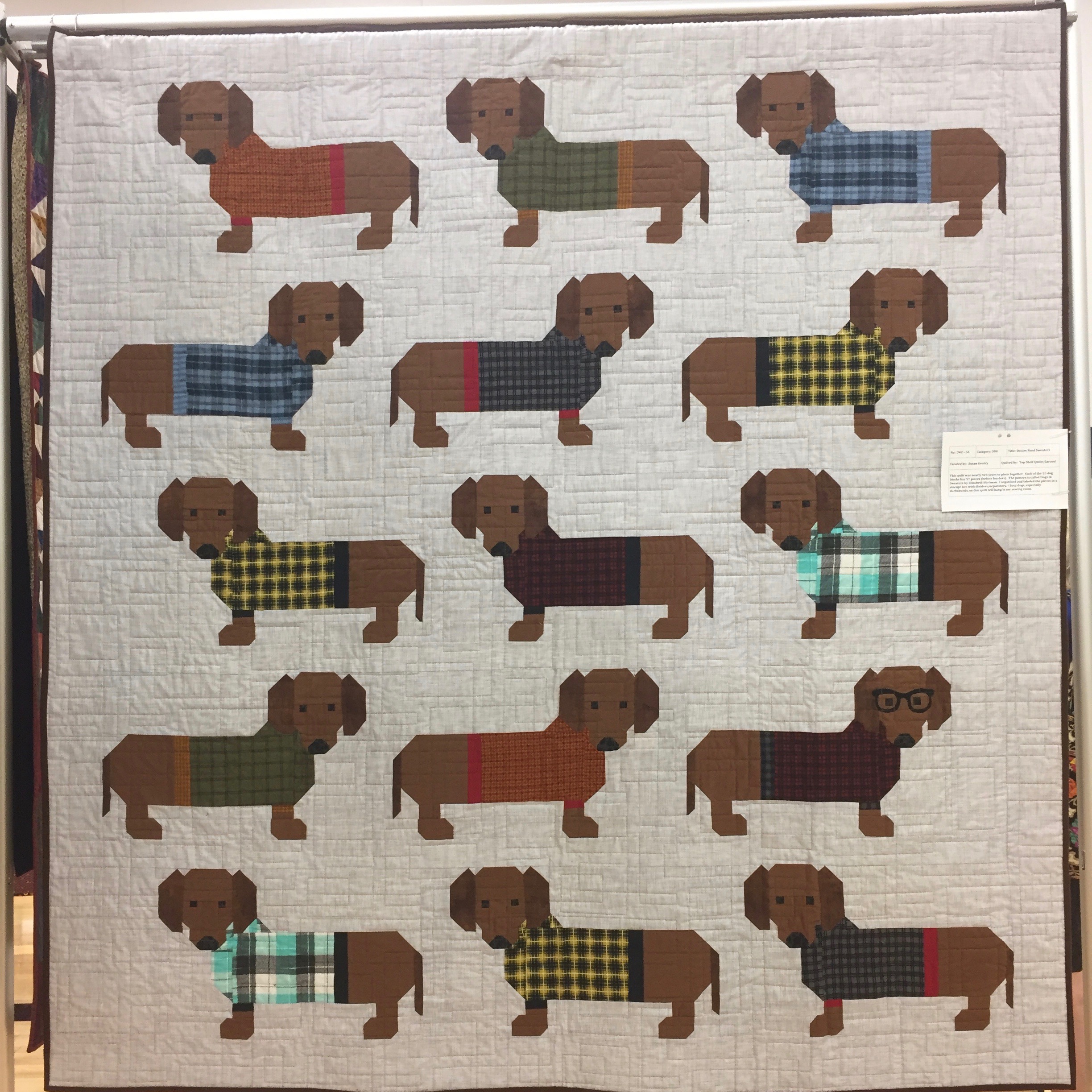 The mayor had a ribbon to award to his favorite quilt. It went to the more traditional The Long Way Home made by Sandy Johnson using the pattern Around the Block and quilted by Dan Kolbe. 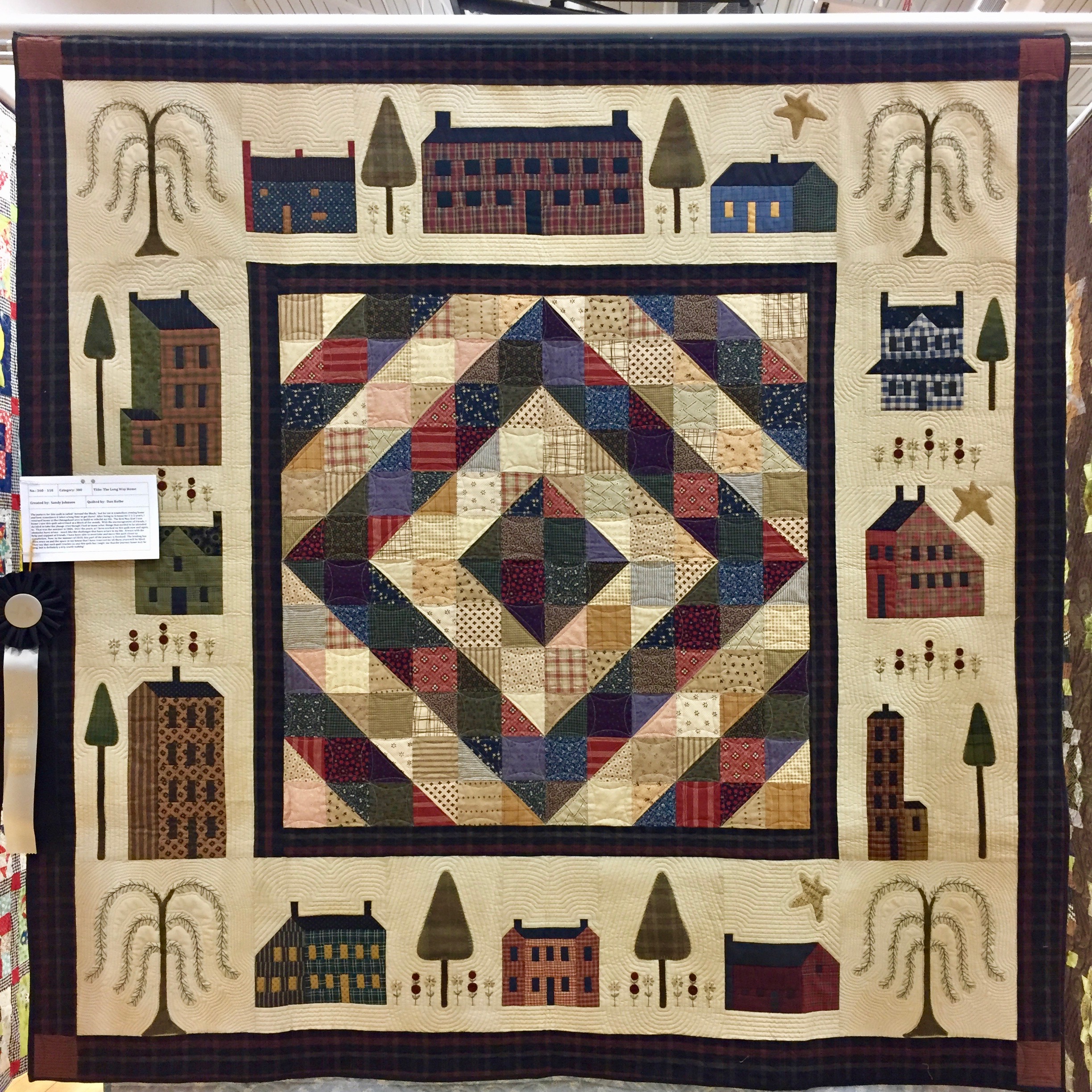 Gail Stepanek is a member of the guild and she had a couple of quilts on display.

This one is Cache of Carats, pieced by Gail and quilted by Jan Hutchison. It has won prizes whenever it has been in national shows. Gail hadn’t entered it for judging at this show! 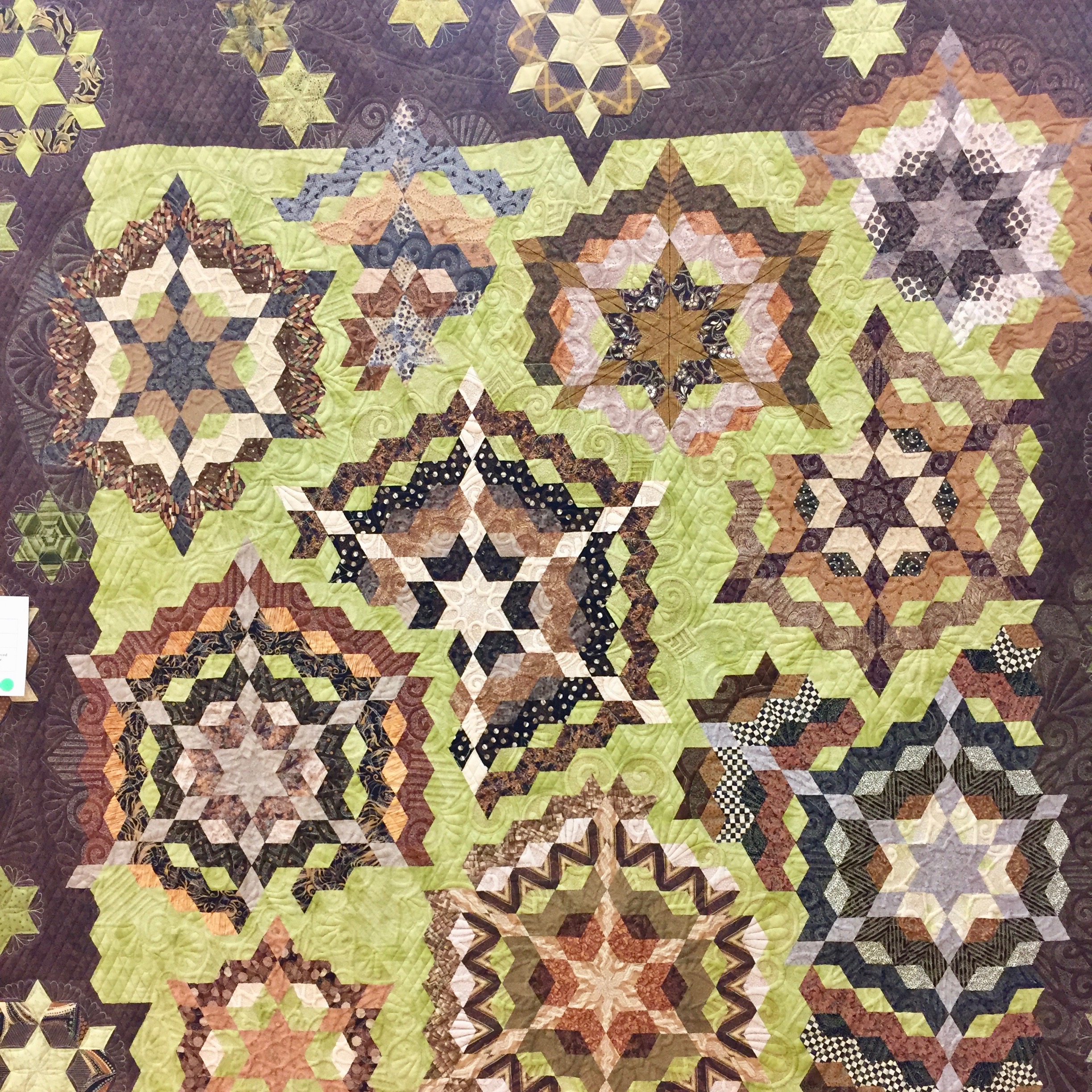 and a closer look at the amazing quilting. 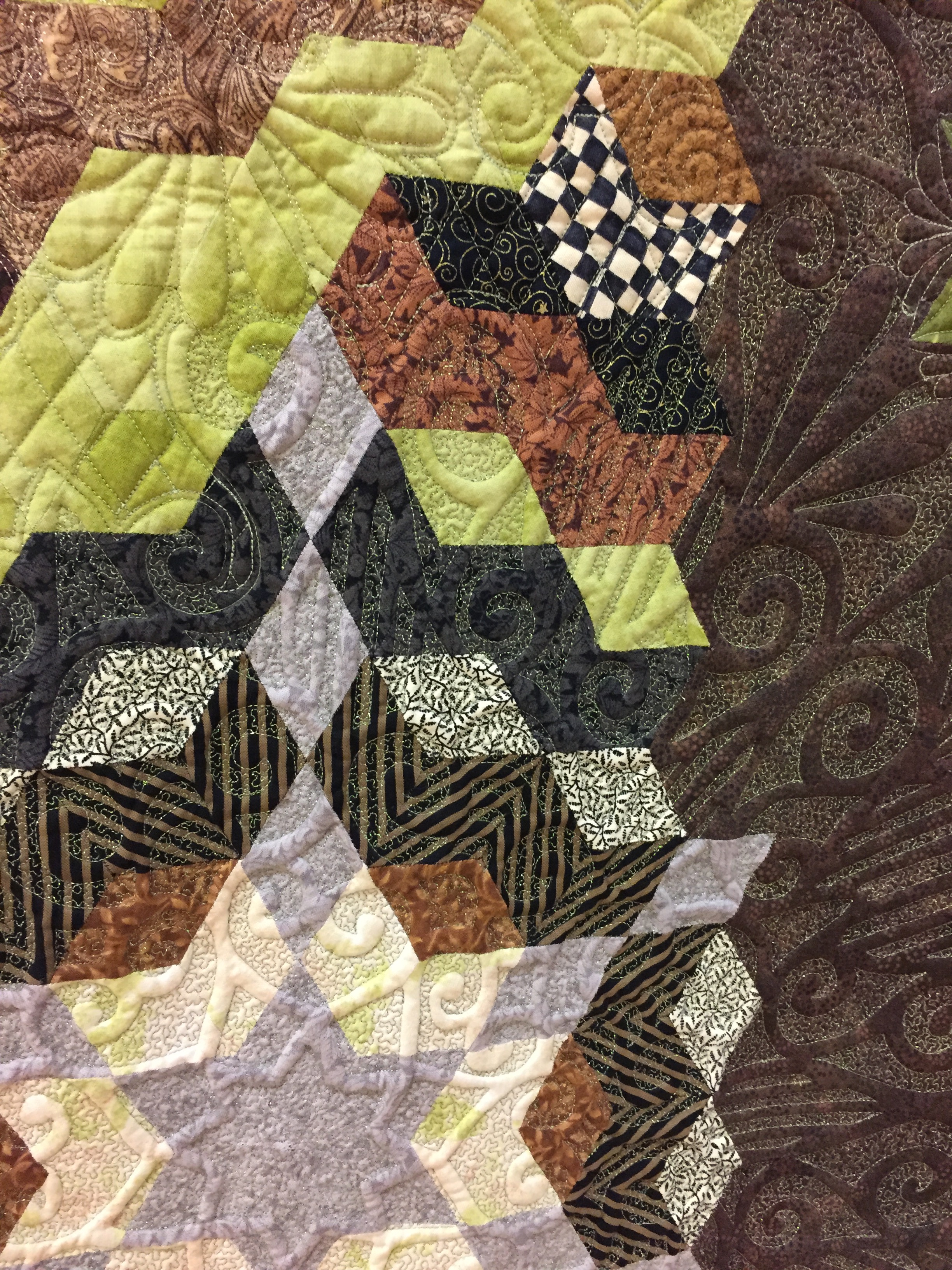 There were smaller quilts too.

This is Harley We Barely Got to Know You, made by Barbara Wrobel, started in a workshop she had with Barbara Yates Beasley.  Aren’t the eyes fantastic? Definitely deserving of a blue ribbon. 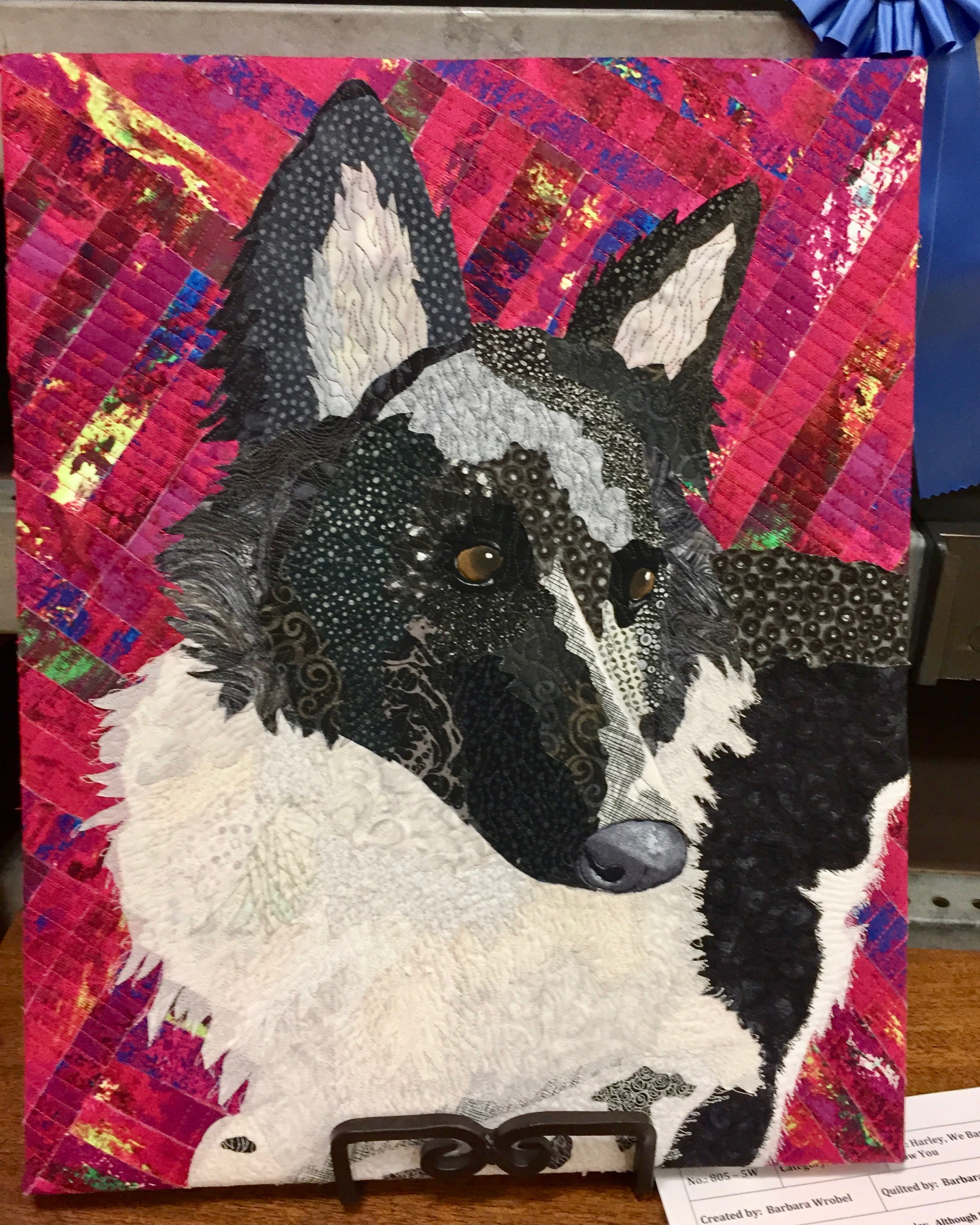 And a little bit of Sue Spargo inspired wool appliqué from Marie Blunk. 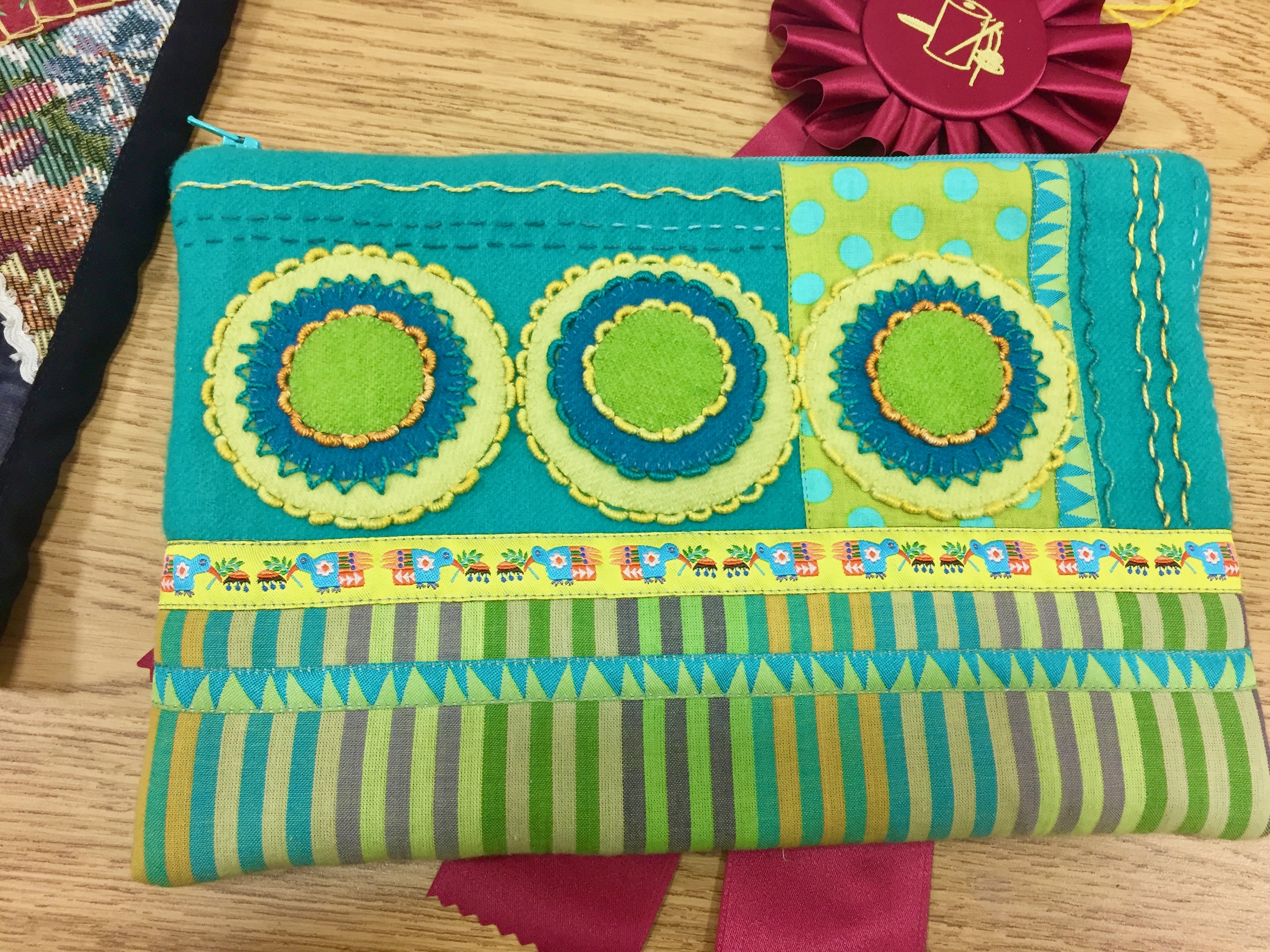 A number of vintage quilts were displayed in between all the members’ creations. I noticed this Magic Vines quilt belonging to Kathy Boo. 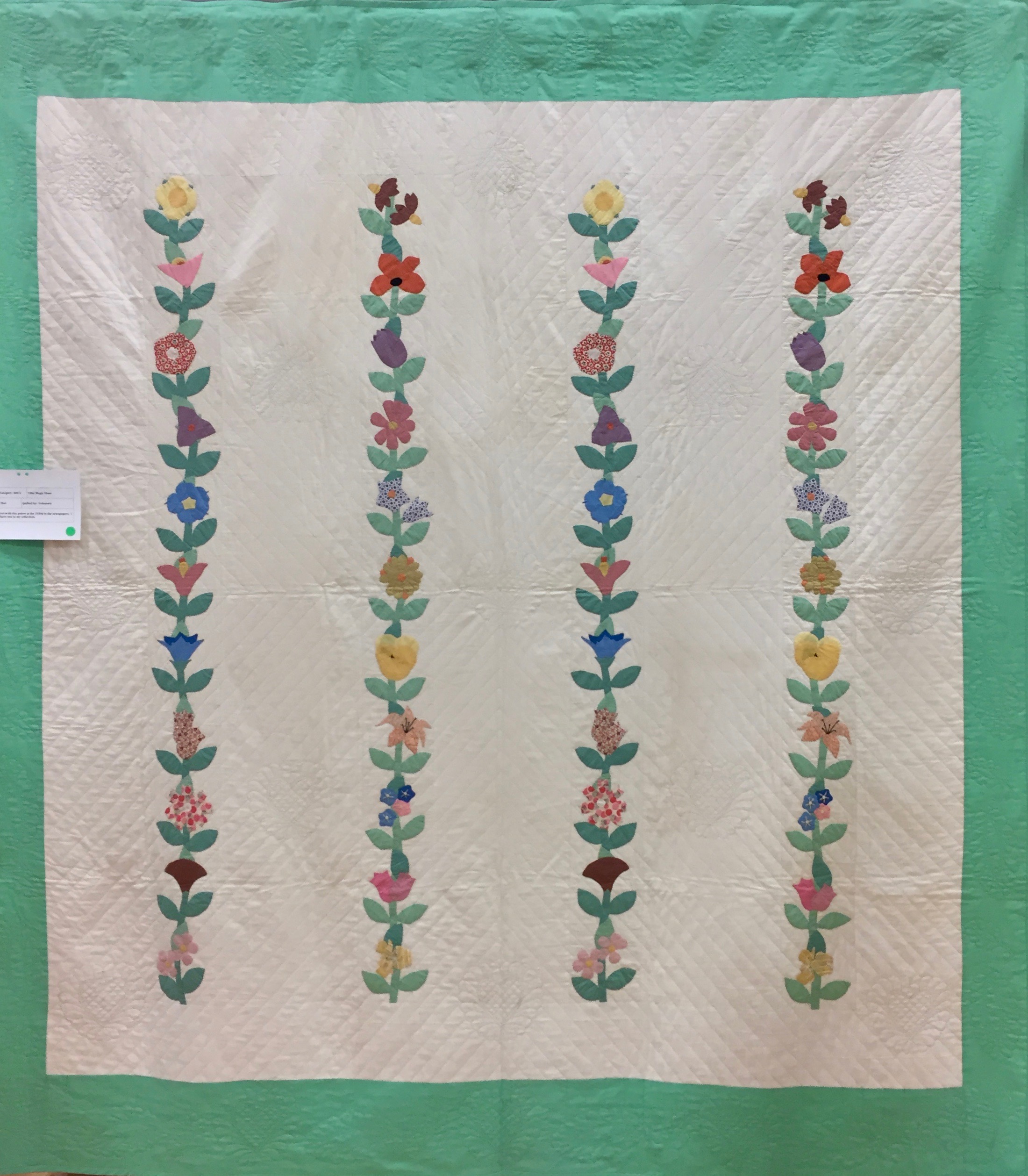 The card said it is a Nancy Page design published in the 1930s. I noticed it because I made a version of it using Eleanor Burns’ pattern when I was teaching at Pieceful Hearts. It features in my Language of Flowers lecture. 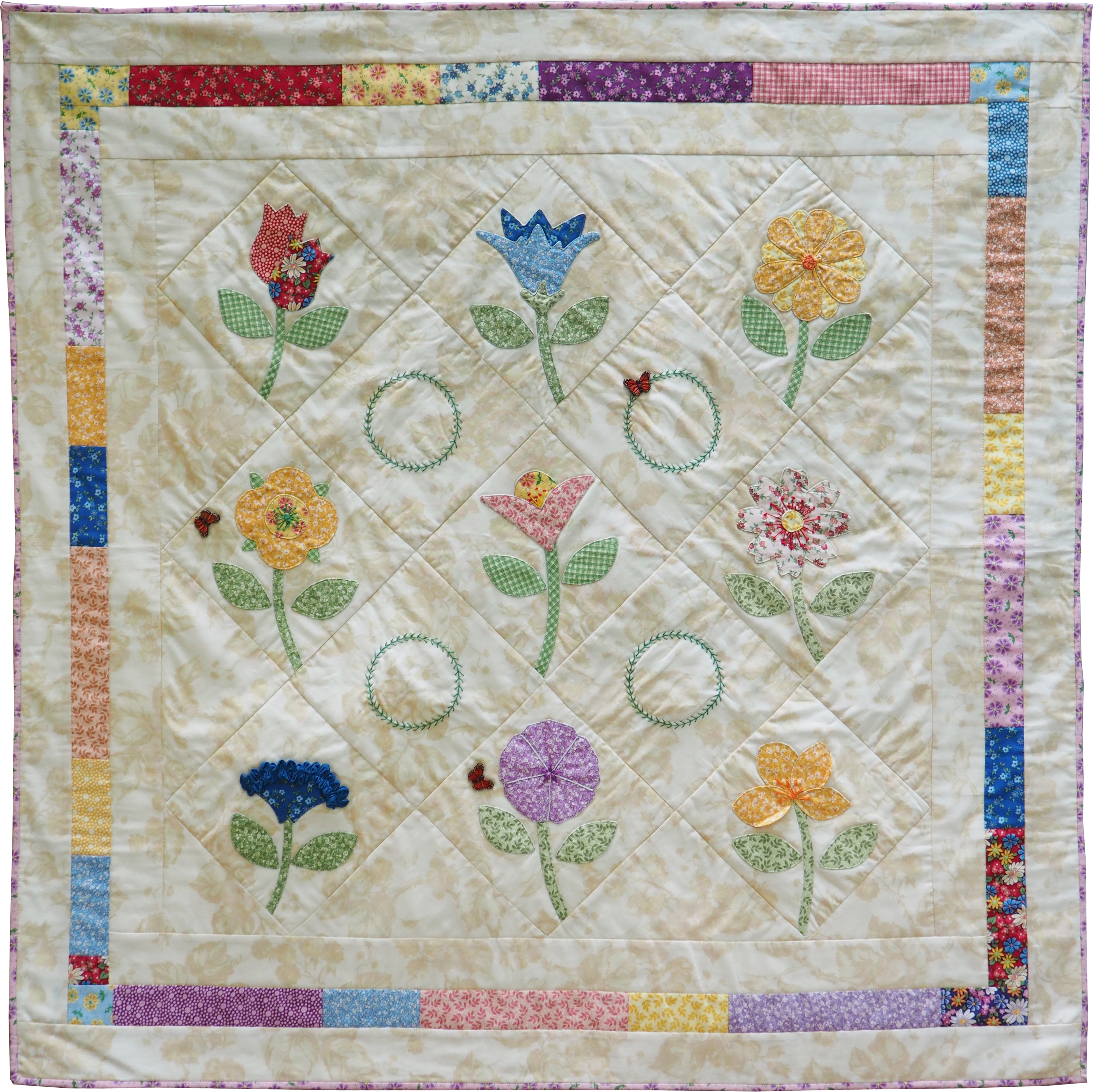 I didn’t have quite so many flowers in my version.

I was at the show for over two hours. It was lovely to see so many familiar faces. It was a very nice, well organized show with lots to see and do. I missed the demos and bed turnings but they were there. I didn’t do much shopping, just a new spray bottle, a kit from Karen Jablonski to try some traditional French Boutis work, and a Chicago skyline kit from Second City Quilts.

You know it took a lot of work to make everything run so well. Thank you Heritage Quilters Guild.