Skip to content
Home > This and that > International Quilt Festival – Chicago 2017, part 2

The days pass very quickly at Quilt Festival. It was only when I got home I realized that I hadn’t taken time to look at the quilts! But then, I’m not sure when I could have looked.  Every moment was accounted for. I guess I could have gone in earlier and looked around before the show opened. Having an exhibitor’s badge allow entry at 8 in the morning…

Something to think about next time.

So, what happens after the show floor is closed?

On Thursday evening I had arranged to have dinner with members of my bee. We had a super time catching up over our food in the Hilton restaurant. No pictures I’m afraid.

Friday evening I had a ticket for the Iron Quilter Challenge. I wasn’t on faculty so I didn’t get the opportunity to defend last year’s title but I wanted to go and heckle!

Karen Stone had wisely asked Valli to be on her team. Here’s Valli  in action stitching the borders for the Stone Cold Foxes. 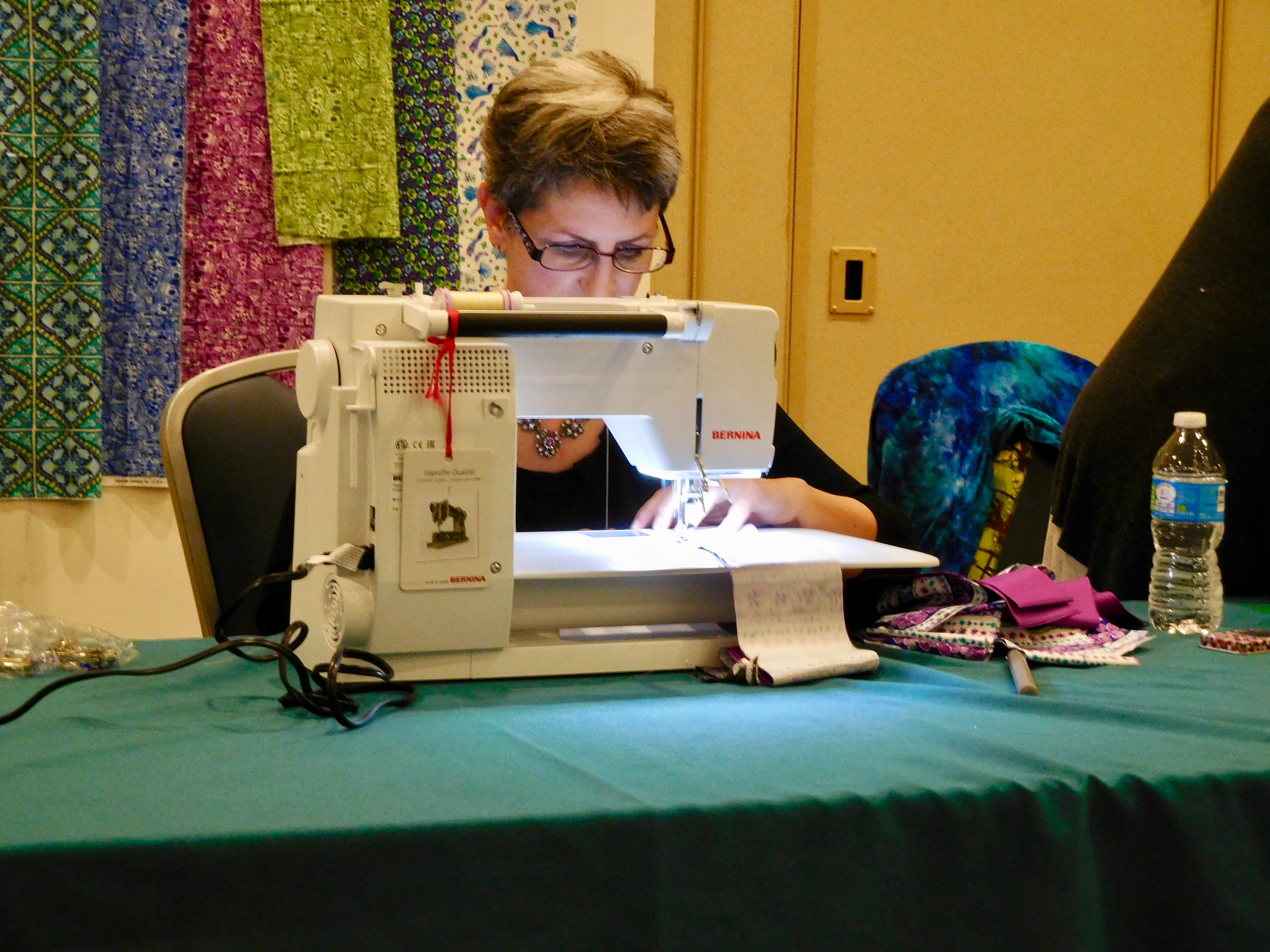 David Taylor was also on Karen’s team and he supplied the body for a peacock design, drawing inspiration from their Michael Miller fabric.

Here’s the team with their finished top. 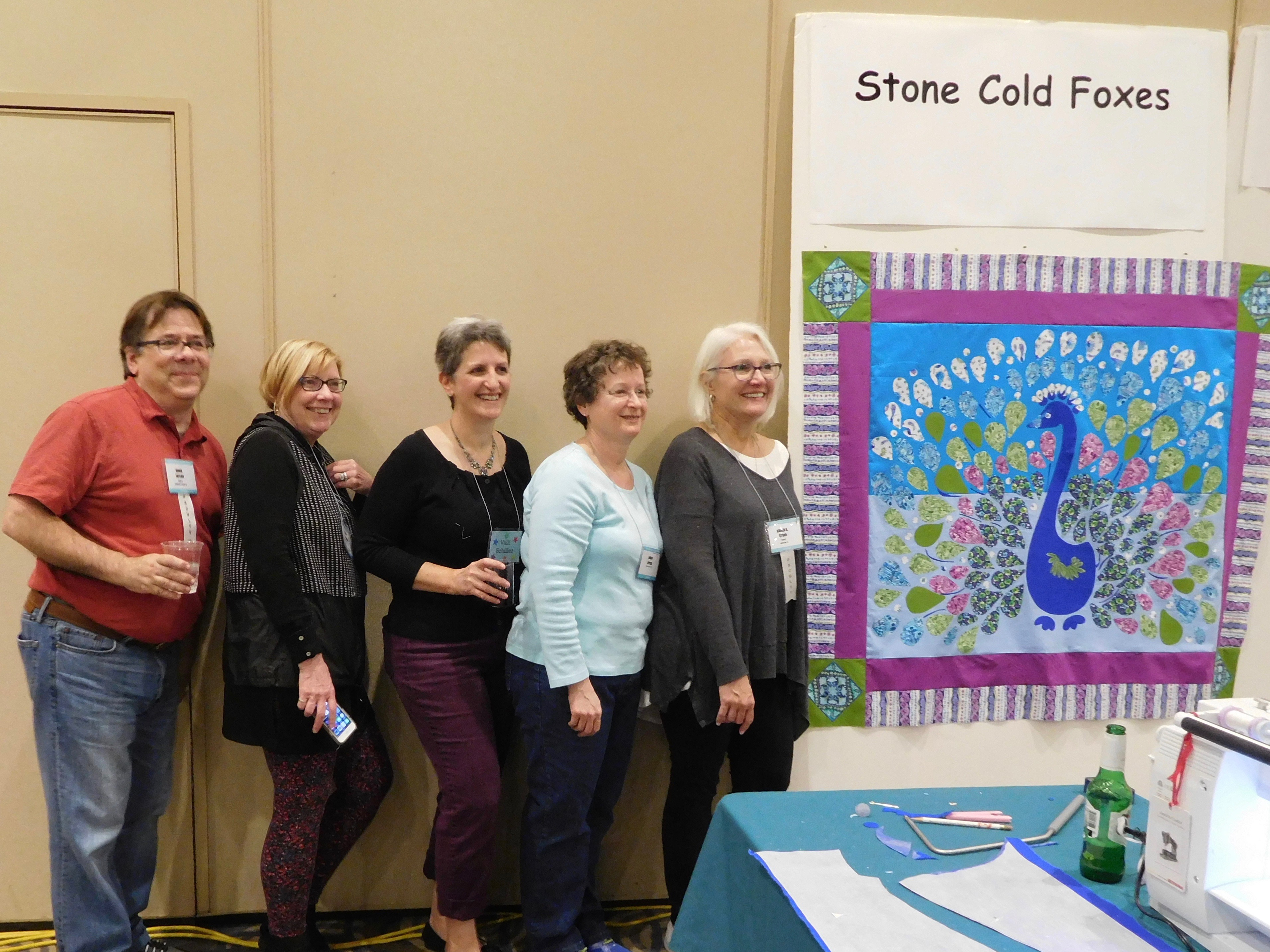 Charlotte Angotti had a selection of fabrics from Hoffman. Here is their completed design. 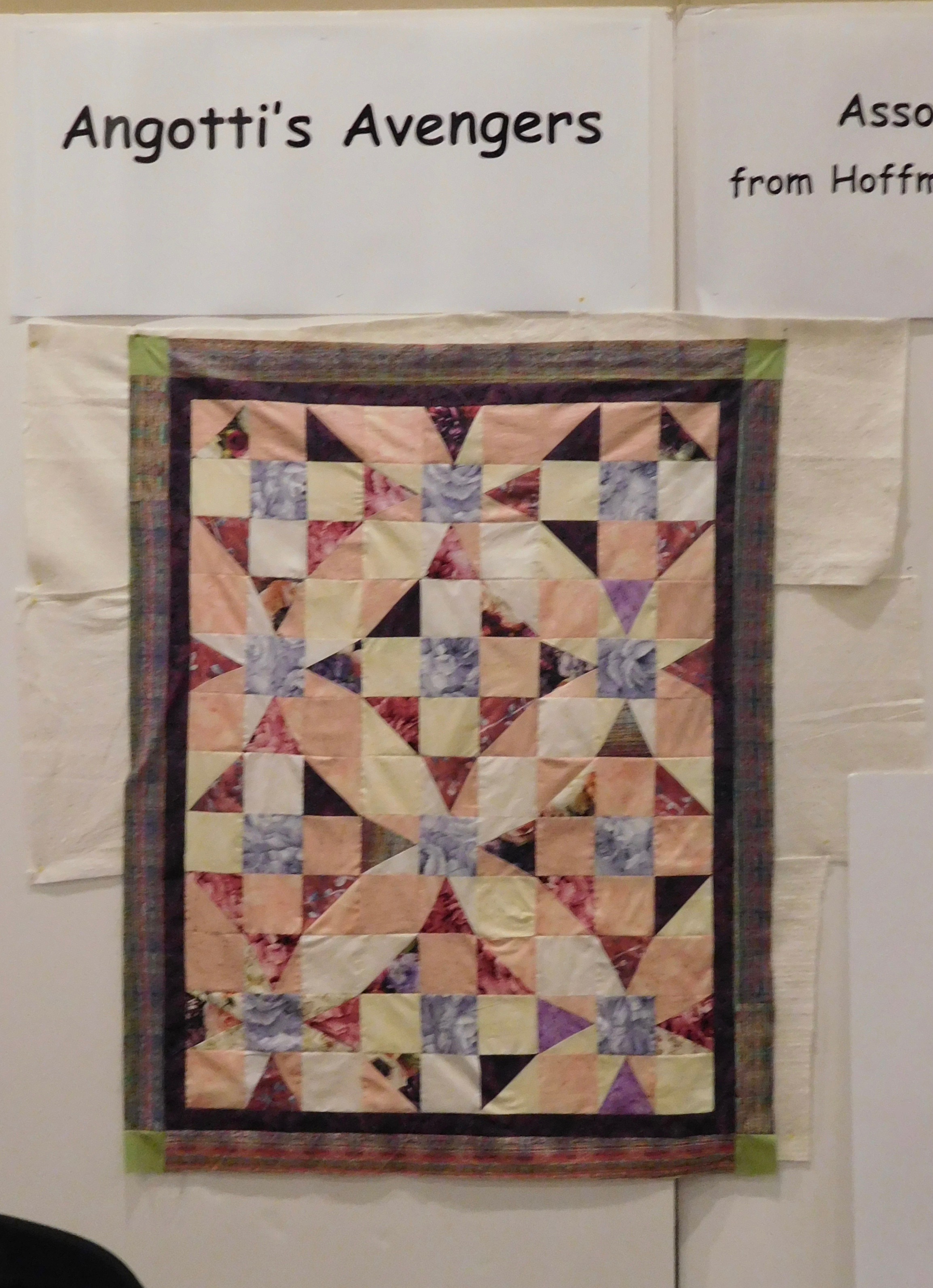 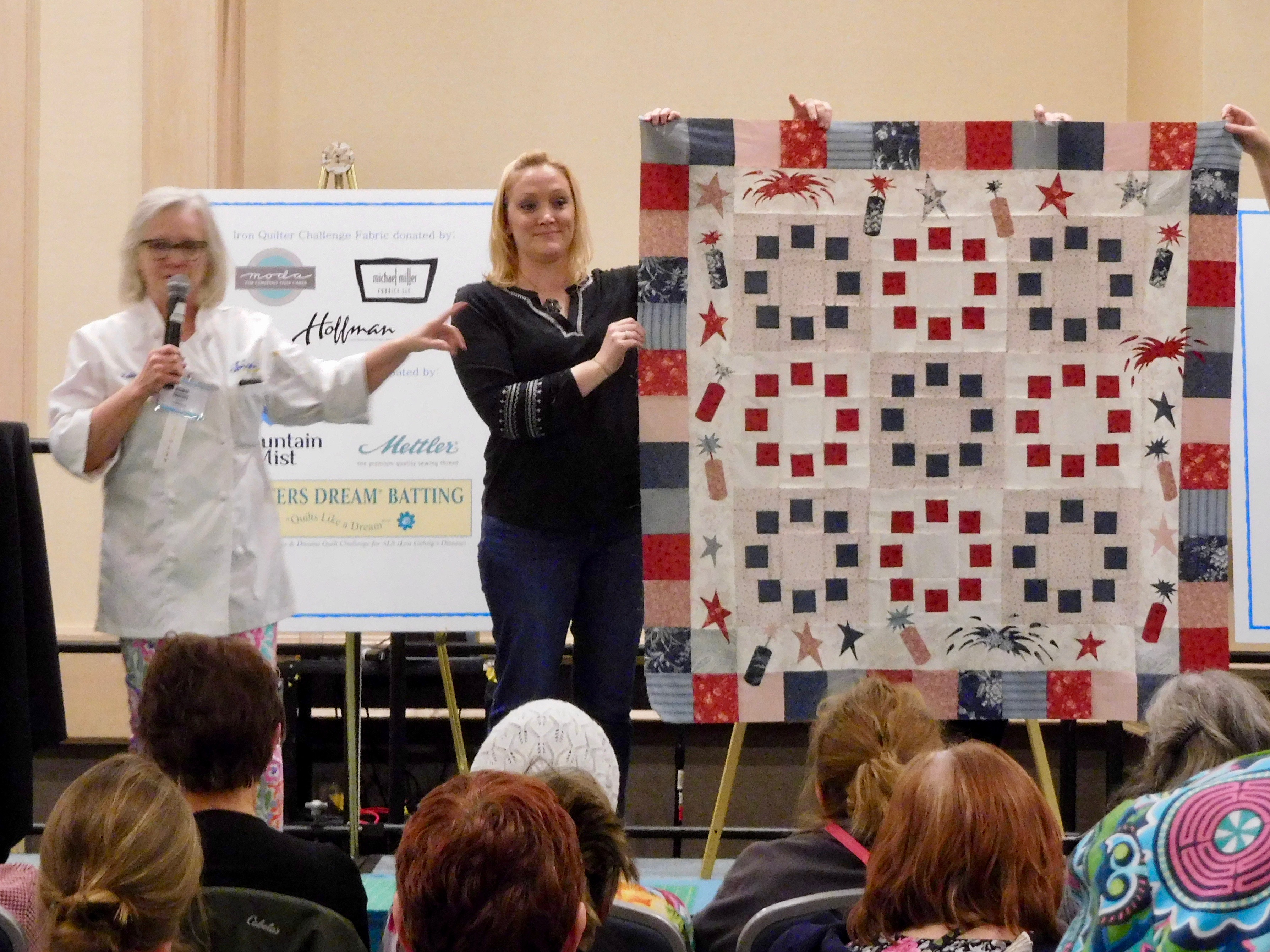 And the winner was? 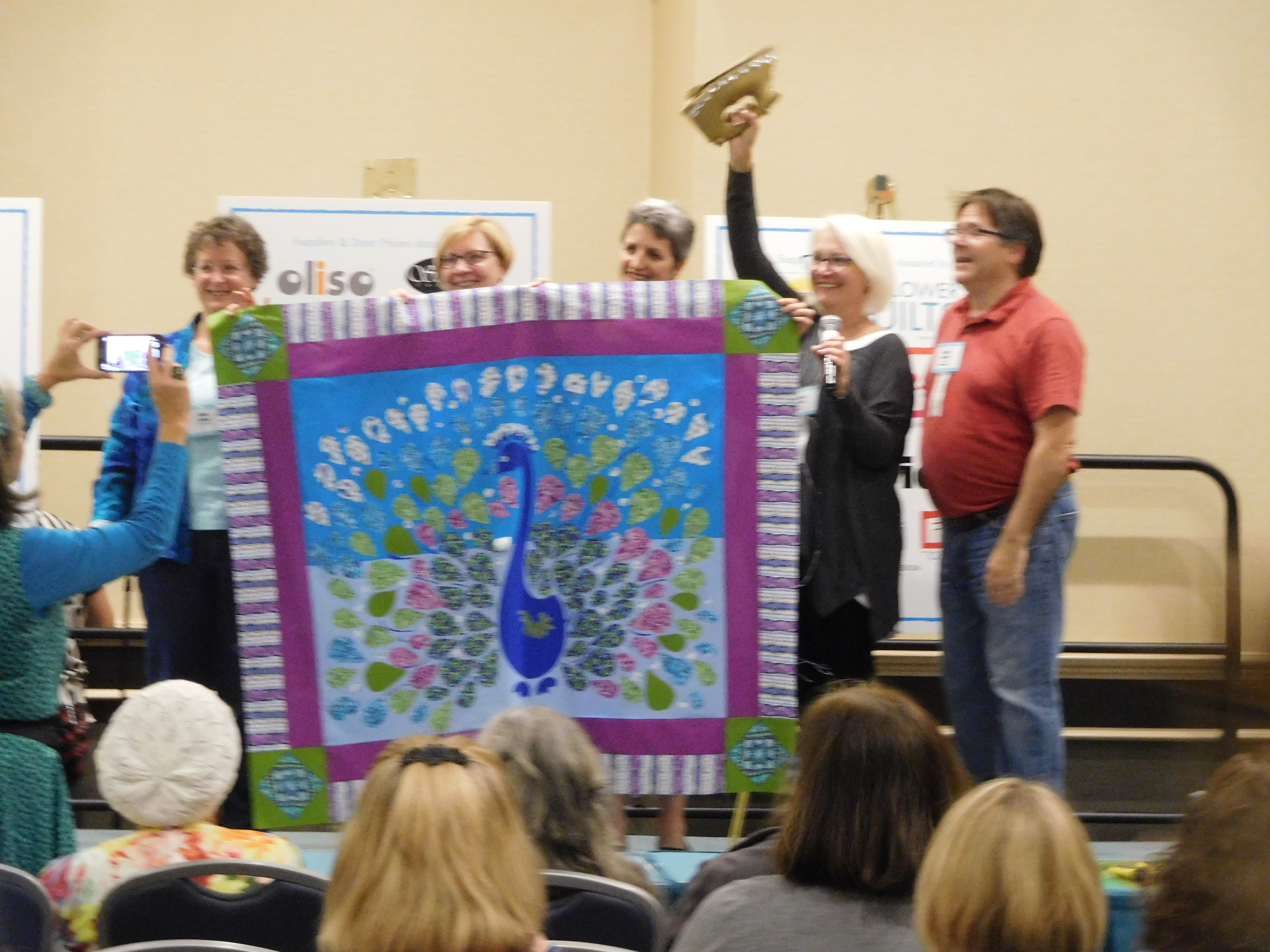 The Stone Cold Foxes! Sorry about the quality of the picture… I was a fair way back from the stage.

It was a fun evening. I found a quilter from Ramsgate in Kent in the audience (the bag with the Union Jack on it gave her away) and had a nice time with Cathy who is visiting the States for six weeks.

There was a new event this year and I bought a ticket to check it out. The Last Course followed straight after Saturday’s show closing. It was two hours of show and tell from Charlotte, Karen and Debby’s classes, dessert and a few games…

Some of the teachers had already left for home so I got asked to host a table. No problem! I took over Kimmy Brunner‘s table. We had plenty of time to get to know each other before the games began!

And this is what we did… 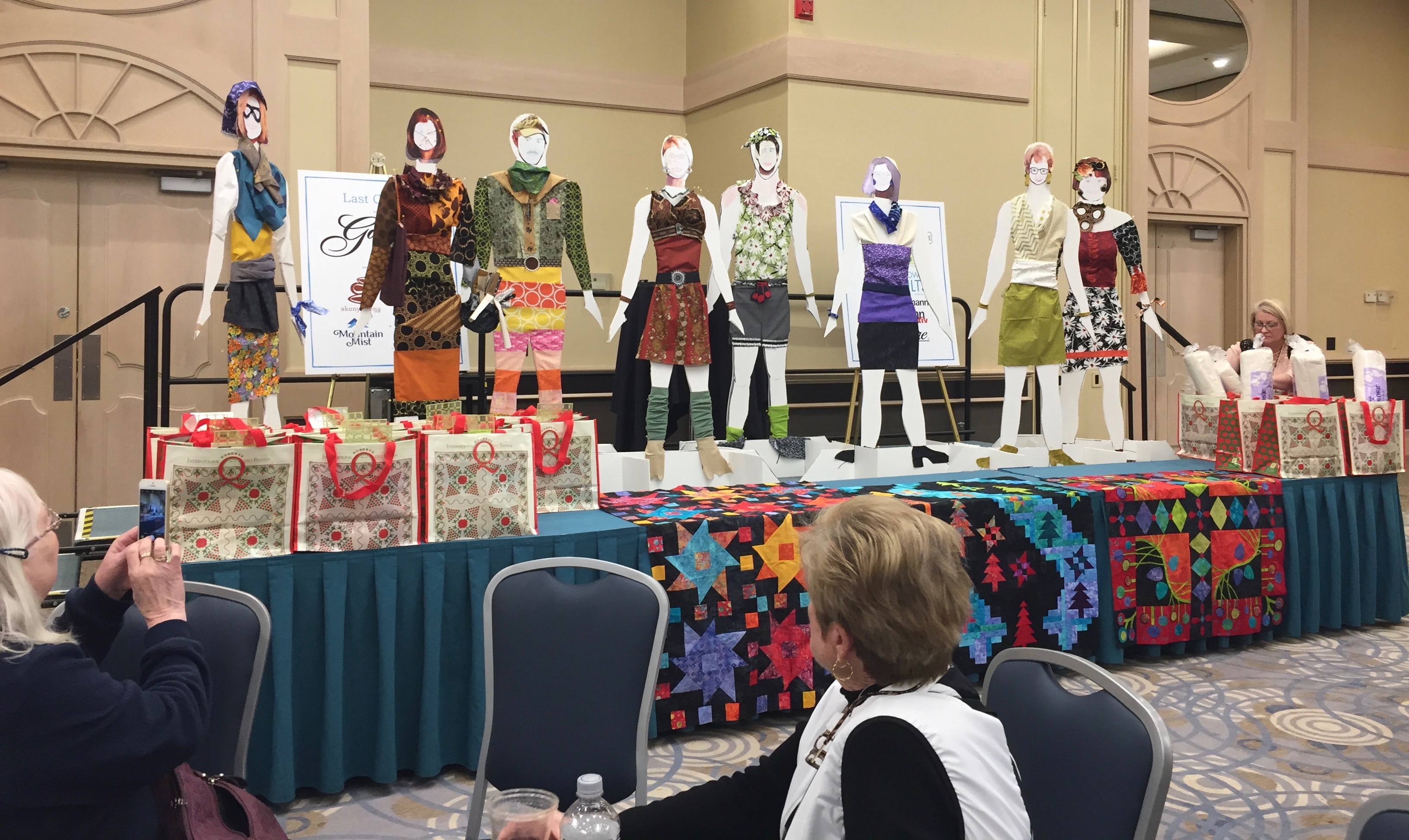 Each table had a foam core mannequin to dress, using the materials provided. I just encouraged my team with “the prizes will be worth making an effort for” and they did all the rest. Our Kimmy is the second from the left. Isn’t she elegant? And… we won! Goody bags for all. Definitely worth a few minutes of concentrated effort.

It was lovely sociable event with just the right balance of socializing, show and tell, and games. If they do it again next year give it a try!

Then it was time to gather my stuff, find my car and drive home. The tote bag I won was very useful.

Festival will be back in Chicago next year April 12-14. I already know I will be in Oregon with the Westside Quilters Guild from the 13th after teaching at a Craftours Cocoon in Naperville from the 8th to the 12th. Something to think about if you are planning on attending Festival? Five days at the Cocoon followed by the show… You can find the details on the Sew Many Places website by clicking my highlighted link for the event.

Home was only forty five minutes away on the not too busy highways. I had a late start to my day Sunday but Monday I was back out again with the Prairie Patch Quilters in Mundelein. More about that next time!

Quilting This and that