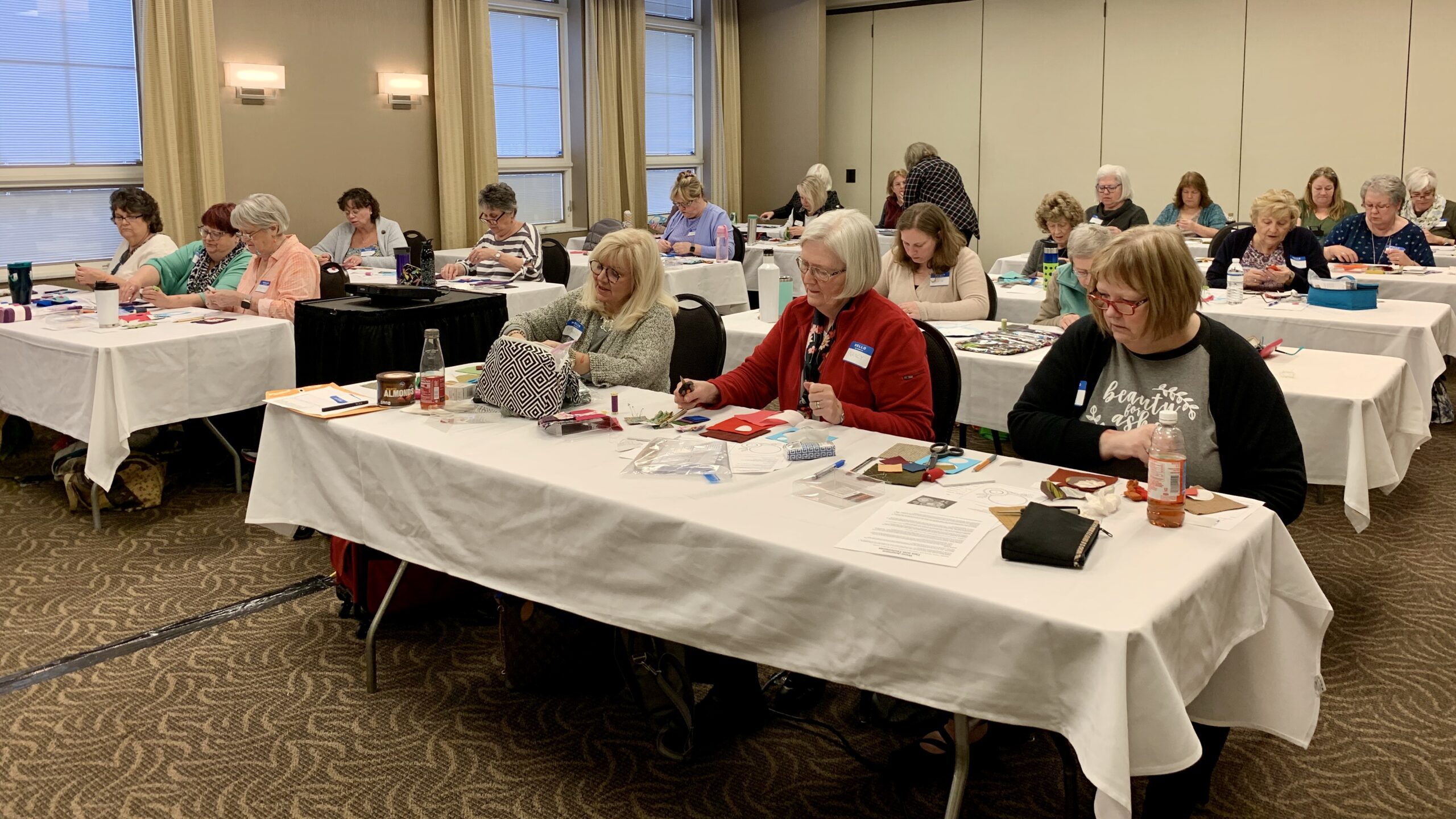 Everything fitted in, no problem! 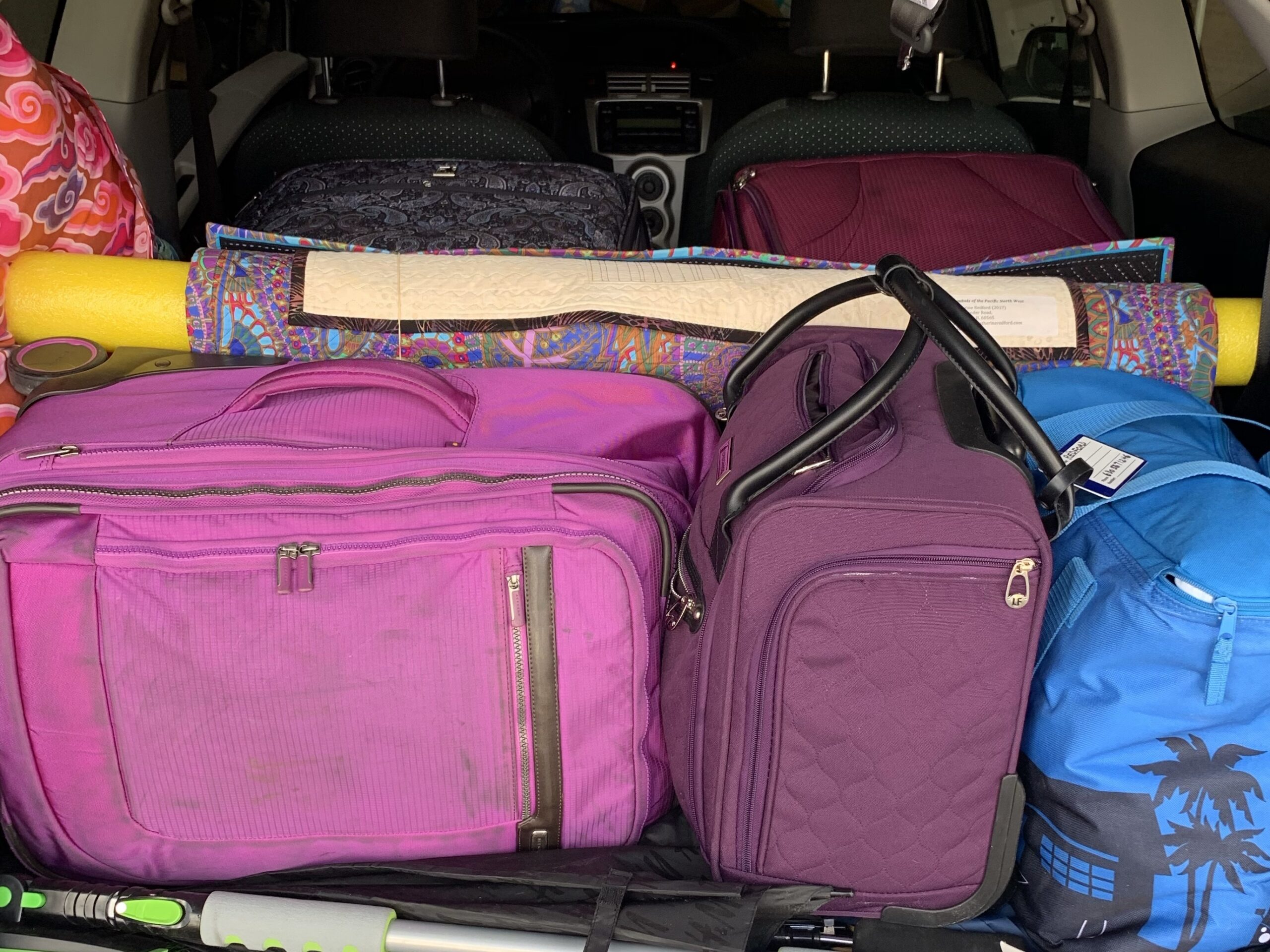 Two big suitcases with class supplies, a small one with my clothes and personal items, my tech bag, a cooler with healthy food and two quilts on a pool noodle! All in the back of my two door Toyota Yaris. They don’t make them like that any more 🙂

Four hours later I was pulling up outside the Courtyard Hotel attached to the Monroe Convention Center in Bloomington, Indiana. There was a little less construction on I-65 than two years ago, and a little more of the I-69 has been finished, which combined to speed me on my South way last Wednesday.

I was aiming to arrive in time to join the other teachers looking around the show before the crowds appeared on Thursday. All was good. I checked in, unpacked my clothes, and took my work bags to my class room with time to spare. 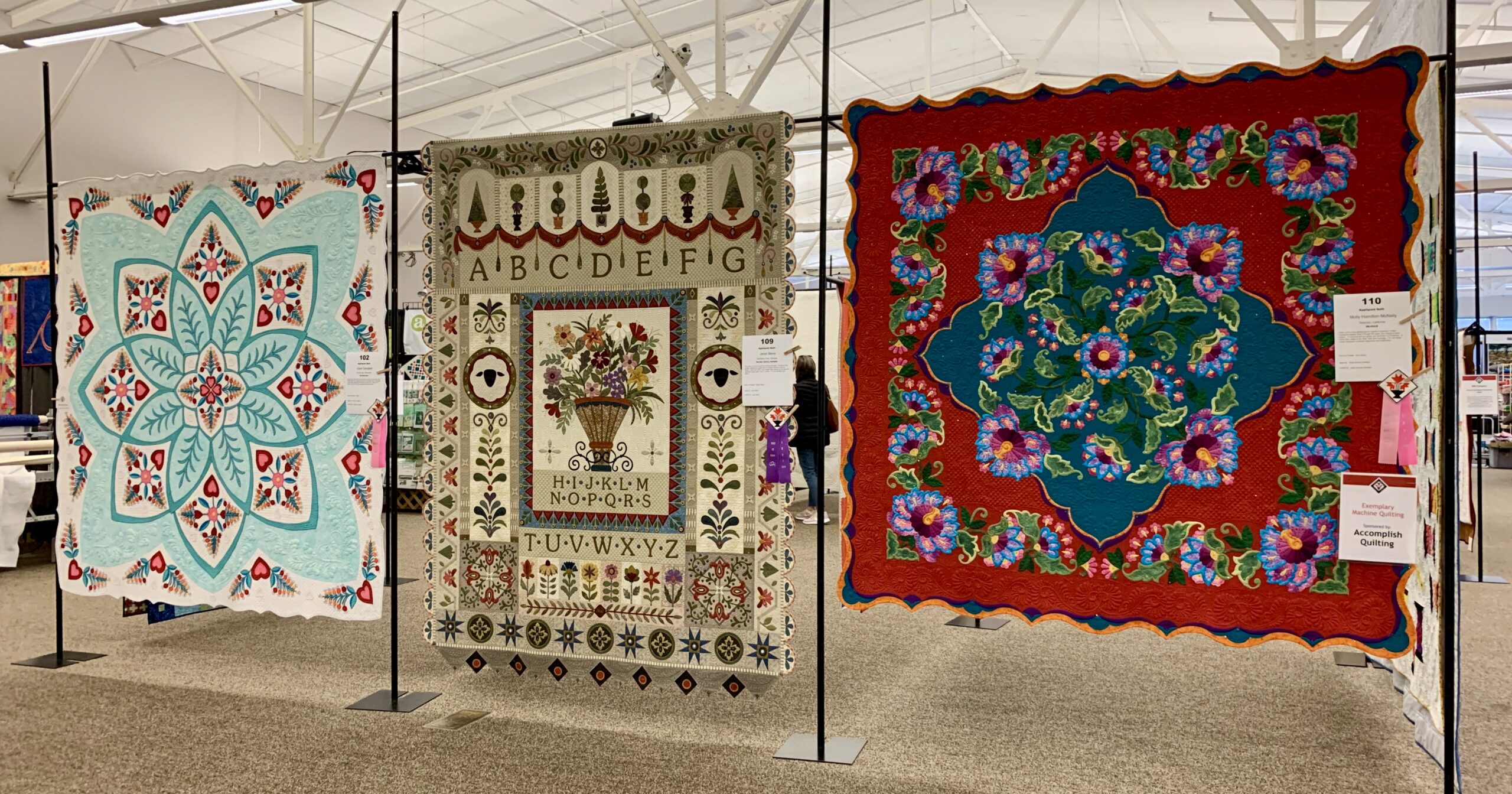 We each had to choose a quilt to be awarded a faculty ribbon. I decided my choice could not have already received a ribbon and it had to catch my eye… 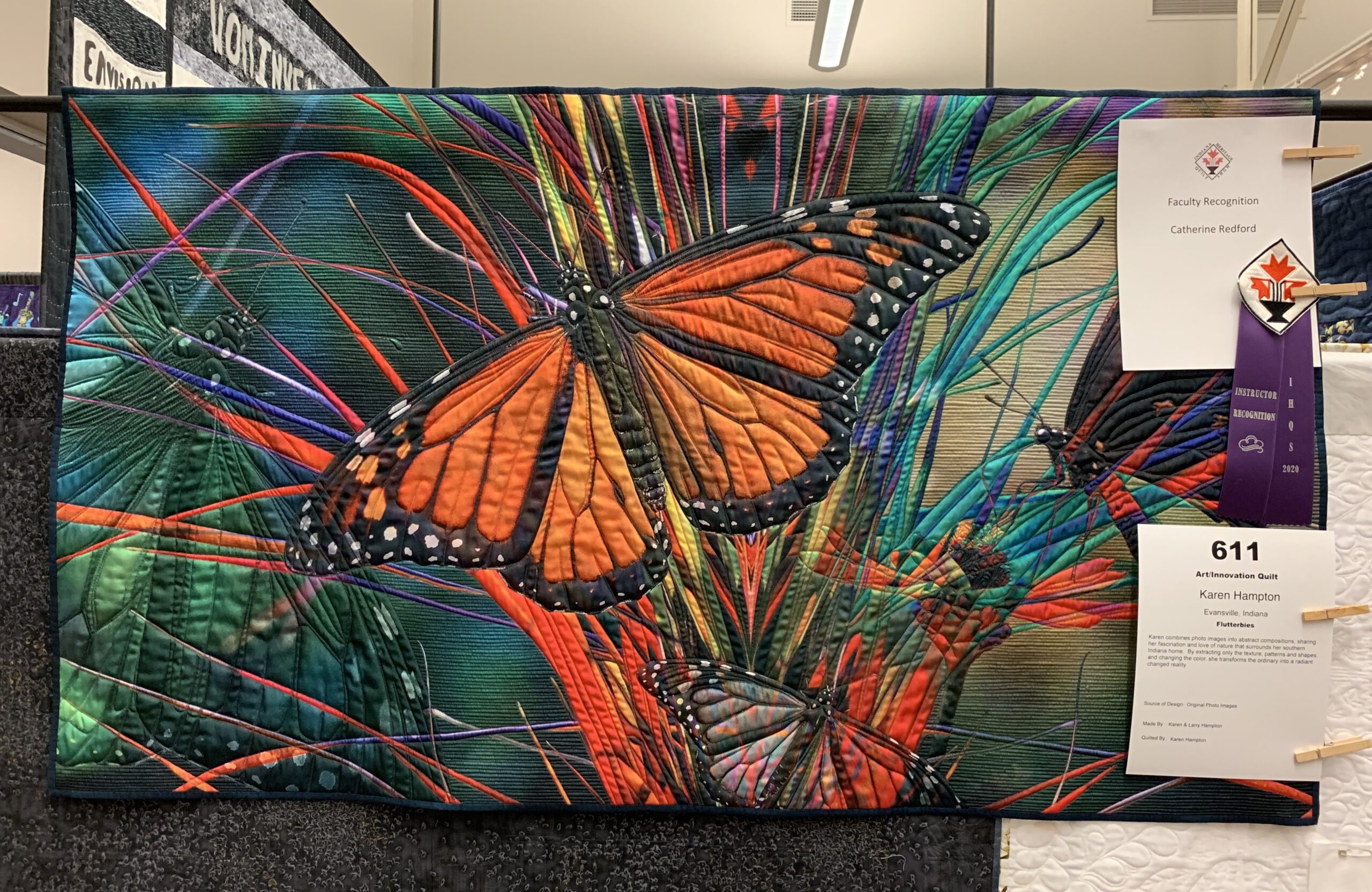 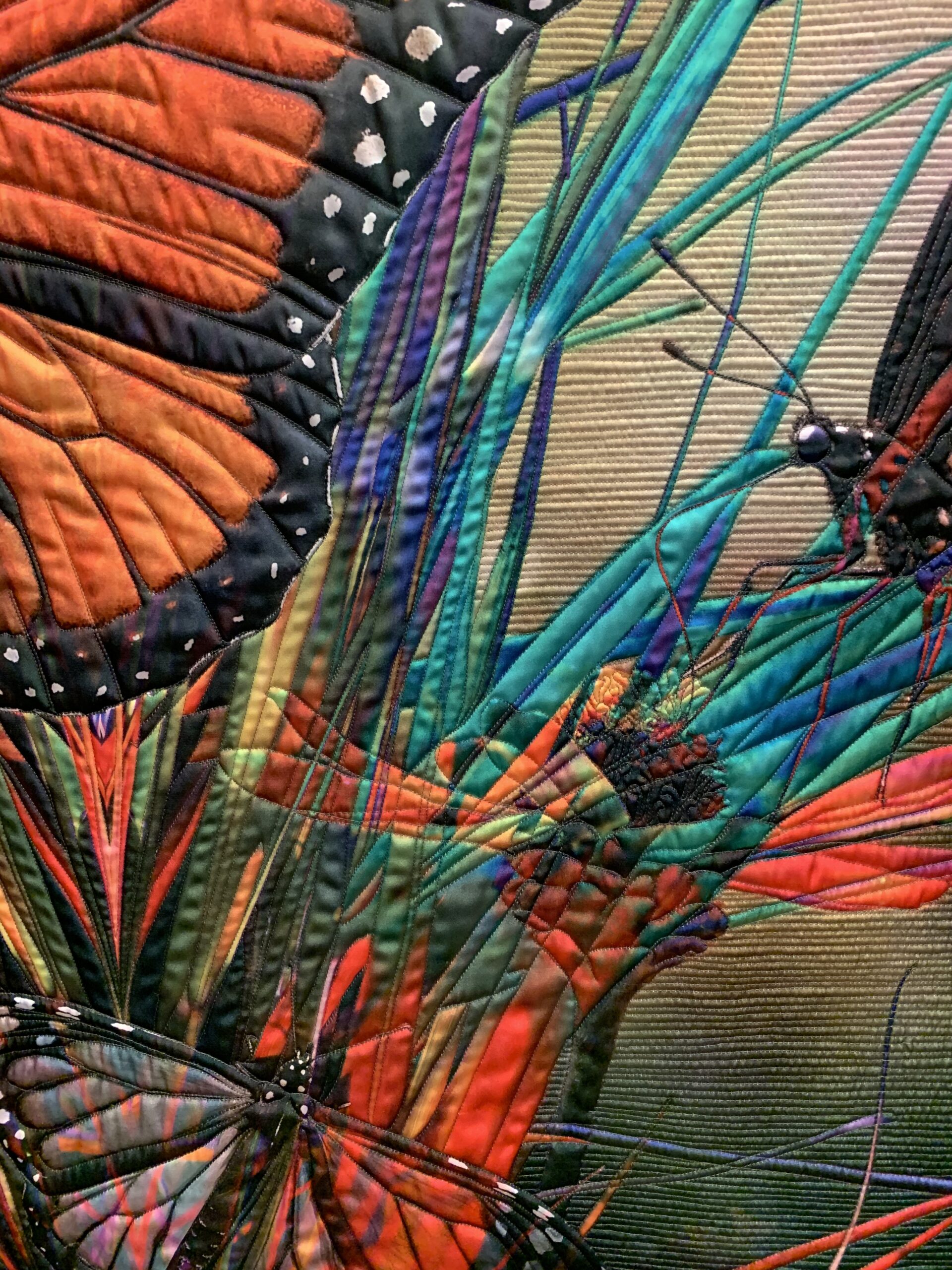 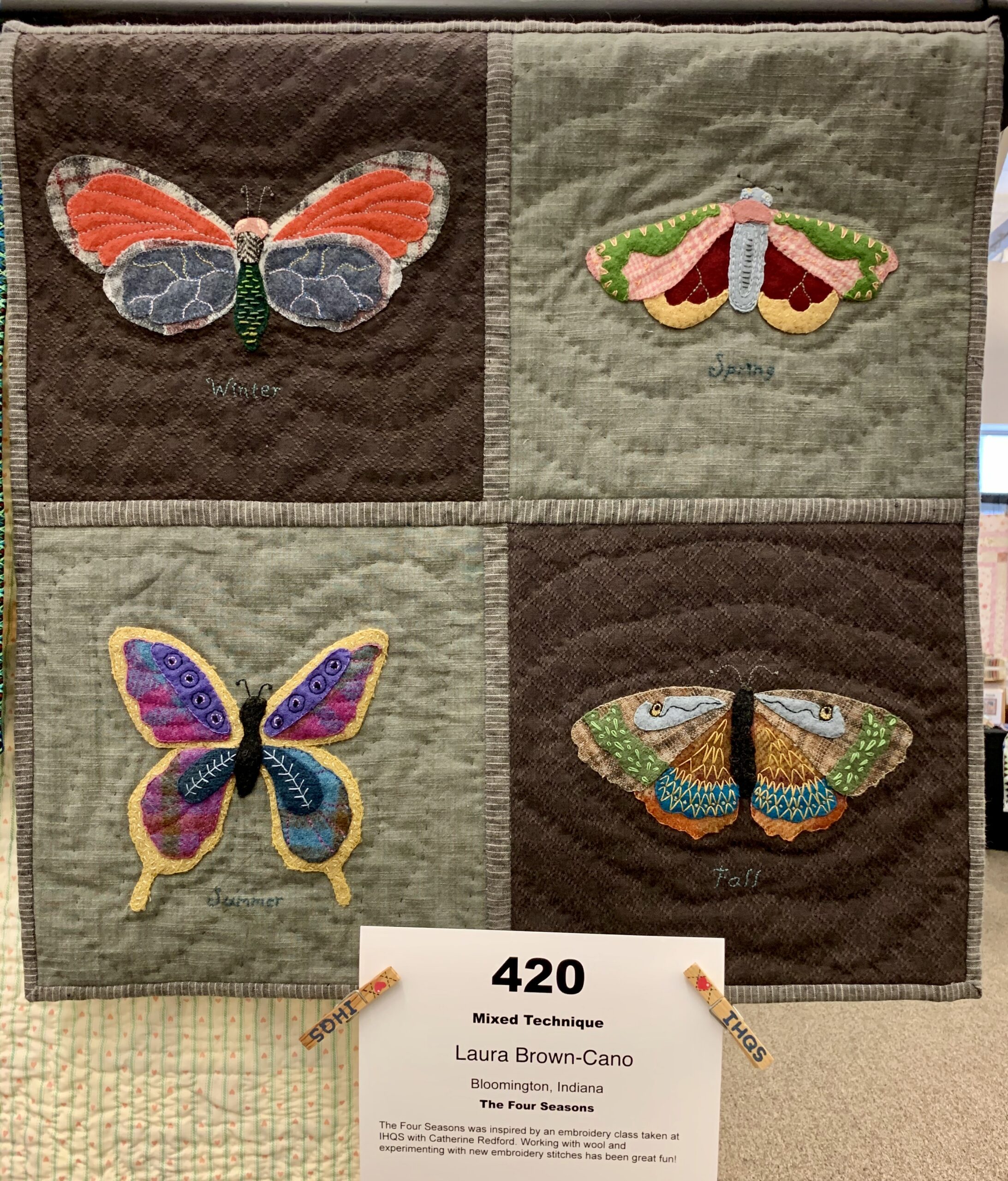 Did you spot anything familiar about Laura’s quilt?

The Indiana Heritage Quilt Show is an independent show organized and staffed by an amazing group of volunteers. The quilts come from all over the US ( and beyond). The competition quilts range from the show stoppers that we saw on the front row, made as show quilts, to a great selection of quilts from local quilters that will go home to keep someone warm on a cold winter’s night!

It’s really good to see them all hanging together. There were also several special exhibits to enjoy, including one from this year’s featured artist, Jen Broemel. 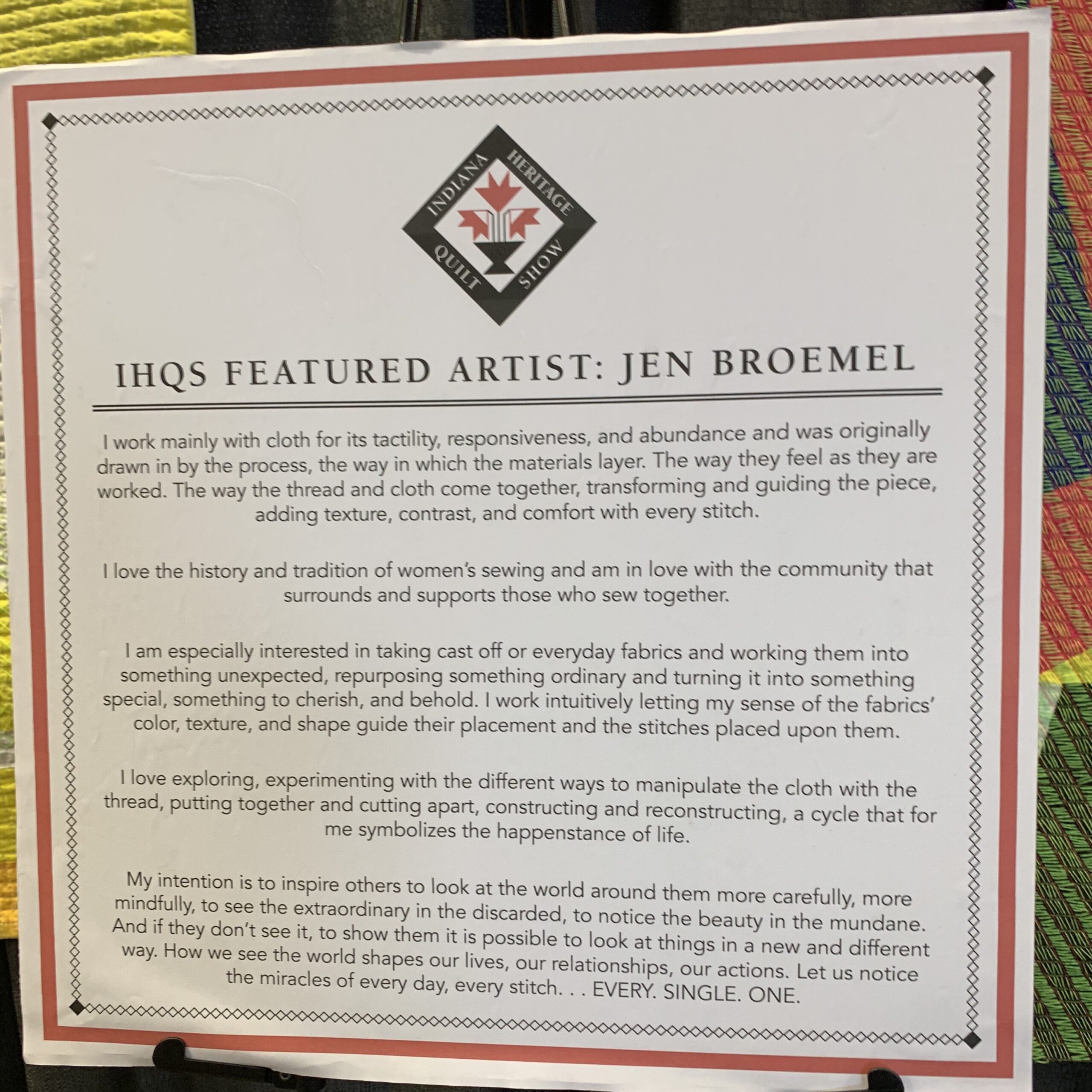 I was attracted to Jen’s use of hand stitching on her quilts. Here’s a few of my favorites. 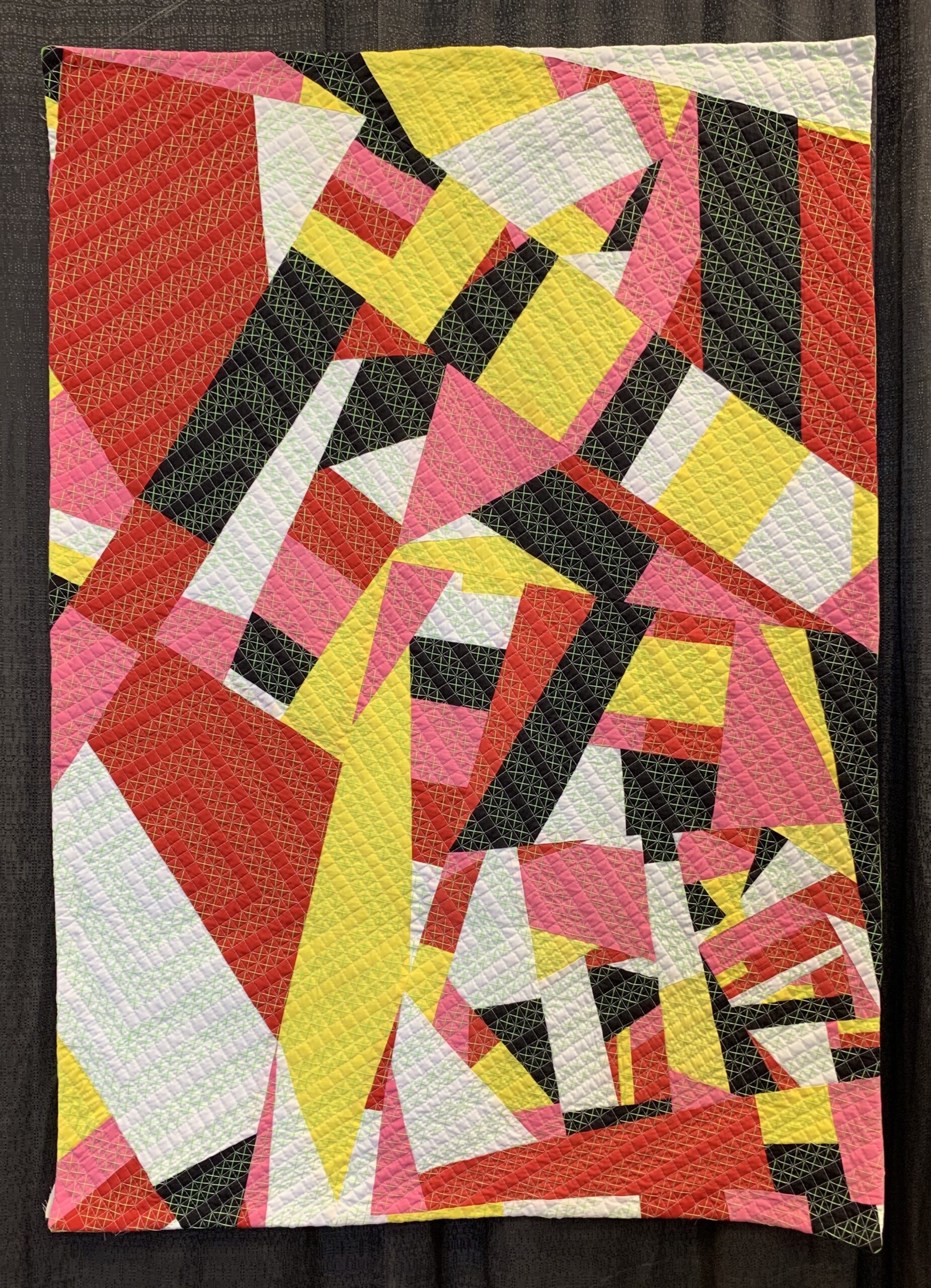 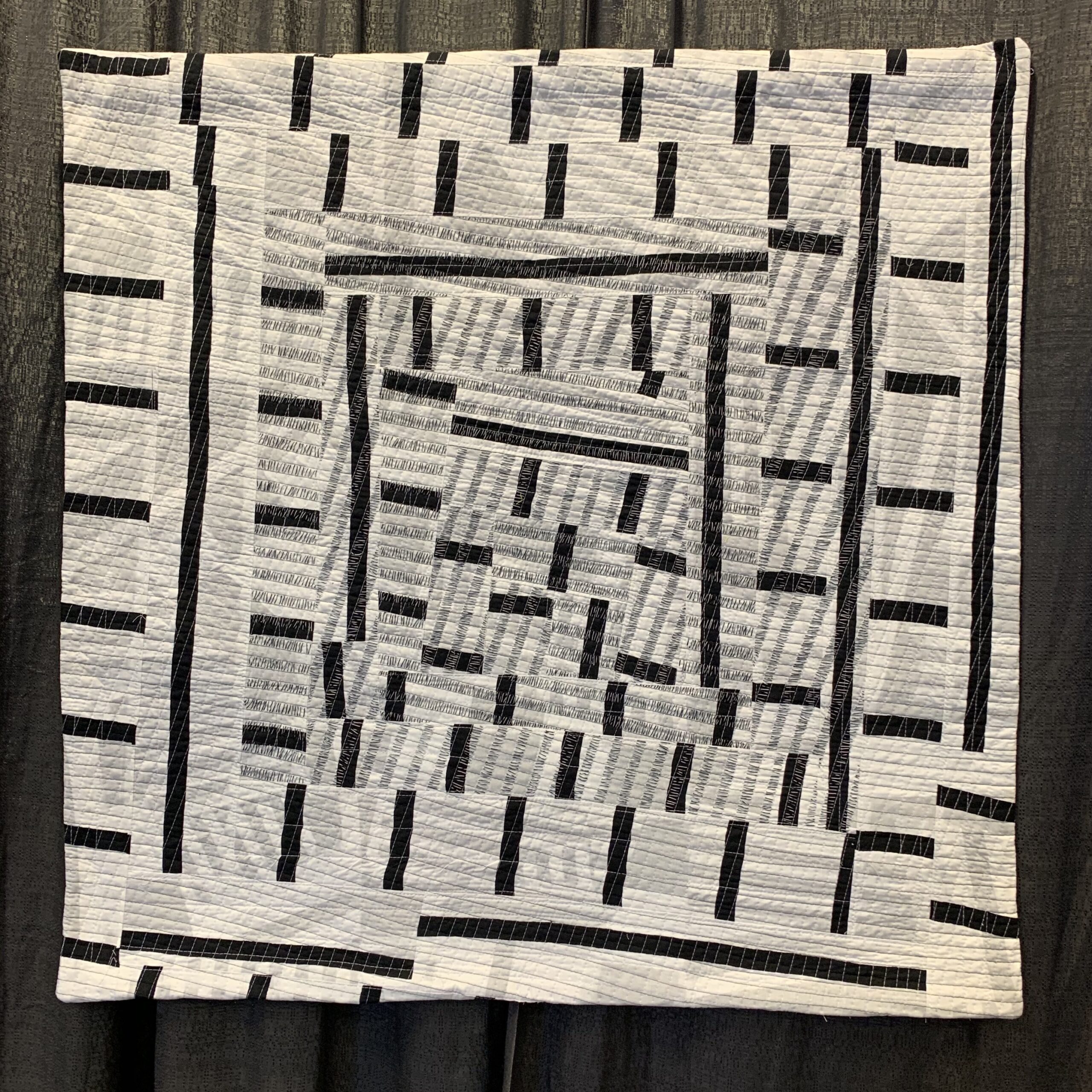 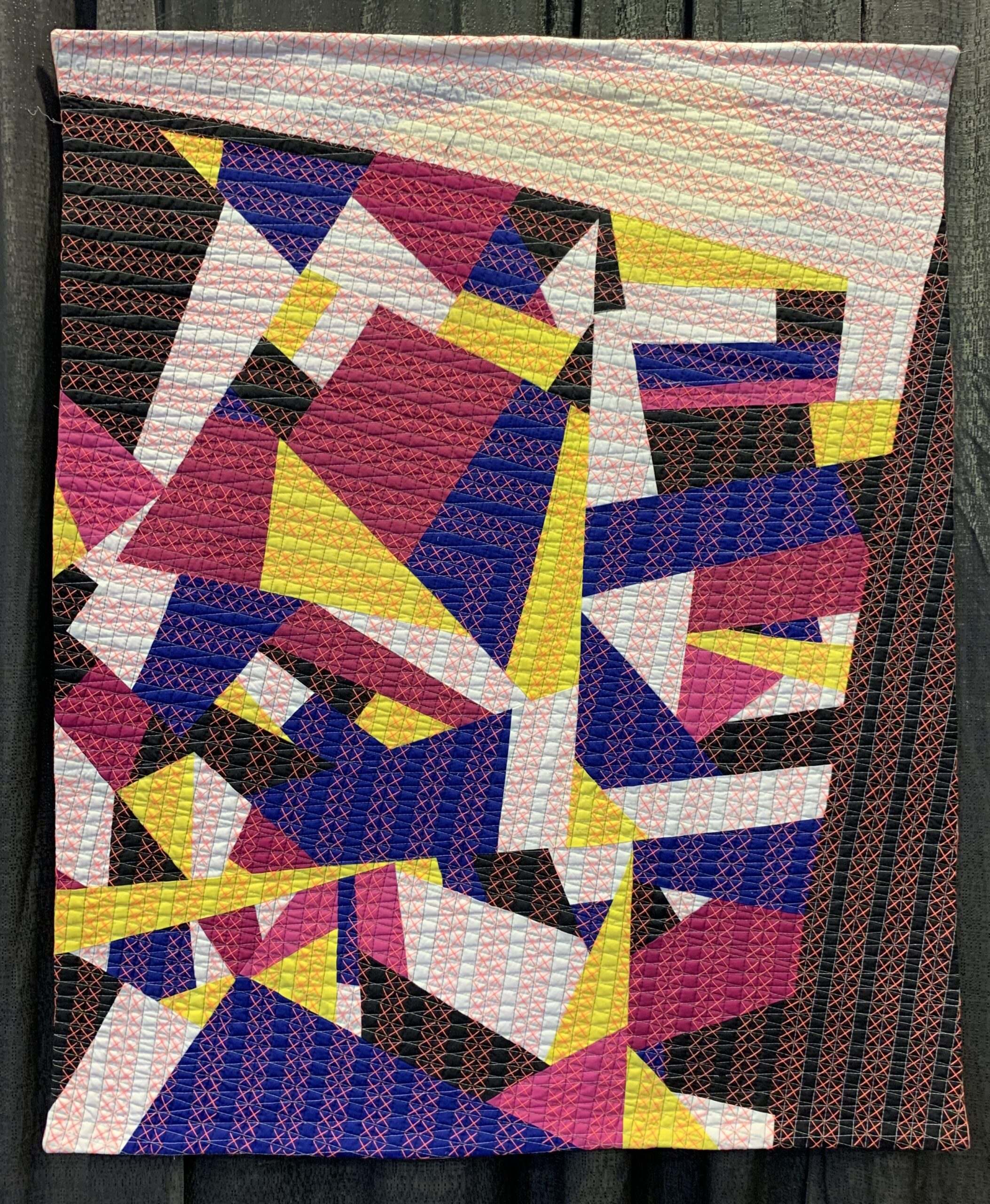 Jen was busy anytime I walked past while the show was open so I didn’t get a chance to chat. You have to know all that handwork is not done in one day!

Dinner with Gyleen, Karen and Jane, the show chairperson followed…and that was Wednesday.

Work started in earnest on Thursday with an Embroidery and Beading for Quilters class. Just one picture of one student’s embellished embroidery. 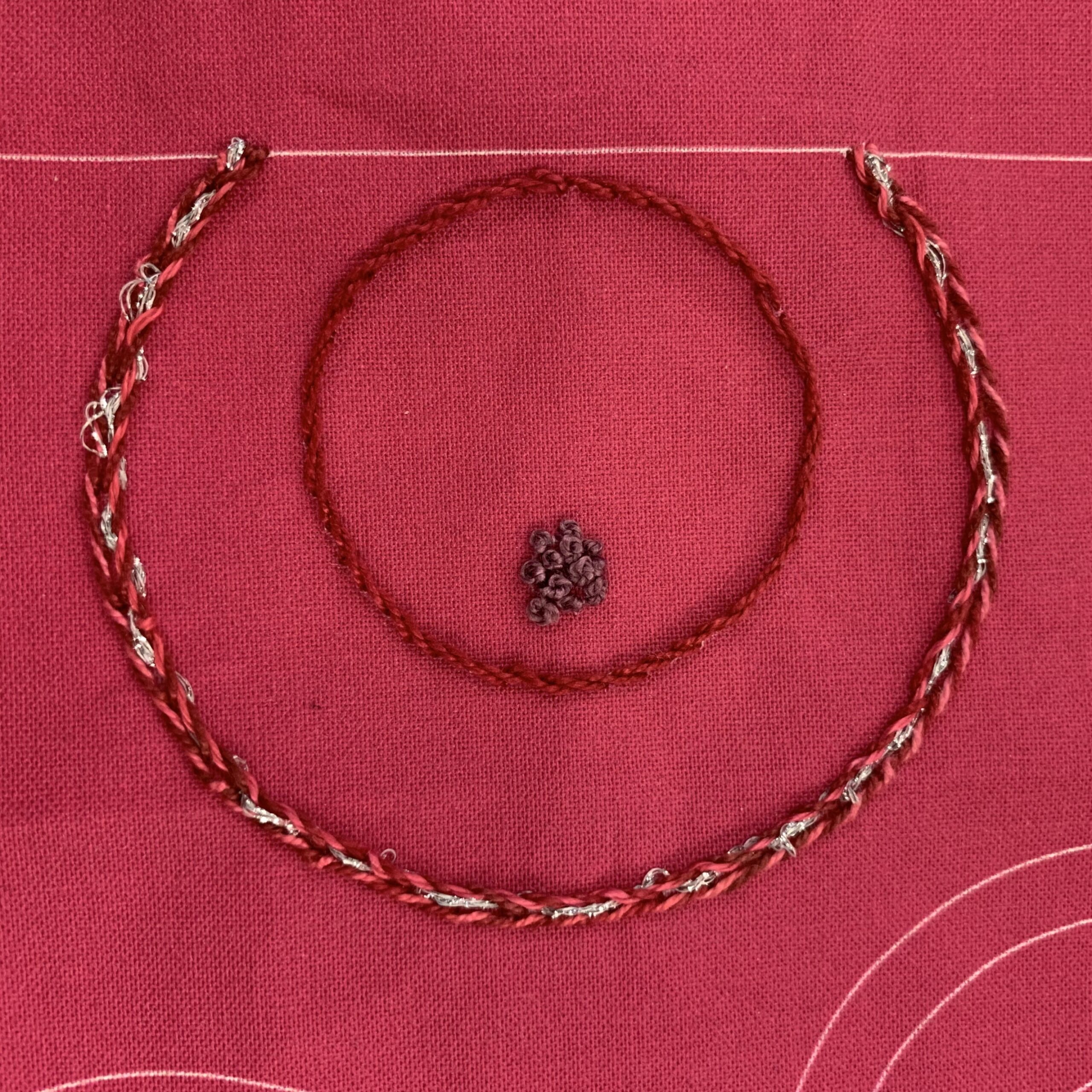 Wool Appliqué was the order of the day on Friday. Looking good? 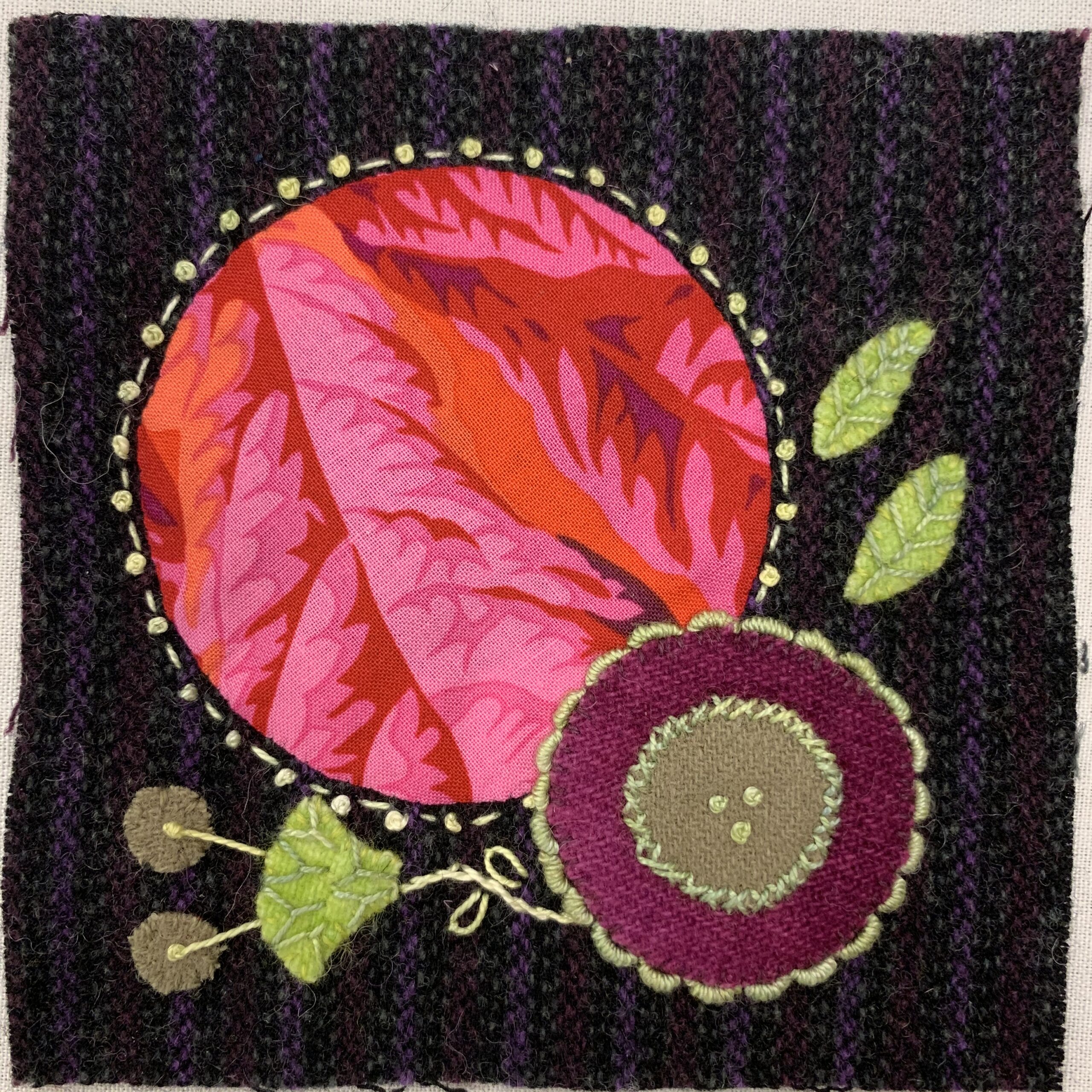 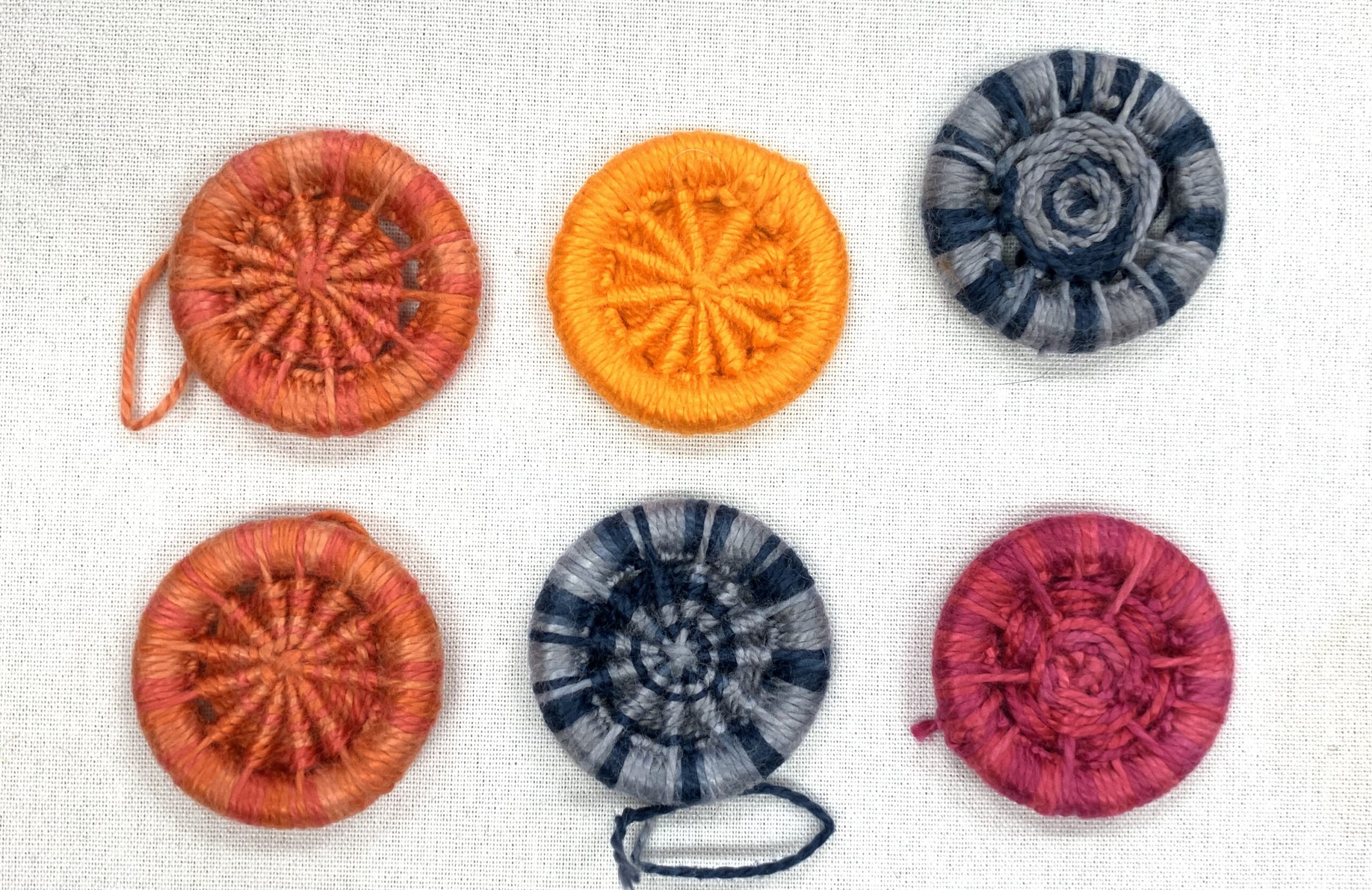 I also fitted in a fun evening out at The Tailored Fit who were celebrating becoming a BERNINA dealer with Kaye England and Terri Gunn, past and present owners of Quilt Quarters in Carmel. 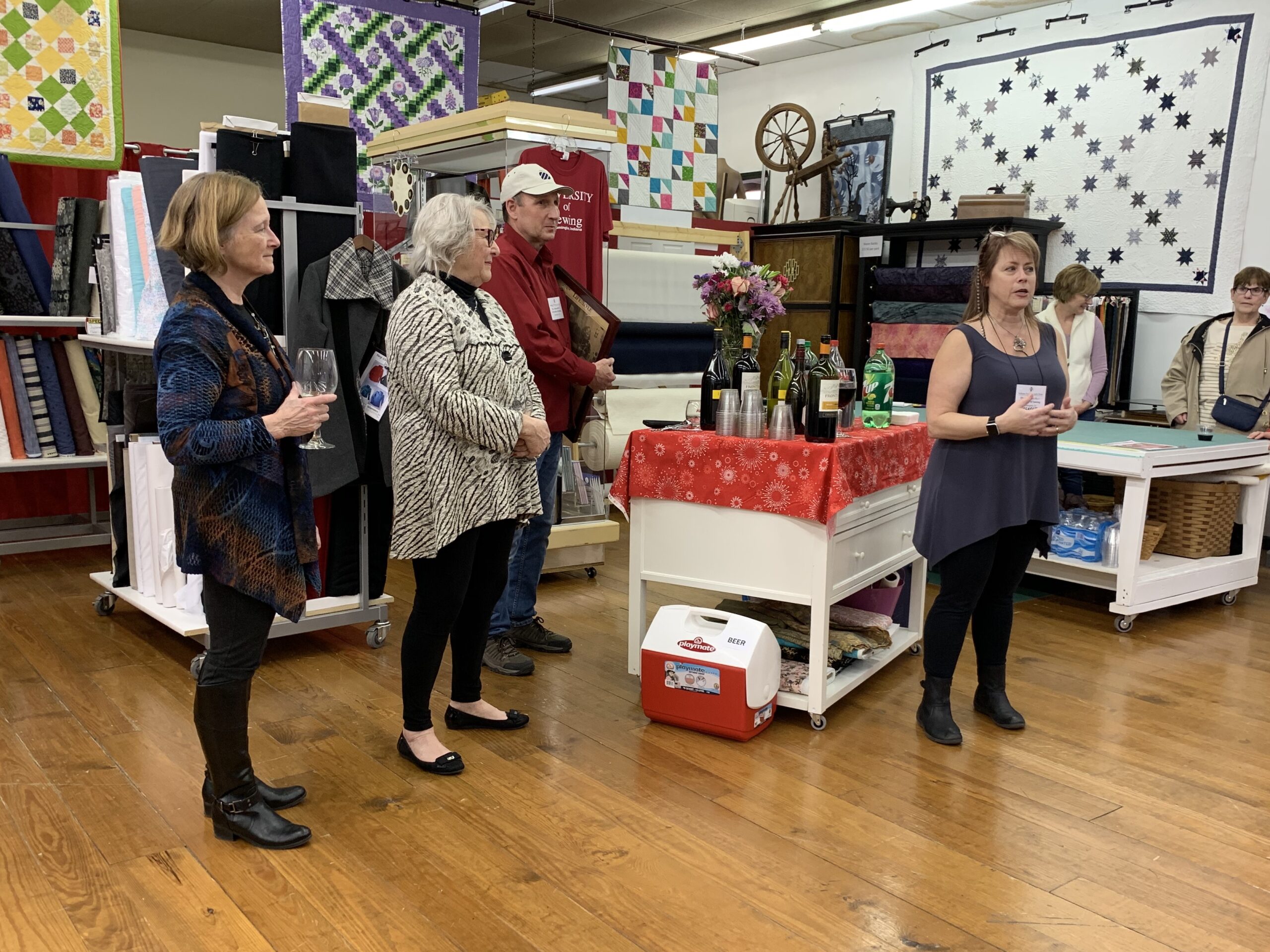 I drove home yesterday after an excellent stay in Bloomington…

But that’s not all that happened last week.

Really? I didn’t know it was ready for pre-order but there it was! 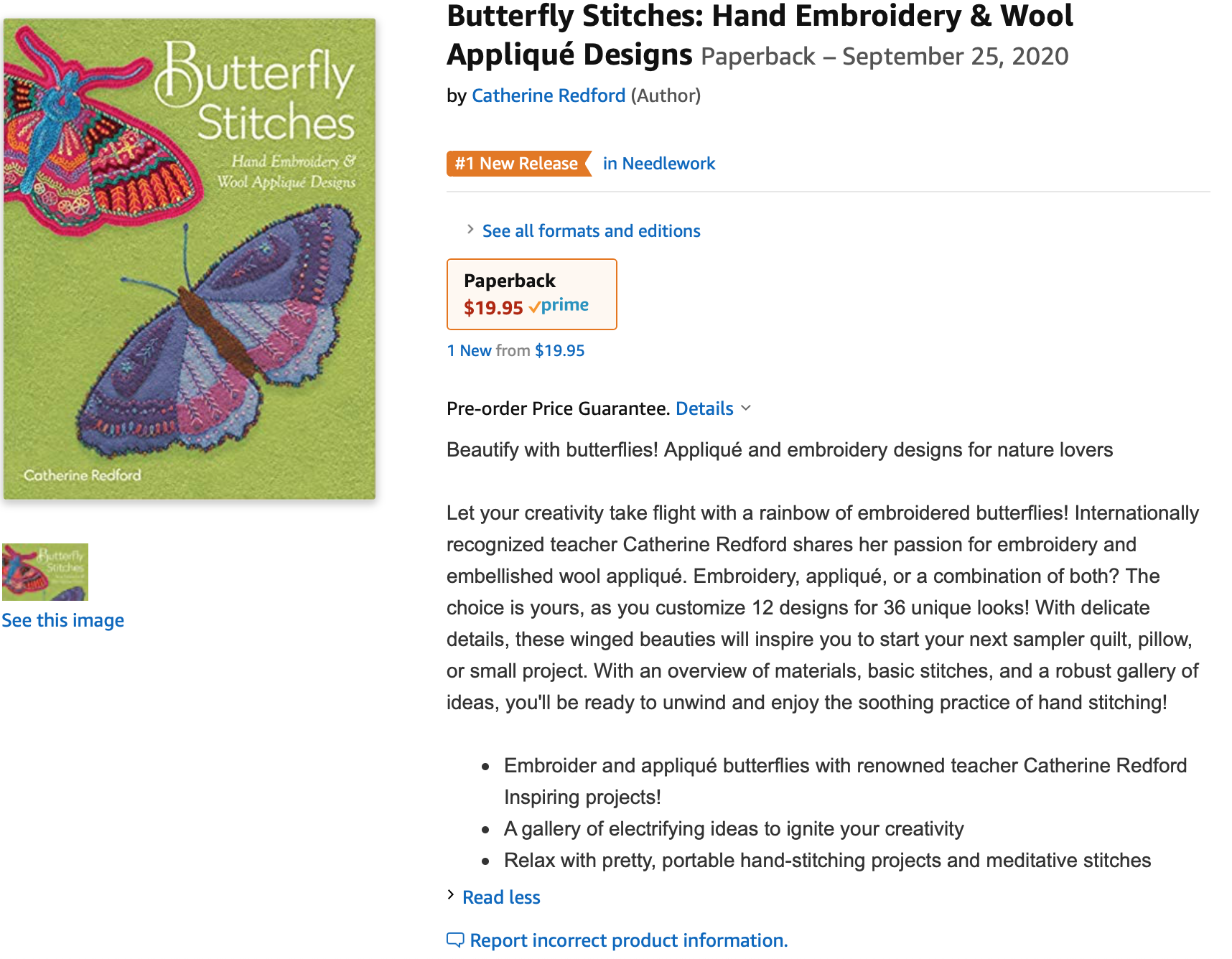 As Jonathan asked… how many books are considered a “New Release in Needlework”?

So, the cat’s out of the bag… there’s no going back now. The book has a title and it’s available for pre-order here